As winter approaches, the water temperature of Cape Cod Bay slowly drops, and sea turtles should make their way south to warmer tropical waters. However, each year since the late 1970s, some juvenile turtles do not make the journey in time. Trapped by the hook of the Cape, the turtles become disoriented. When the water reaches about 50° by mid-November, the turtles are too cold to eat, drink, or swim, and become “cold-stunned.” 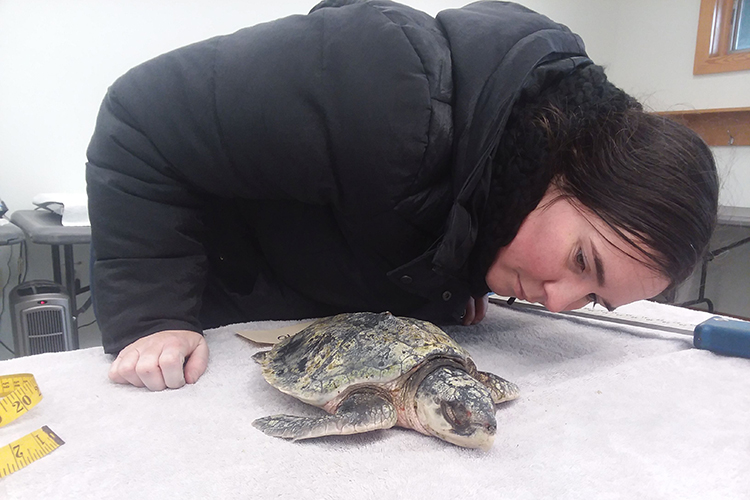 And every year, staff and volunteers from Wellfleet Bay Wildlife Sanctuary patrol the beaches, rescuing these turtles. This year is no different. Since the season began earlier this fall, Wellfleet has encountered more than 630 cold stunned sea turtles.

During the Thanksgiving freeze, when temperatures plummeted overnight, more than 220 endangered sea turtles stranded on Cape Cod. Wellfleet Bay’s dedicated team of rescuers patrolled the beaches day and night in search of cold-stunned turtles trapped in the surf, and had to deal with the full force of the weather for more than 48 hours straight.

Of the 220, only approximately 50 were alive when rushed to the wildlife sanctuary’s turtle intake unit for weighing, measuring, and assessment. Volunteer drivers were lined up to transport the turtles to the Animal Care Center in Quincy operated by the New England Aquarium, Mass Audubon’s partner in this important rescue-and-rehabilitation mission.

Typically, cold-stunned turtles rescued in November are still alive with a very good chance of recovery. But the unusual cold-snap produced conditions more common in late December when most of the turtles that strand are dead.

There’s still several months left in the season and the team on the Cape will be hard at work. Be sure to follow Wellfleet Bay on Facebook for the latest information. You can also learn more about sea turtles and how to support the Sea Turtle Rescue Project.