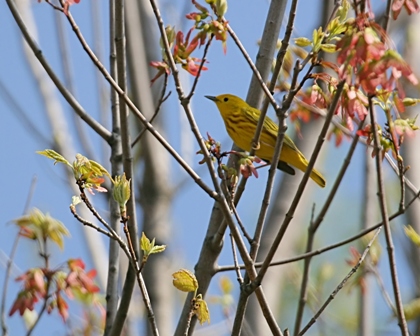 It’s the event that bird watchers around the state have been waiting for: spring migration, the time of year when birds leave their winter grounds and head north. Typically, spring migration in Massachusetts lasts from early March to early June, with the peak usually falling sometime around Mother’s Day for many species.

So where do in-the-know birders go to best enjoy this annual occurrence? In addition to our many and varied sanctuaries statewide, listed below are a few of Mass Audubon’s favorite birding spots.

Why Mt. Auburn, on the border of Cambridge and Watertown, is a “migrant trap” – a sizable area of greenery within a highly-developed urbanized area. The many trees, water features, and ornamental shrubs in the cemetery offers a safe place for birds to rest, find food, and prepare for  the next leg of their migratory journey.

How This is such a popular spot that many Mass Audubon wildlife sanctuaries offer walks through Mt. Auburn during spring migration.

Why The extensive and varied habitats of this strategically located barrier island offer ideal stopover conditions for migrants along the coast, a pathway that many migrating birds follow in both spring and fall. The combination of salt, brackish, and freshwater wetlands as well as extensive coastal thickets attracts a wide variety of species. Birders like the area because many species are relatively easy to observe on the refuge.

What Parker River National Wildlife Refuge is attractive to a wide variety of species, but especially waterfowl, raptors, shorebirds, and warblers in late spring and early fall.

Why In a state where forests grow up so quickly, and developments grow quicker still, areas of extensive grassland habitat are fairly rare especially in eastern Massachusetts. This makes Daniel Webster an important place for many grassland birds to stop during migration and also nest. It’s one of the largest regularly-maintained open grasslands in Mass Audubon’s habitat portfolio and is a popular birding destination at all times of year.

How Explore the wildlife sanctuary on your own, or join a program offered through Mass Audubon’s North River Wildlife Sanctuary, also in Marshfield.

Why The Cape Cod shoreline is often one of the first land masses that migratory birds encounter as they are moving north over the open ocean. These birds often follow the Cape Cod Bay shoreline directly to Scusset Beach State Reservation (a Department of Conservation and Recreation property), where they sometimes pause in the thickets there before turning north and continuing their migration.

What In addition to the songbirds that sometimes collect in the shrubby thickets behind the beach, seabirds like northern gannets, and sea ducks including scoters, eiders, and long-tailed ducks are regularly seen from the jetty near the mouth of the Cape Cod Canal.

How Stop by on your way to or from the Cape. Afterwards, hop back on Route 6 toward Barnstable to visit Mass Audubon’s Long Pasture Wildlife Sanctuary.

What A wide variety of birds from waterfowl and raptors to flycatchers, warblers, and sparrows can be seen. Be on the lookout for red-breasted nuthatches, blue-gray gnatcatchers, blackburnian warblers, northern waterthrushes, and bobolinks.

How Join one of the regular Friday bird walks during April and May at Canoe Meadows, run by Mass Audubon’s Pleasant Valley Wildlife Sanctuary.

And do share in the comments: What’s your favorite spots to go birding during spring migration? 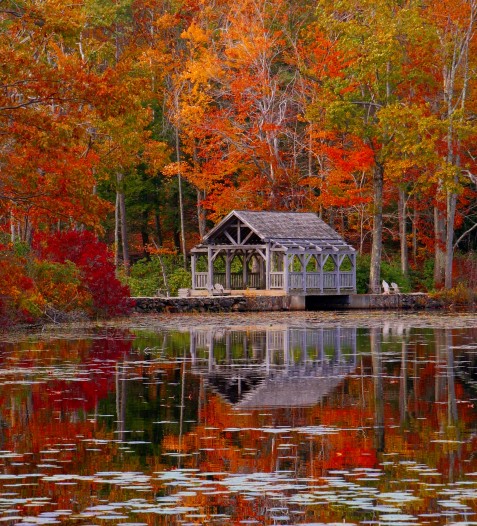 The air in Massachusetts is feeling crisp, and the leaves are beginning to turn, just in time for the autumnal equinox (when the day and night are of equal length), which falls on Saturday, September 22 this year. I love the first cool breeze, always eager to wrap myself in a cozy sweater, sip a hot cup of tea with honey, and wander through the woods.

Then again, what’s not to love about autumn? With so many incredible things taking place in nature, I savor every day before the first snow. Here are just a few things to look forward to.

1. Topping my list of fall favorites is New England’s famous foliage, a painter’s palette of lingering green, bursts of yellow, red, purple, orange, and deep brown. From the peak of a hill or a mountain, looking out at an expanse of color is a stunning reminder of just how amazing nature is. Mass Audubon is offering some especially fun canoe trips throughout the season, a great way to see the color change.

2. Some of the most delicious vegetables and fruits are ready for harvesting in autumn including apples. Many orchards offer pick-your-own, which is a wonderful way to spend an afternoon outdoors with friends, family, or simply with the quiet calm of nature. Other autumn crops are pumpkins, corn, and root vegetables such as carrots, beets, potatoes, and turnips. Grab a cup of hot apple cider, and head to your nearest farm or wildlife sanctuary, carve a pumpkin (Moose Hill and Oak Knoll sanctuaries are hosting pumpkin carving activities!), and pick-your-own pumpkins or potatoes!

3. We’re not the only ones enjoying a fantastic harvest this year. We’re seeing an abundant acorn crop, which means that chipmunks, mice, rabbits, and squirrels are busy harvesting as many acorns as possible before the winter. If the little guys are well fed, the winter will be a good season for predators such as owls, red-tailed hawks, foxes, and coyotes, too

4. Some of the best creature-watching takes place in the fall, especially as the trees shed their leaves. One of my favorite fall migrants is the common nighthawk. Not actually a hawk at all, the nighthawk can be seen migrating in flocks at dawn and dusk, typically through the beginning of October. Look to the sky just after sunset and you may see some flying overhead (hint: they’re shaped like bats earning them the nickname bull-bat). September and October are also great times to observe monarch butterfly migration, as these milkweed butterflies head south to Mexico. Throughout the season, you can enjoy great bird-watching as many different species pass through.

5. Finally, the clear night sky is best in autumn. On September 29, Uranus will be at opposition, meaning that the planet will be at its closest to the Earth, with its face fully illuminated by the sun. It will appear as a beautiful blue-green dot. Don’t forget to look out for the harvest moon, which is the first full moon of the season, on September 30. On October 20 and 21, we can look forward to the Orionids meteor shower, producing an average of 20 meteors per hour at its peak. Join a program and turn an eye to the sky this autumn!

What’s your favorite thing about fall? Tell us in the comments.