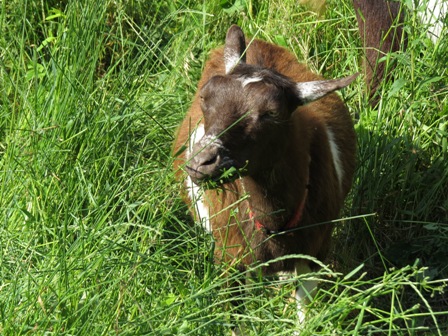 Meadows are wonderful. They are idyllic places that conjure images of rolling hills and children running barefoot. These beautiful open spaces are also home to many important species. From the grasses and wildflowers, to the insects and grassland birds, what’s not to love about meadows?

As with most things in nature, meadows are not permanent fixtures on the landscape. In fact, it takes a lot of work to maintain meadows as open space. The natural processes of succession are constantly working to turn meadows back into forests. Early-successional tree seedlings can’t resist trying to plant themselves in the abundant sunshine of meadows. Therefore, meadows must be actively managed to prevent trees from establishing and reverting the ecosystem back to forest.

Controlled wildfires are a natural way of maintaining open space in a predominantly forested landscape. However, due to the density of human settlement in Massachusetts, controlled burns are not popular management options.

If you have a lot of time, or a lot of volunteers, you can manually manage your meadow by pulling or cutting all of the woody growth as it pops up. Clearly this approach is best for small meadows, but it’s relatively inexpensive and a nice way to get to know your land really well.

Most land managers have turned to modern technology to help them keep their meadows open. Tractors pulling mowers are the most efficient means of keeping the woody growth at bay. Generally, you only need to mow once per year to knock back the seedlings that have begun to establish. Of course, it’s best to wait until August before mowing to allow the grassland nesting bird’s time to fledge. But mowing is a hot, loud, smelly job that requires a lot of expensive equipment and fuel.

Alas! There is Another Alternative

With their friendly demeanor and voracious appetites, goats are the perfect herbivore to help keep a meadow open. They gladly munch on woody growth, as well as non-native invasive species and poison ivy. For the past four summers, Habitat Wildlife Sanctuary in Belmont has been using goats to help manage its meadows with great success.

Not only are the goats adorable and a huge attraction for visitors, but they work hard. While they do require management and care, it’s a lot easier and cheaper to keep healthy goats then it is to keep a tractor in good working order.

Visit Habitat to meet the goats and see firsthand how well they are doing maintaining the meadows. It’s striking to see the contrast between where the goats have and have not browsed. And it’s great fun to watch them work…munching, munching, munching away. 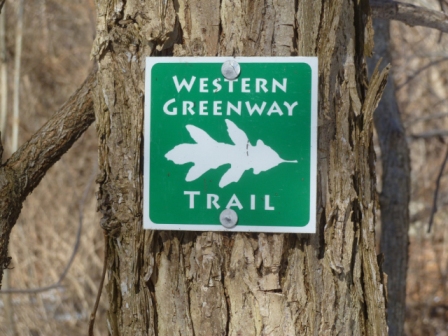 Habitat Education Center and Wildlife Sanctuary in Belmont is proud to be part of the Western Greenway, 1,200 acres of interconnected open space in Waltham, Lexington, and Belmont. This corridor is a valuable and increasingly rare resource in our region, providing natural, cultural, and recreational benefits.

The interconnected lands of the Western Greenway, 20 parcels in all, continues to serve wildlife and people. Among the many species of wildlife living here are wild turkey, foxes, wood frogs, pink lady’s slippers, painted turtles, jack-in-the pulpit, and great horned owls.

The best way to appreciate the value of the Western Greenway is to walk its seven miles of emblazoned trails between Habitat in Belmont and the Robert Treat Paine Estate in Waltham, viewable on the Greenway Map. Habitat is offering a guided walk of this route on May 4.

To learn more about or to become more involved in protecting the Western Greenway, please contact us. 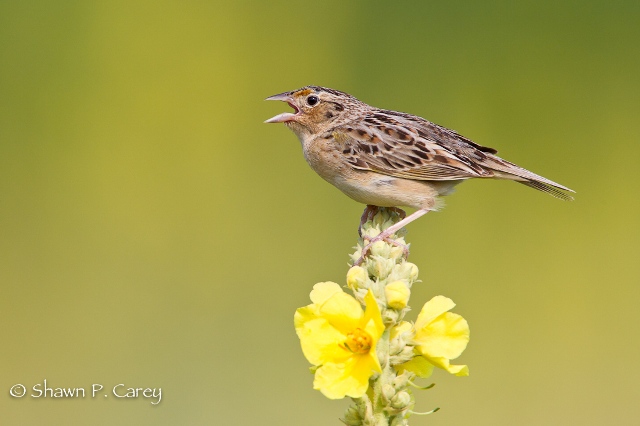 It’s a story we unfortunately hear all too often. Birds were here, and now some of them are not. This is especially true for Grassland birds (i.e. birds that breed in open fields of 25-plus acres). According to our recent State of the Birds report, these birds are by and large, declining—some of them precipitously so.

But in the case of one Grassland bird, the state-listed Grasshopper Sparrow, we have some exciting news to report! It all started back in 2004, when our Ecological Extension Service (EES) joined forces with the City of Worcester and the Casella Waste Management Company to re-cap the 35-acre Greenwood Street Landfill while maintaining Grasshopper Sparrow habitat.

For those who are unfamiliar with EES, it’s a program through which Mass Audubon shares with conservation partners (land trusts, cities and towns, state and federal agencies) the considerable expertise we’ve developed in managing 34,000 acres including habitat restoration.

The landfill was originally closed and capped in 1986, and the meadow that developed became Grasshopper Sparrow breeding habitat (eight males were observed there during our 1997-2000 statewide Grassland Bird Survey). But when the old landfill cap began to settle, the whole site needed to be re-graded and re-capped. EES proposed a phased approach to re-capping and supervised the 2010 restoration of the first re-capped area with a native grass seed mix.

In regular monitoring visits, our EES team observed Snow Buntings, Eastern Meadowlarks, Bobolinks, and American Kestrels passing through and making occasional use of the site. But they still had their ears peeled for the elusive tik tuk tzeeee of the Grasshopper Sparrow.

This year, as EES staff visited almost weekly, some people wondered whether this bird that had complicated the project was ever at the landfill in the first place. Well they were, and now they’re back!

In early June, two males were observed singing in the restored grassland and defending territory from each other. No females yet, but with these territories featuring lots of little bluestem and dramatic views of Route 146 and the wastewater treatment facility, can they be far behind?

Since this site is considered smaller than the optimal habitat patch size for Grasshopper Sparrows, we hope to continue to monitor the site to assess whether they are successfully breeding. The remaining sections of the landfill will be re-capped and restored in 2013 and 2014. If all goes well, the newly capped landfill will once again provide habitat for Grasshopper Sparrows and other grassland birds.

The Greenwood Street Capping Project is currently an active construction site. Access is restricted to authorized personnel and construction-related activities only.