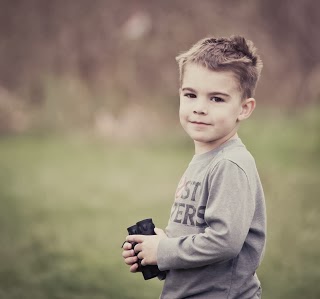 More than 800 birders took part in Bird-a-thon, Mass Audubon’s annual fundraiser where teams spend 24 hours competing to see (or hear) the most species. But this year Owen Lawson, age 6, stood out.

Along with his dad, Justin, the first-grader at the Elmwood Street Elementary School in Millbury recorded 102 species, and raised $230 for Broad Meadow Brook Wildlife Sanctuary in Worcester.

But Bird-a-thon is just one part of Owen’s master plan. Since the beginning of 2014, he’s been pursuing his own “Little Big Year” in New England. (“Big Year” refers the quest by birders to identify the most species in North America in a calendar year.)

Owen’s original goal for 2014 was 200 species. But as of today, he’s already at 220! Many of these species were spotted using a pair of well-worn binoculars. “I use my grammy’s,” Owen said. “It’s much easy to pick up, because my dad’s is more heavier.”

Speaking of dad, it’s little surprise that Owen’s favorite birding partner is his father, who serves as trip planner, driver, and bird mentor. “When I go with my dad, I see lots of stuff,” he said.

For Justin Lawson, birding is a serious avocation, but his wishes for Owen are to see beyond the birds, to make a broad connection with nature. “I want my sons to be educated about the outdoors, but more important, develop an early appreciation for it.”

Owen is already on his way emulating his father as a birding mentor. “I think when I grow up I want to tell my kids about birds,” he said. “And I always make sure to tell my little brother when I see a bird.”

Justin is clearly doing a good job. In addition to birds and birding, Owen is intrigued by tide pools, and the critters he spies in the shallows. A whale-watch is on tap for this summer. And he plays on baseball and soccer teams.

As Owen puts it, “I guess I just like running around and looking at stuff. And up at the sky.”

Some Owen the Birder fun facts:

Follow along on Owen’s Little Big Year by checking out the Lawsons’ blog, which includes pictures taken by Owen and check out his fundraising page.

1 thought on “Meet Owen the Birder”