American Woodcocks are back! Even when spring arrives late, woodcocks still perform their remarkable sky dances. In March and early April, these fascinating, awkward-looking birds put on a mating display at dusk.

The best part: it’s easy to view this display in any large brushy field, including some city parks. 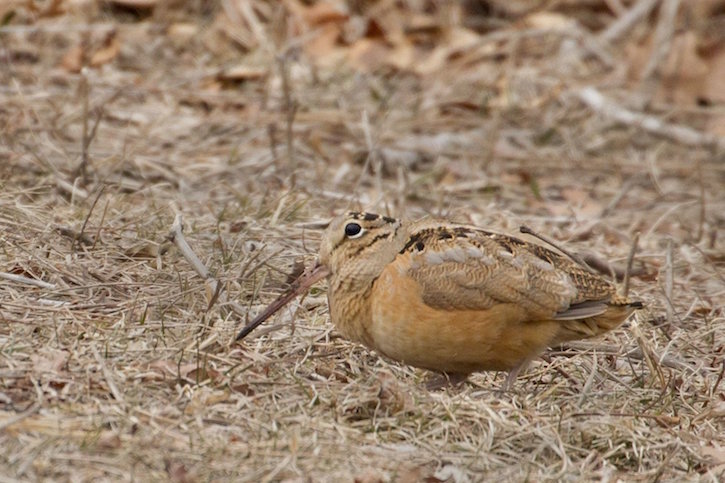 American Woodcock by Will Freedberg

Keep an ear out for a woodcock’s sharp, nasal “peent!” from sunset to half an hour afterwards. The woodcock will take off after a few calls, wheeling and diving in the sky as their wings produce their signature twitter. Then, the bird dives steeply, its wings continuing to whistle as it falls to the ground to start over.

To help you track down these enigmatic birds, here’s a list of Mass Audubon’s upcoming guided woodcock walks, plus some sites in greater Boston to look for them by yourself.

Join a walk if you want some help finding woodcocks or just enjoy the company of a group of nature lovers. Experienced naturalists will make sure you don’t miss a peent!

1. In Greater Boston: March 30 and April 6 at Broadmoor (Natick); March 31 and April 14 at the Blue Hills Trailside Museum (Milton); April 3 for adults and April 7 for teens at Drumlin Farm; April 8 at the Boston Nature Center (Mattapan).

2. On the South Shore: March 28 and April 4 at Birchwold Farm (Wrentham) with Stony Brook; April 7 at North River (Marshfield).

4 Parks to Seek Woodcocks in Greater Boston on Your Own

5. West Roxbury: Millennium Park
This former landfill became a great birding site after it was covered with soil from the Big Dig and reclaimed by native grassland. Search for woodcocks along the northwest and southwest edges of the park and by the canoe launch.

6. Boston: Franklin Park
Park off of Circuit Drive. The best area is through the open area towards a softball field.  Sometimes, woodcocks display in the sports fields off of Pierpoint Drive to the north.

7. Cambridge: Alewife Reservation
Most woodcocks are found by walking the path between Bullfinch Parking Lot (off of Acorn Park Drive) and the T station.

8. Belmont: Rock Meadow
Rock Meadow is best accessed from a small parking lot on the West side of Mill St. south of its intersection with Concord Ave. Walk the path into the adjacent field about 400 feet, passing the community gardens on your left. The woodcocks will be displaying on your right, but can be found further into the meadows as well.

2 thoughts on “8 Ways to Watch Woodcocks”