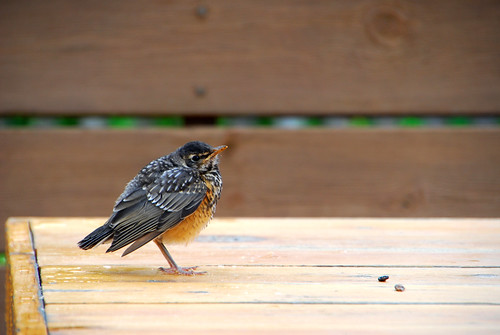 If there’s one question people ask us the most this time of year, it’s some variation of “I found a baby bird—what should I do?”

And we get it. When you come across a helpless-looking baby bird out of its nest, it’s hard to resist the overpowering urge to come to the rescue. But if you really want to do your part, it’s usually best to leave it be. How do you know when to take action and when not to? For that, you need to know the growth stages that many baby birds pass through.

The Stages
This time of year, a baby bird falls into one of three categories:

Helping Hatchlings and Nestlings
If you find a hatchling or a nestling on the ground and you can see its nest, you should try to safely return it. Contrary to popular belief, the parents will not abandon a young bird that smells like people. If there’s no nest, you can make one by fastening a wicker basket to a branch.

It’s never a good idea to bring a baby bird home and try to raise it. In fact, federal law prohibits anyone from having wild birds in their possession. Law aside, a baby bird, cared for by untrained people, once released, most likely won’t survive as well in the wild. It has missed key lessons from its avian family, like how to locate food and avoid predators.

Giving Fledglings Room to Grow
For fledgling encounters, the best course of action is to leave it be. There’s only one exception: if it’s obviously injured.

As awkward as a fledgling bird may look, this is natural stage, and the parents are most likely nearby, hunting for food and keeping watch. If the bird’s in immediate danger, you can put it in a nearby bush or tree.