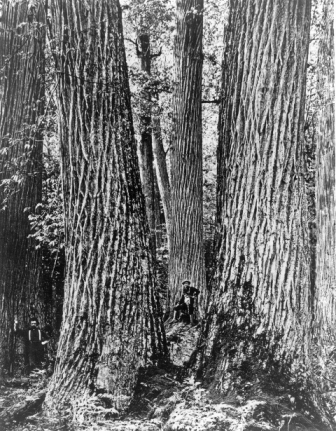 Once upon a time, the American chestnut was king.

Some 100 years ago, this tree dominated the eastern forest from Maine to Georgia. It was the most numerous tree in the forest (one of every four hardwood trees was a chestnut). It was the biggest tree, sporting massive trunks up to 10 feet in diameter and reaching 100 feet high. And it was the most important tree, supporting every material need of humans and wildlife.

“At last when the tree can serve us no longer in any other way it forms the basic wood onto which oak and other woods are veneered to make our coffins,” said forester, P.L. Buttrick, in 1915 (Mighty Giants, p.67).

The American chestnut exemplified the cradle-to-grave concept, literally. So what makes this tree so useful?

Blighted by Blight
Then one of the greatest natural disasters in forest history struck. In 1904, a devastating fungus was discovered on chestnut trees in New York’s Bronx Zoo. Within a few decades, the chestnut blight had killed over 4 billion chestnut trees on more than 200 million acres in eastern North America.

Today, you can still find chestnut trees in your local woods, but they are usually stumpy sprouts that rarely reach more than 10-20 feet high before succumbing to the blight. The roots of the tree continue to live and send out sprouts, but the tree will never grow tall and majestic like its ancestors.

By backcrossing the American chestnut with Asian chestnuts (which are naturally immune to the blight), the goal is to create an American chestnut that is blight-resistant but almost completely American, with all the strong qualities of the majestic trees of a century ago.

Wachusett Meadow’s demonstration orchard hosts five young seedlings, several generations into the breeding program. These five seedlings may not hold the key to the future in their DNA, but their presence will raise public awareness about the American chestnut and restoration efforts. Come see for yourself: An interpretative sign at the start of the South Meadow Trail points the way!

Want to learn more about the American chestnut?

Photo: American chestnut circa 1910 Courtesy of the Forest History Society

8 thoughts on “What Happened to the American Chestnut?”