Some species of threatened open-country birds are expanding into new habitat created for them at Elm Hill in Brookfield, a Mass Audubon sanctuary focused on providing shrubland, grassland, and young forest.

Prior to this year, Elm Hill was defined by a patchwork of forest and overgrown agricultural fields, some of which were separated by thin strips of woodland. This landscape offered the perfect opportunity to demonstrate how carefully planned, ecologically mindful forestry can improve habitat for declining open-country birds.

Habitat management at Elm Hill focused on joining fields together to create larger expanses of open space. This work wrapped up last winter, and the list of bird species using the sanctuary is already starting to reflect changes in the landscape.

A flock of at least 200 Bobolinks was recently spotted gathering in the new, larger shrubby fields. This doesn’t necessarily mean Bobolinks are breeding at Elm Hill, but it does mean the sanctuary can provide valuable staging habitat as these birds feed and gather ahead of migration.

Bobolinks are one of several dozen Massachusetts bird species that rely on big expanses of early-successional habitat—open habitat in the early stages of regrowing into forest. Early-successional habitat is a natural but temporary part of the local landscape—without fire or other disturbance, forest re-grows and matures. With small-scale agriculture and natural fire cycles giving way to development and fire suppression, birds that rely on these kinds of habitat are declining.

Other species that rely on early-successional habitat were also spotted at Elm Hill during this summer’s nesting season, like Prairie Warblers and Eastern Towhees. Prairie Warblers were entirely absent from the sanctuary during three years of bird surveys before Mass Audubon began forestry work there.

While small fields (like any habitat type) are great for certain birds, the pickiest early-successional habitat specialists avoid them. Nesting too near the edge of mature forest increases opportunities for predators that like to hunt open-habitat species from high perches—so certain birds rely on having big, expansive open areas far from the forest’s edge.

Expanding shrubland or young-forest habitat requires a trade-off with standing trees, so it makes the most ecological sense in areas with low-quality forest habitat. Field borders at Elm Hill used to include a lot of red pine and invasive vines, which in central Mass host a limited range of birds—mostly generalists that use other habitat types too, like Tufted Titmice and American Goldfinches.

Other parts of the sanctuary were left untouched, including mature bottomland forest with few invasive plants. These ecologically valuable forests host birds that rely on older trees and higher plant diversity, like Pileated Woodpeckers and Scarlet Tanagers.

Now that the work at Elm Hill is done, we can watch new species arriving and share and implement what we learned. Our Forestry for the Birds program is dedicated to teaching other landowners across the state about bird-friendly forestry. 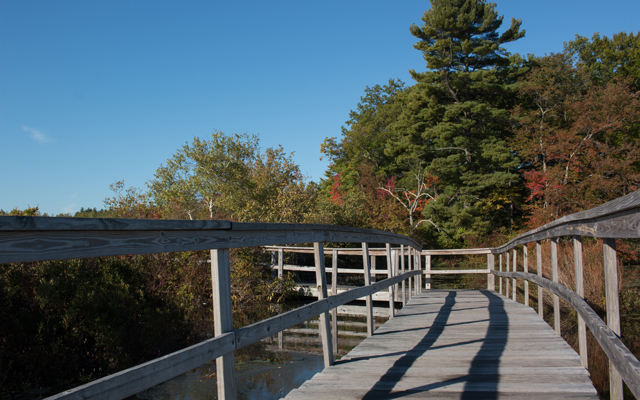 If you’ve ever been to Stony Brook Wildlife Sanctuary and the Bristol Blake State Reservation in Norfolk, you’ve most likely walked the 525-foot-long boardwalk. When this iconic feature, which takes you to Beech Island, was first installed more than 40 years ago it immediately captured the devotion and enthusiasm of people fascinated by the beauty of the wetlands and the diversity of life that could observe from it.

Over the years the boardwalk has been improved in many ways. Railings on both sides were installed, rotten planks were replaced, and pilings were stabilized. In 2010, Mass Audubon partnered with the Department of Conservation (DCR) and the Student Conservation Association (SCA) to do a major overhaul on the boardwalk with improvements being made along its entire length.

Even with all this attention, winter weather ultimately took its toll and an engineering inspection in March 2016 determined that the boardwalk was too dangerous to remain open. DCR closed the boardwalk.

But it wouldn’t be for long. DCR knew the benefits outweighed the cost of replacement and immediately set out to replace the boardwalk. Their strategy was to not only make it safer for people, but also for the wetlands it traverses. By raising it higher off the water and replacing all of the pilings with smaller helical anchors that provide a stronger support, the impact of the boardwalk will be reduced dramatically. An added benefit: visitors get a higher vantage point to view the wetlands. 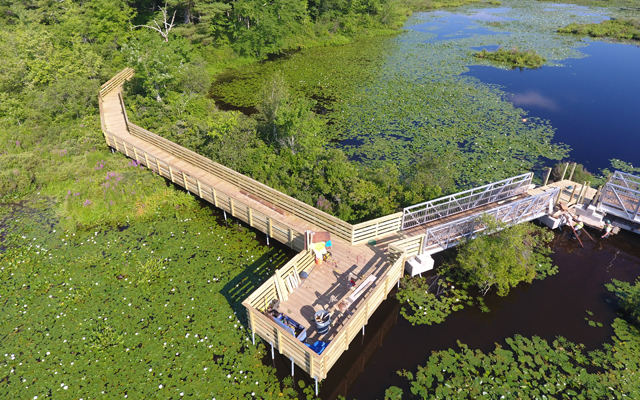 For months, we anxiously watched and waited. Fast forward to August 7, 2017. After a final visit, State Inspectors gave their thumbs and tore the caution tape down. The boardwalk is now officially open and we are planning a brief ceremony on Saturday, August 26, at 11 am.

Thanks to everyone for your support, patience, and encouragement. Bristol Blake State Reservation and Stony Brook Wildlife Sanctuary are open daily from sunrise to sunset. We look forward to seeing you out on the boardwalk soon! 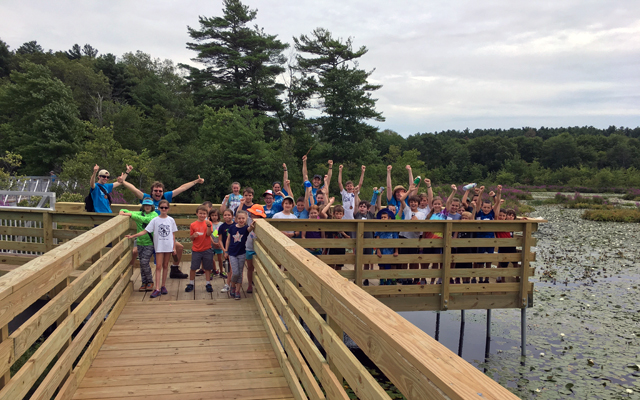 Stony Brook’s campers celebrate the opening of the boardwalk.