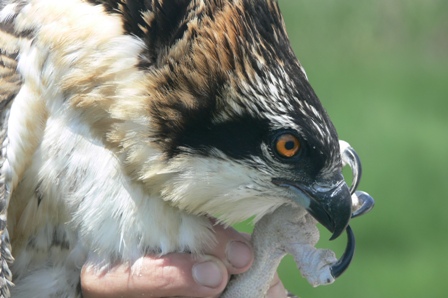 Have you ever seen a hawk-like bird swoop down in the water, diving for fish? Chances are it’s an Osprey. These raptors once dubbed “fish hawks” are in a family all by themselves and can be found on six of the seven continents (both in fresh and salt water).

In Massachusetts, you will start seeing them in late March, reclaiming or finding new nesting platforms. By September 15, they’re on their way south again. And while the state now has an abundance of ospreys, this wasn’t always the case. A look back:

Ancient History
Think of what hadn’t happened by 1620. The land hadn’t been cleared for agriculture, so waterside nesting possibilities (on dead trees) were endless. And fish populations hadn’t been decimated, so food sources (an Osprey’s diet consists of 99 percent fish) were abundant.

Twentieth Century
We know Osprey nests remained in Massachusetts by 1900. Swansea chicken farmers had learned that Ospreys would vehemently protect their nests from hawks, so they coaxed them to nest on their lands. The sphere of protection thus created protected the chickens.

By mid-century, pesticides began causing nest failures, dropping the statewide population to 11 pairs. The banning of such chemicals and a nest platform construction program on the South Coast led to the rejuvenation of the Osprey population in Massachusetts. As of 2011, there were more than 200 Ospreys in Massachusetts. 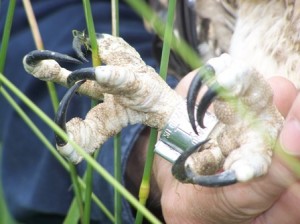 Locating Ospreys
The best places to see Ospreys in Massachusetts are along the South Coast, Cape Cod, and the Islands. Here, many of our wildlife sanctuaries run Osprey monitoring programs including Allens Pond, Wellfleet Bay, Long Pasture, Felix Neck, and the South Shore Sanctuaries. Volunteer monitors are asked to report on the “phenology” of the birds: the timing of the events of their lives. When do they return to the nest? How long do they take to build or strengthen their nests? When do the eggs hatch? When do we see the first youngsters? When do the little ones fledge?

Learning More
In order to really understand the Osprey, Mass Audubon staff members band Osprey chicks every July. Banding involves placing harmless metallic bands around the lower portions of the legs of the young birds with unique tracking numbers so we might learn more about the individual life of the bird, and more generally about the species in total. Often, monitors are invited to the banding, and get the opportunity to meet “their” Ospreys face-to-face. It’s a remarkable moment.

Get Involved
Most Osprey monitoring projects are low-impact, opportunistic affairs, although protocols vary from sanctuary to sanctuary. We really just need to continue gathering as much data as possible so that we can continue to learn about these wonderful birds. Get involved today by contacting one of the wildlife sanctuaries mentioned above.

Learn more about Ospreys at one of these upcoming programs or by following Mass Audubon’s Westport Osprey Blog.