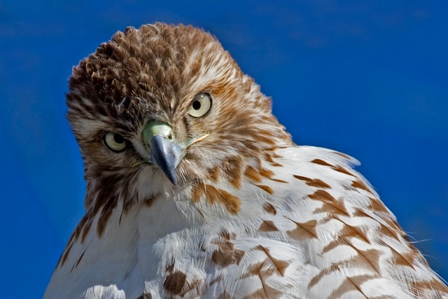 Although many birds migrate during the fall, hawks are especially impressive to watch. In fact, fall migration potentially offers the best opportunity to view a variety of hawk species in greater numbers than any other time of year as the birds make their way across the skies of Massachusetts on their way south for the winter.

Fall migration technically starts in August when small numbers of hawks begin to migrate, but the best time for see large numbers is in September. Most numerous is the broad-winged hawk, which under the right conditions can sometime be seen in flocks, or “kettles,” containing hundreds, or occasionally even thousands of birds. Among some of the other commonly seen migrants are the sharp-shinned hawk, American kestrel, osprey, northern harrier (formerly called marsh hawk), and turkey vulture.

The total number of migrant hawks diminishes somewhat by early October, but you are more likely to see some of the larger, less common species. These include the cooper’s, red-tailed, and red-shouldered hawks; golden (rare) and bald eagles; peregrine falcons; and merlins.

The fall migration continues through October and into November, with northern harriers, northern goshawks, increased numbers of red-tailed and red-shouldered hawks, and rough-legged hawks bringing up the rear. Some of these late migrants are also found wintering in Massachusetts.