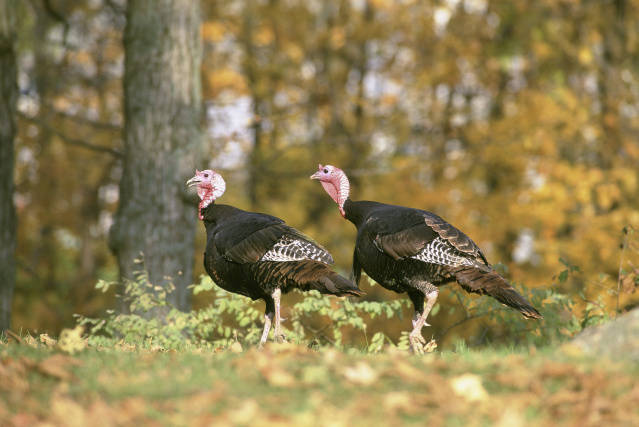 As Thanksgiving fast approaches, the thoughts of many Americans turn to the humble turkey. Our modern domesticated turkeys (the ones we generally eat) have something of a reputation for being foolish and clumsy birds. Their wild cousins, however, roam the woods and towns of Massachusetts even today, and these birds are fast, wary, and remarkably complex.

Gobble: When looking to attract females, males display by strutting, puffing out their feathers, and, of course, gobbling. Young turkeys of both sexes gobble, but as they mature, males become the more frequent gobblers.

The gobble itself is purely a vocal sound, just like crowing in roosters. Turkeys gobble in two peaks each year: early spring when flocks go their separate ways and males stake out territory, and late spring when the hens that bred earlier are nesting while the unbred hens are looking for mates.

Snood & Beard: Males develop a fleshy, retractable feature called a snood, which overhangs the bill, and a bundle of dark feathers that hang down below the neck called a beard. Female turkeys also show these features, but they are less well-developed.

Poults: After a female has mated, she digs a scrape in the dirt or leaves and lays about a dozen eggs, which she must incubate for 26-27 days before they finally hatch! Once the poults (turkey chicks) do hatch, they are able to run around and forage for themselves after 24 hours, although the mother still feeds them for some time.

Jakes: Young male turkeys are known as jakes. They strike out from their families during autumn of the year that they’re hatched, while young females will often stay with their mothers until the following spring.

Plumage: Turkeys in the wild are well-equipped for avoiding predators. Their dark, mottled feathers (known as plumage) allows them to hide effectively in dense undergrowth, and even when discovered they are fast runners.

Roost: While turkeys cannot fly for long periods, they have been clocked at over 50 mph in flight and are more than capable of escaping into the highest branches of the forest canopy, where groups of turkeys will gather in a roost for the night to stay out of the reach of ground predators.

Repatriation: Wild turkeys may be common today, but around 1850, no wild turkeys could be found anywhere in Massachusetts. In addition to hunting pressure, the loss of wooded areas to farmland also drove the turkeys out. The turkeys that we see today are the result of a successful repatriation program, in which turkeys from other areas (such as Pennsylvania) were released in Massachusetts to establish themselves once again.

Happy Thanksgiving from all of us here at Mass Audubon! Gobble Gobble…

Photo via US Fish & Wildlife Service