Back in 2013, Owen Cunningham considered himself pretty knowledgeable about nature. But when he decided to tag along with Moose Hill team during Bird-a-thon he realized how much there was to learn. 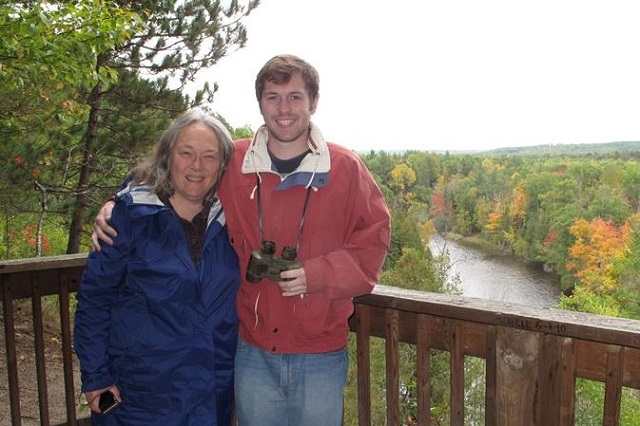 Owen and his mother, Kathleen Guilday

“If you would have asked me then how many species of bird I thought were native to our state I might have guessed around 50,” he said. “But Mass Audubon counted 270 different species in 24 hours that year! I could not believe how little I knew of the native wildlife I had spent my whole life around. From that day, on I began keeping my own list to help me appreciate all these species I had been taking for granted.”

This year, he is doing more than just keeping a list. As the new property manager for the Museum of American Bird Art (MABA) in Canton, he inspired the sanctuary to participate in the fundraising and birding competition for the very first time.

The team has a modest goal of raising $3,000 to help support the 121 acres of conservation land for people, birds, and other native Massachusetts species as well as MABA’s expanding art collection and exhibitions, which are wonderful reminders of “how inspiring and beautiful our natural world is so long as we work to protect it.”

Check back after May 13 to see just how many species Owen and his teammates see!

Want to get more involved in Bird-a-thon? Join a team to create a fundraising page and/or contact a team captain to join a birding roster. Can’t participate in Bird-a-thon this year? Consider donating to a sanctuary or program team. 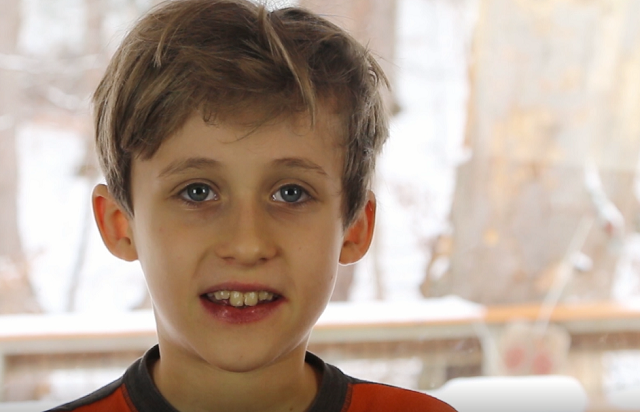 He’s 9 years old and a booster for Arcadia’s Bird-a-thon team. He’s hoping to raise $500 to help Arcadia manage its grassland and forests to help local wildlife like the bobolink, the kestrel, and the eastern meadowlark.

“I feel happy when I feel close to all the different birds chirping, and all this life. Animals are just 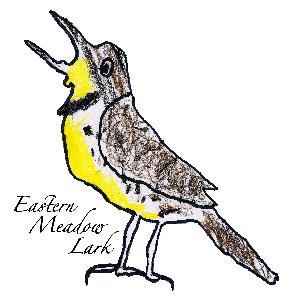 like people. They have lives, go about their daily business, raise families, and make homes,” he wrote on his fundraising page. “Each needs a special place to do these things. Mass Audubon is helping make that possible, and I am happy to be helping too.”

To help spread the word, Kaiden coded his very own web-app called a Day at Arcadia (click the grass if it gets too tall and a special mower will come to assist you), drew an eastern meadowlark, and starred in a video that explains just what it means to be a Bird-a-thon booster.

Get involved in Bird-a-thon by joining a team to create a fundraising page and/or contacting a team captain to join a birding roster. Can’t participate this year? Consider donating to a sanctuary or program team. 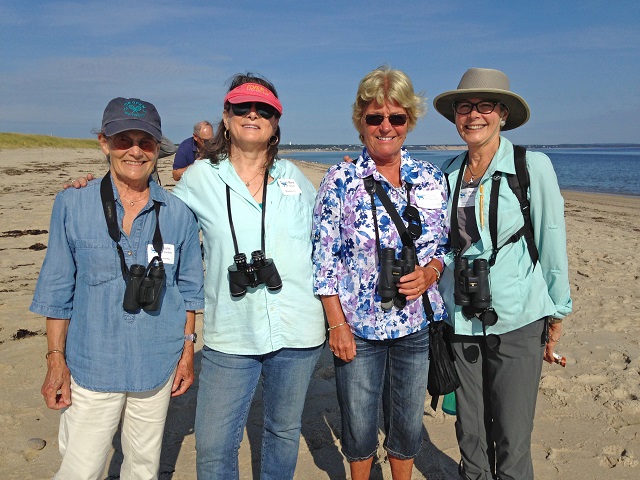 The idea for the Lame Ducks was hatched in 2011. At that time, there were several extraordinary women who were committed to the Wellfleet Bay Wildlife Sanctuary but didn’t consider themselves “real” birders.

Wellfleet Bay’s special events coordinator thought “What if we offer these women the opportunity to become better birders? Would they commit to fundraising for Bird-a-thon?” The answer, she soon found out, was a resounding yes.

Since then, Sanctuary Director Bob Prescott and other sanctuary staff have led the “Lame Ducks” (as the team was named) on a series of birding outings each spring to increase their bird knowledge and identification skills.

In return, what began as a small, laid-back clutch of mixed-ability birders has fledged into a fundraising powerhouse, regularly contributing one-third to one-half of Wellfleet’s Bird-a-thon total. And along the way, the flock has become just as competitive about their birding ability and species counts as they are about their fundraising prowess.

Although the individual lame ducks have come and gone as families relocate and personal situations change, most of the original members are still birding and fundraising for Wellfleet’s Bird-a-thon team and we are so grateful for their participation. 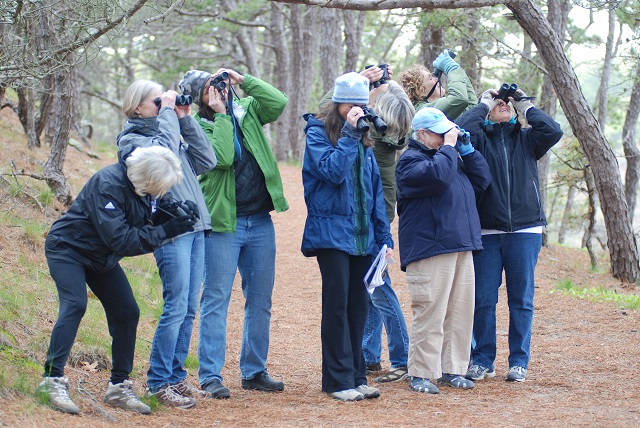 Want to get more involved in Bird-a-thon? Join a team to create a fundraising page and/or contact a team captain to join a birding roster. Can’t participate in Bird-a-thon this year? Consider donating to a sanctuary or program team. 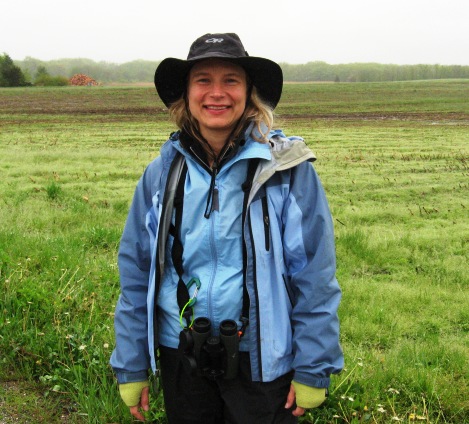 When it comes to raising money for Bird-a-thon, Mass Audubon’s fundraiser where teams of birders compete for the most species seen in 24 hours, Kathy Seymour is one to watch. For 9-plus years, Seymour has taken home the coveted Top Individual Fundraiser prize, awarded for raising the most money as an individual.

“Around 2001, I was a beginning birder and started taking programs at Joppa Flats Education Center in Newburyport. At that time, I was so focused on my job, I didn’t have much knowledge of birds or habitats or conservation. The programs opened my eyes to the wonders of the natural world and gave me an opportunity to make deep and lasting friendships. For the first time I saw how much an organization, and specifically one person’s vision within that organization, can change someone’s life. I wanted to give back.

Fortunately, I work for a very philanthropic company that encourages its employees to have causes and promotes a culture where fellow employees enthusiastically support one another. Even more, they match employee donations. So I joined the Joppa Bird-a-thon team and started raising money for them.

At first I was apprehensive and didn’t want to ask people for money. But I found enough courage to send an email to the people I work with. Then the most wonderful thing happened—I found fellow birders that cared about the same things I did, and I now had the chance to connect with my coworkers every day. Even people who didn’t know much about birds would show support and ask me about the event.

By 2005, I was also taking a lot of birding programs at Drumlin Farm, which is very close to my home. I was “recruited” by Drumlin to help run their team, along with Strickland Wheelock. At that time, Drumlin was looking for ways to increase fundraising after a key fundraiser left for college. Here was my chance to really make a difference, not just personally, but by involving others in the process. Bill Gette, sanctuary director at Joppa, gave his blessing, and off I went.

Our goal that first year was to try and raise $12,000 ($7,000 more than Drumlin’s previous effort). The hope was to buy a new van, since their current one was on its last leg. Strickland and I realized that our best chance to meet the goal was to get as many people fired up about the event as possible. Strickland reached out to his extensive contacts in the birding world and I recruited my friends. We quickly got together a team of 50 birders who were excited to try and beat the all time Bird-a-thon species record.

But just having a team wasn’t enough. It’s pretty easy to get birders to go out birding—getting them to raise money was another challenge. I knew that we needed to inspire people with a good cause (a working van for field trips) and we needed to appear very organized to show that we were all working hard together for the cause.

We held a team meeting, and handed out checklists and fundraising materials in folders (folders gave the impression that we were organized). Then I got up, talked about the cause, and shared how I got over my fear of asking for money and how it even provided a new way to connect with colleagues and friends.

All of a sudden, people were fundraising who hadn’t done it before. Crazy things that we never expected started to happen, including a single donation for $1,000. That year, we raised $24,000. (I had to check the math in my spreadsheet at least 5 times!) The word on street was that no one would be able to out-raise Joppa Flats. So our goal wasn’t to beat them, but to at least have them looking in their rear view mirror. But to everyone’s surprise, we came out on top.

Fast forward 9 years, and our Drumlin Bird-a-thon team has funded five vans, loaner binoculars, a top-of-the-line Swarovski scope, digital projection equipment, a birding info kiosk, an extensive bird feeding area, bird banding equipment, and youth birding clubs—essentially everything you need to run a great birding program. Now we can use our fundraising for conservation projects to help the birds that brought us all together in the first place.

And speaking of those birds…Bird-a-thon is all about doing crazy things you wouldn’t normally do, like birding for at least 21 of the 24 hours. Standing in a salt marsh before dawn, smelling the sea air, surrounded by singing saltmarsh and seaside sparrows, and watching the marsh birds wake up with the sun—there’s nothing better!

Will Joppa or another sanctuary out-fundraise Drumlin this year? The competitive part of me would be a little bummed, but it would be great for that sanctuary and Mass Audubon as a whole. How could that be bad?”

Learn more about Bird-a-thon and how you can get involved. Have you participated in Bird-a-thon before either birding, fundraising, or donating? Share your story in the comments!