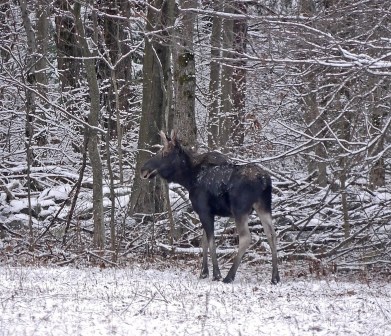 Earlier in the season, nature photographer and Mass Audubon volunteer extraordinaire, Richard Johnson, set out to photograph a moose that had been spotted at Wachusett Meadow Wildlife Sanctuary in Princeton, Massachusetts.

Waiting patiently from the safety of his car, telephoto lens ready, Richard snapped this photo when the moose appeared at the edge of a sanctuary meadow. The announcement and photograph on Facebook generated much excitement and many folks expressed surprise that moose were in Massachusetts.

Hiding in Plain Sight
According to MassWildlife, there may be 1,000 or more moose living and breeding in Massachusetts. At Wachusett Meadow, there have been sightings for more than a decade. But that wasn’t always the case.

Back in the early 1700’s, much of Massachusetts’ forests had been cleared for farming. Since this habitat is essential for moose, they moved on, all but disappearing from our borders. Fast forward to the present, Massachusetts is the 8th most forested state in the country. So it’s not surprising that moose join the growing list of animals, including fishers, eastern coyotes, wild turkeys, and beavers that have returned to our neck of the woods.

For the most part, moose can be found in central and western Massachusetts. Rarely, a moose may even be spotted in the eastern part of the state, like the young moose that wandered through a backyard in Wellesley in June.

If You See a Moose
You’re most likely to see a moose in September and October during breeding season (when males go in search of a mate) and again in May when the young of the previous year leave their mother before she calves again.

It can be thrilling to see such a large, beautiful animal in the wild, but be careful! “While not aggressive by nature, moose can pose a threat at certain times of the year,” says Bill Davis, District Supervisor with MassWildlife. “Males entering their breeding season could react if people approach, he notes. Likewise females with calves can be very protective and defensive. Watch and enjoy moose always from a respectful distance.”

If you do see a moose, please report your finding to MassWildlife to help them continue to monitor moose populations. And if you see a moose at a Mass Audubon wildlife sanctuary, let us know!

Want to learn more about wildlife in the winter?
Take a Mass Audubon tracking class this winter and learn to recognize tracks and scat of moose and other winter animals.