Ducks to the starting line! Ready…set…float!

If you aren’t familiar yet, Duck Derby is a fun annual event where thousands of rubber ducks—sponsored by individuals just like you—are released on an incoming tide for an epic race from Buzzards Bay into Allens Pond.

This Thursday, August 19 from 12:30–2:30 pm, they’ll fight their way to the finish line with fierce determination. The first five to cross win Grand Prizes, and many other lucky ducks will claim fantastic runner-up prizes, including a special honor for the “Slacker Quacker” (the last duck to finish the race). Twenty fabulous prizes are up for grabs, including $5,000 cash!

Entries start at just $10 and all proceeds support Mass Audubon, so every entry is a win for the nature of Massachusetts. But don’t delay! Online duck sales end Wednesday, August 18 at 5:00 pm. If you want to see the Duck Derby in action, you must sign up in advance, as the 1.5-mile hike to the race site must be guided by Mass Audubon staff.

And while we wait with eager anticipation for the launch of the race, here are some more fabulous ducks to feed your fowl fancy! 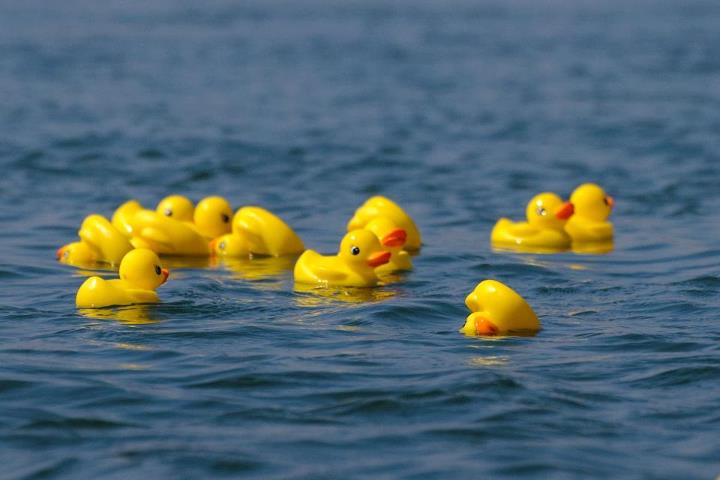 If you could have an all-expense paid dinner for two anywhere in the world, where would you go? That’s the question that the winner of Allens Pond Wildlife Sanctuary’s 9th annual Duck Derby will need to wrestle with in less than two weeks.

On August 17th at 6 p.m., approximately 5,500 numbered rubber ducks are expected to be released en masse on the incoming tide between Buzzards Bay and Allens Pond.

The first duck to float across the finish line will award it’s owner dinner for two, air travel, and two night’s accommodations anywhere in the world. Runner ups have a chance at as many as 49 other prizes. Even the last duck across the finish line—dubbed the “slacker quacker”—earns its owner a free entry to the 2013 Duck Derby and a chance to try again.

Want in on the action? All you have to do is “adopt” one or more little yellow rubber duckies to enter the race. One duck will cost you $10 (five for 40; 13 for $100 … you get the drift), with the funds supporting Mass Audubon’s work at Allens Pond in South Dartmouth.

Prize winners will be announced at the Duck Derby Festival, which takes place at Allens Pond on Saturday August 18 and features a “Ducky Dash 5K” at 8 am, followed by a “Kids Totally Quackers” Obstable Course at 9:15. From 10am-2 pm, participants can enjoy a variety of food, exhibits, games, live music, a plant auction, and a silent action.

Good luck! And may the luckiest duck win!