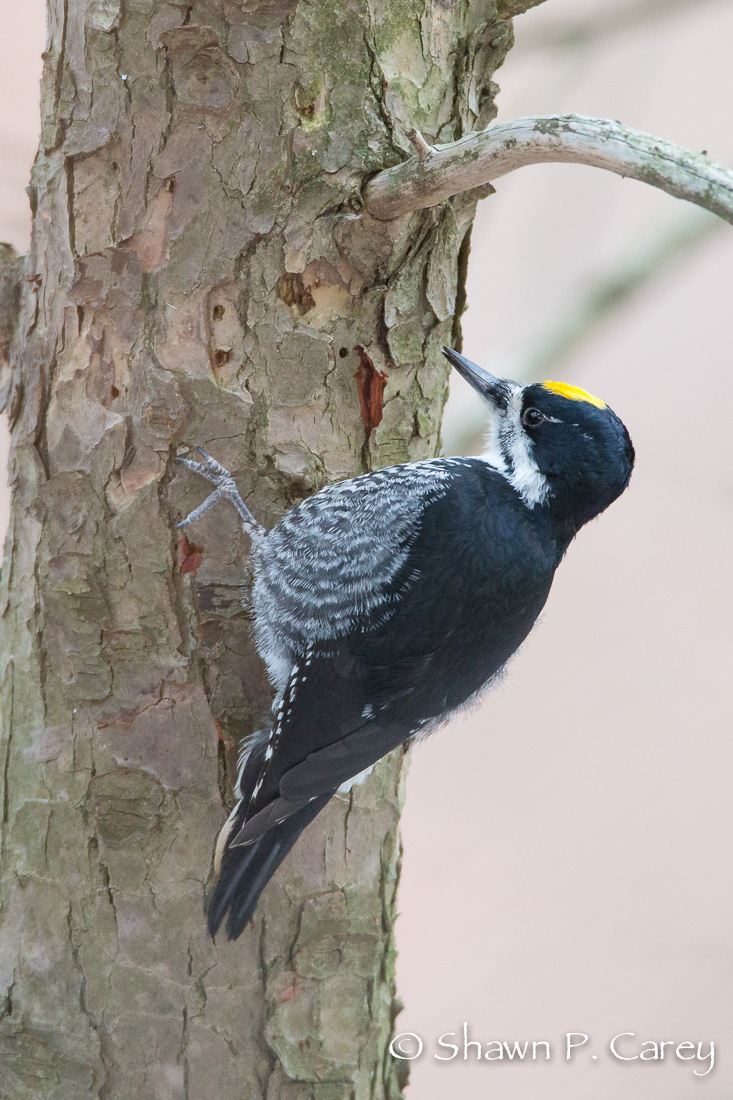 There’s a rare woodpecker that has been hanging around Forest Hills Cemetery in Jamaica Plain creating quite a buzz (or, shall we say, knock). The black-backed woodpecker, is a medium-sized (9.5”) woodpecker with an all black back, dark-barred sides on a whitish breast, and a bright yellow crown patch (males only) that is normally found in boreal spruce and fir forests from Newfoundland to Alaska.

While rare, it isn’t the first time this type of woodpecker has been spotted in Massachusetts. In fact, one reported sighting many years ago in 1956 was discovered by our very own Wayne Petersen, Mass Audubon’s Director of the Important Bird Areas (IBA) Program, back when he was only 12 years old.

When asked about the recent sighting, Petersen recalled this discovery, which he shared in the Fall/Winter 2013 issue of Sanctuary magazine.

“My personal affinity for woodpeckers enjoys a venerable genesis involving an elm tree. By the time I reached the seventh grade, I was already a dedicated birdwatcher, so during those seemingly interminable middle school days practically every spare moment was spent outdoors on the lookout for new birds to add to my list.

One October day a birding buddy and I noticed an unfamiliar woodpecker working on a grand old and dying American elm situated along a roadside in our local birding patch. Carefully noting the woodpecker’s markings, we were struck by the brilliant patch of yellow on its crown—a marking unique to only two North American woodpeckers.

Little did I realize at the time that the woodpecker and that old dying elm tree would ultimately give me my “15 minutes of fame.” A call to the Massachusetts Audubon Society eventually led to my name appearing in a Boston newspaper where Wayne Hanley, Mass Audubon’s editor of publications at the time, printed the news of my discovery in an article titled, “Nature Sends Rare Northern Bird Here.” In seventh grade this is as good as it gets!”

Do you have a great bird sighting story to share?

We’d love to read them in the comments!