Bees swarm. Locusts swarm. Butterflies, not so much. But at the moment, many thousands of painted lady butterflies are filling gardens and roadside stands of fall wildflowers at the end of a long flight from Southwestern deserts. 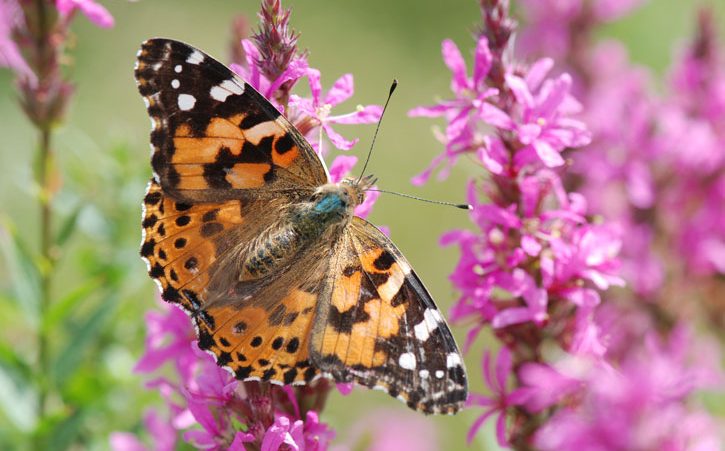 There are two species of very similar “Lady butterflies” that occur in Massachusetts. The American lady is a common resident species that flies throughout the warm seasons and overwinters in the pupal stage or as an adult butterfly. The life cycle of the painted lady is considerably more dramatic.

The butterflies involved in the present “irruption” presumably originated in the deserts of northern Mexico. Triggered by poorly understood conditions on the wintering grounds, Painted Ladies emerge in enormous numbers (think locusts) and disperse northward occasionally reaching as far as New England.

If, as sometimes happens, the irruption occurs in spring or summer the species can reproduce here, but cannot overwinter at this latitude. So unless there is another mass migration next year, you may see no painted ladies at all in Massachusetts next year.

A sense of the enormity and drama of the largest of the Lady irruptions is given in this 1869 account by S. B. J. Skertchl from the Sudanese desert: 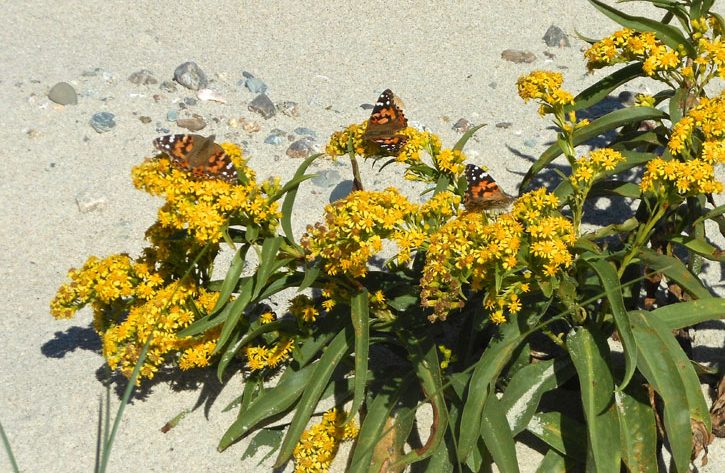 “Our caravan had started for the coast, leaving the mountains shrouded in heavy clouds, soon after daybreak. At the foot of the high country is a stretch of wiry grass, beyond which lies the rainless desert as far as the sea. From my camel I noticed that the whole mass of the grass seemed violently agitated, although there was no wind. On dismounting I found that the motion was caused by the contortions of pupae of V. cardui, which were so numerous that almost every blade of grass seemed to bear one…Presently the pupae began to burst and the red fluid that escaped sprinkled the ground like a rain of blood. Myriads of butterflies, limp and helpless, sprinkled the ground. Presently the sun shone forth and the insects began to dry their wings, and about half an hour after the birth of the first the whole swarm rose as a dense cloud and flew away eastwards towards the sea. I do not know how long the swarm was, but it was certainly more than a mile, and its breadth exceeded a quarter of a mile.”

Want to witness this butterfly irruption?

You may have to travel no farther than your garden. Like many butterflies, the painted lady isn’t especially picky about which flowers to nectar on. Or head for coastal areas where they tend to concentrate and seek out patches of late-blooming wildflowers such as goldenrods and asters.

For more information on this fascinating butterfly, check out Mass Audubon’s Butterfly Atlas, which includes data collected between 1986 and 1990.