Summer is a magical time for watching butterflies. A quick hike in the woods, a few quiet moments in a garden, or even a walk down a city block almost always turns up a few butterflies, more if you’re looking for them. Amidst this bounty of butterflies, here are five species likely to be flying whenever you venture outside: 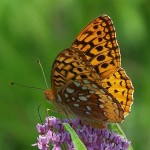 With its bright orange color, black markings above, and silver spots below, the Great Spangled Fritillary is easy to recognize and, unlike most butterflies, will sit still on a flower head. Fritillaries are the reason I let wild violets grow in my lawn and garden—in the spring, young caterpillars who have overwintered in the leaf litter, crawl to a nearby violet patch and begin munching. 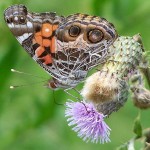 This must be the year of the American Lady butterfly; they’re everywhere! This lovely, medium-sized butterfly lays its eggs on Pearly Everlasting and pussytoes. When resting with its wings upright, it displays a splash of pink on its forewing and two large blue-centered eyespots on its hindwing (in contrast to the Painted Lady, which has four smaller spots on its hindwing). 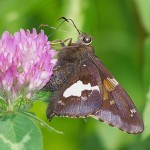 Skipper butterflies are like the LBJs (little brown jobs) of the bird world and can be maddeningly difficult to identify. That being said, of all the Skippers, one is easier to ID than the others: the large Silver-spotted Skipper. A wonderful introduction to the world of skippers, the silver spot on its hindwing flashes like a beacon as it nectars in gardens, meadows, and roadsides. 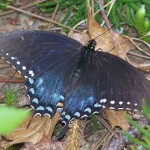 If you’re in a sun-dappled woodland and a large, black butterfly with iridescent blue clouding on the top of its hindwings flies by, it’s probably a Spicebush Swallowtail. Its distinctive caterpillars, with large fake “eyespots,” feed on spicebush and sassafrass. One of my happiest springtime memories is gently uncurling young sassafrass leaves to greet the new caterpillars. 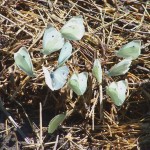 The Cabbage White may be an odd choice for this list. It’s a non-native butterfly, which feeds on invasive garlic mustard plant and the crucifers of our vegetable garden. But given a little time, the Cabbage White, which is often mistaken for a moth, can work its way into a butterfly lover’s heart. I can always count on it to make an appearance, even when no other butterflies are flying.

Want to learn more about butterflies and how to attract them? 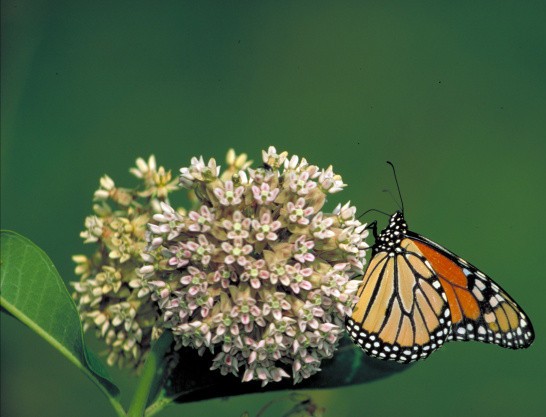 If a gardening catalog offered a plant that sported unique flowers, attracted butterflies, fed and protected the beloved monarch butterfly, provided nesting material for goldfinches and orioles, was easy to grow, and was native to our state, wouldn’t we be eager to plant some in our gardens?

So, what is this magical plant? Milkweed! There are over 70 species of milkweed native to the United States. In Massachusetts, species you may see include: common milkweed, swamp milkweed, butterflyweed, whorled milkweed, and poke milkweed. Each looks different and each blooms at different times depending on the species and location.

Common milkweed is probably our most recognizable milkweed. Found in fields, meadows, disturbed areas, and roadsides, its large, thick leaves exude a milky substance when broken; its pink blossoms attract a frenzy of insect activity in early summer; and its distinctive seed pods release a hundred or more seeds flying on silky parachutes in late summer and early fall.

But don’t let the “weed” part fool you. This plant is a treasure not to be plucked. Here are a few reasons why:

So, please, don’t weed the milkweed! Instead plant it, grow it, nurture it, and acquaint yourself with a patch near you.

To learn more about milkweed, visit a Mass Audubon wildlife sanctuary near you or come to the Annual Barbara J. Walker Butterfly Festival at Broad Meadow Brook in August to purchase milkweed, plant milkweed seeds, and learn more about butterfly gardening.

Photo of a monarch on common milkweed via U.S. Fish and Wildlife Service