I never fail to see something spectacular on my walks at Wellfleet Bay.

I have a ritual as I get ready. I turn off all the noise in my head and leave it in the car. On most walks I travel alone and early in the morning. I use all of my senses. You would be amazed at what you can run into.

In the coolness of a summer morning, I always see young rabbits. Or a deer standing by the solar panel munching on the grass. 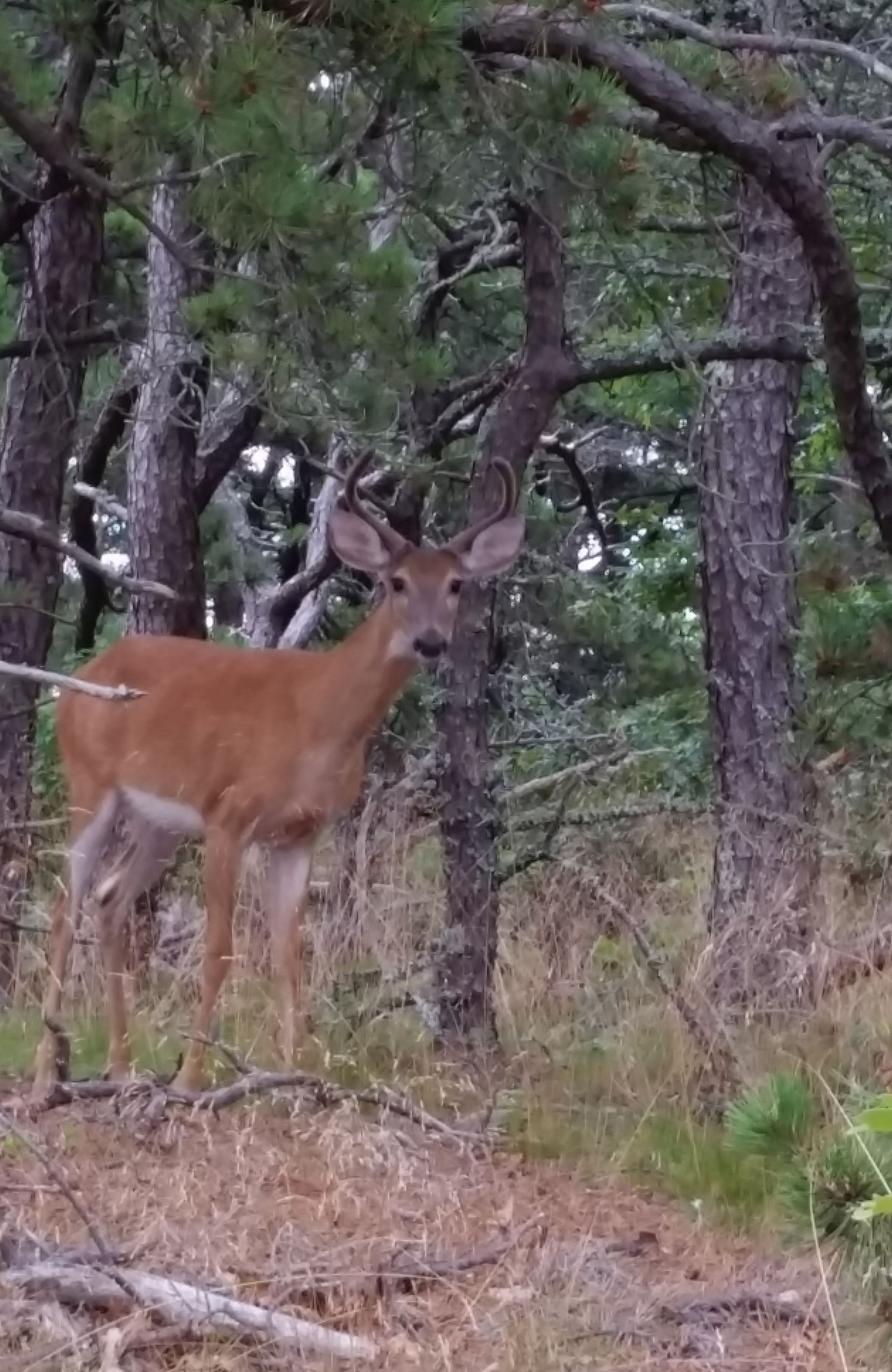 This white-tailed buck stomped his hooves a few times at his observer, a sign the deer wants the observer to move along or to alert other deer to potential danger. (photo by Mary Lou Heintz).

Very early one morning a fisher in the middle of the trail growled and took off. When I notice a shadow on the trail, my eyes shift to the sky to look for a passing bird. Sometimes it’s an osprey, hawk, or just a crow. 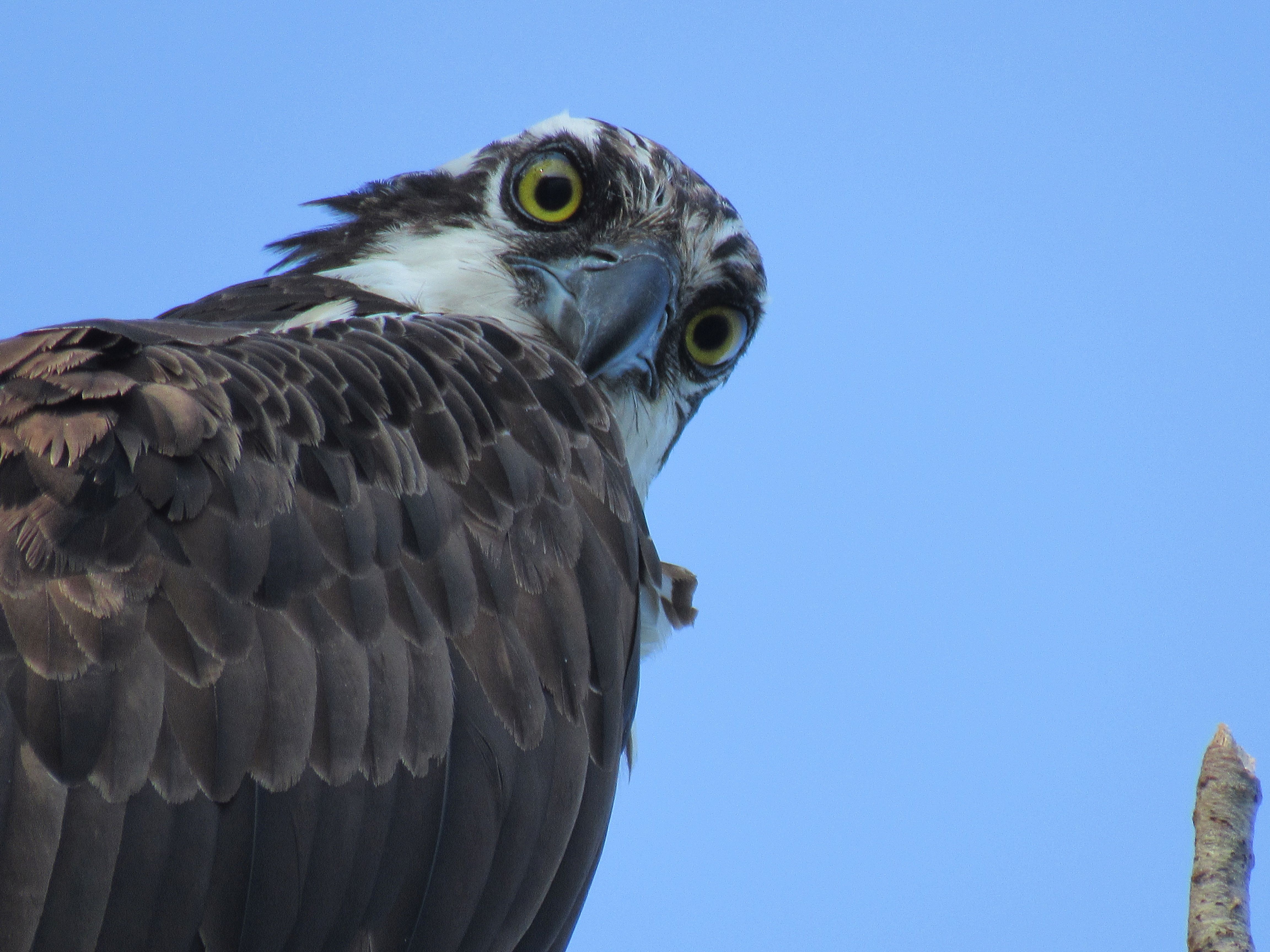 You lookin’ at me? An Osprey glances at photographer from atop a tree along the Silver Spring trail (photo by Mary Lou Heintz).

I also see mice, moles, and chipmunks. Once, I came upon a mother raccoon watching me closely as her babies climbed up and down the tree with no notice of me. 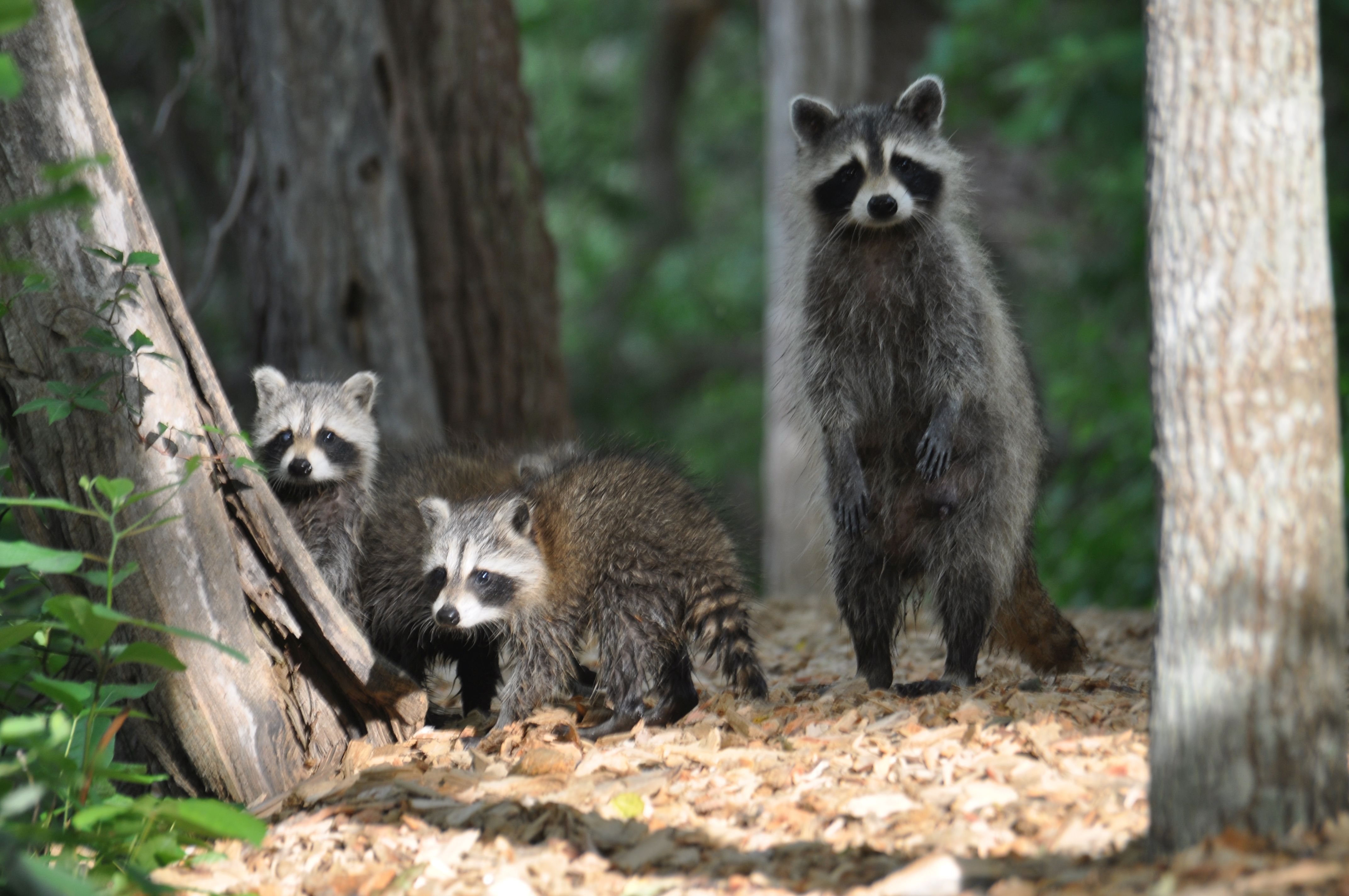 Wildlife is far more cooperative about photos when there’s only one photographer! (photo by Mary Lou Heintz).

On Silver Spring, careful listening has rewarded me with nice sightings. The sound of softly crunching leaves alerted me to a box turtle on the move. Another rustling sound–this time more steady and continuous– helped me find a ribbon snake on its way to a branch near the water. 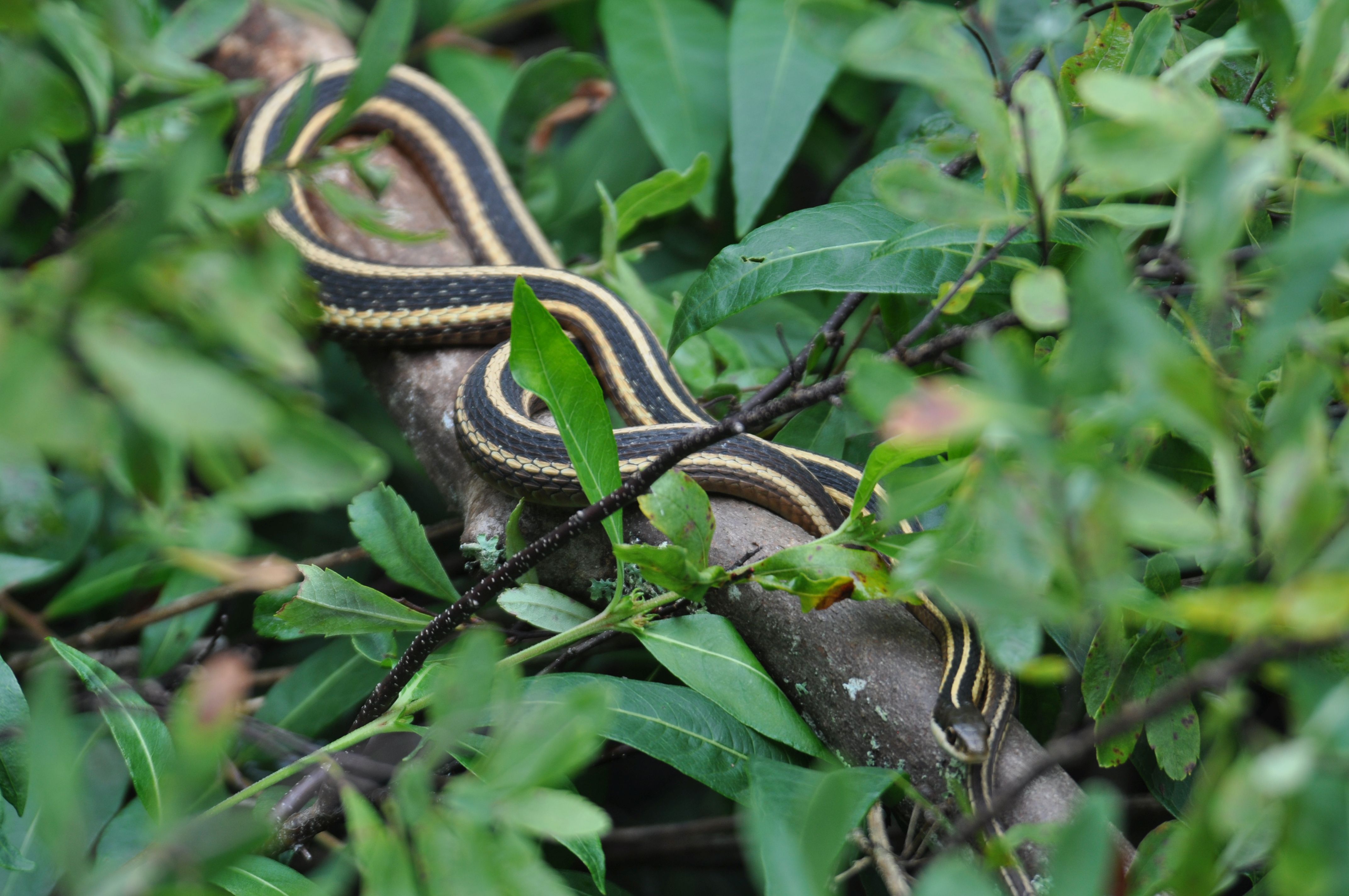 This summer the otters have entertained me. The back bridge at Silver Spring this time of year is good viewing for them. Look for circles on the water’s surface to spot them before they come up. In late summer, there’s always an assortment of butterflies, dragonflies, and pollinators that use the sweet pepperbush and water willow plants. I also regularly see painted turtles, green frogs, bullfrogs, and tadpoles in various stages of development! 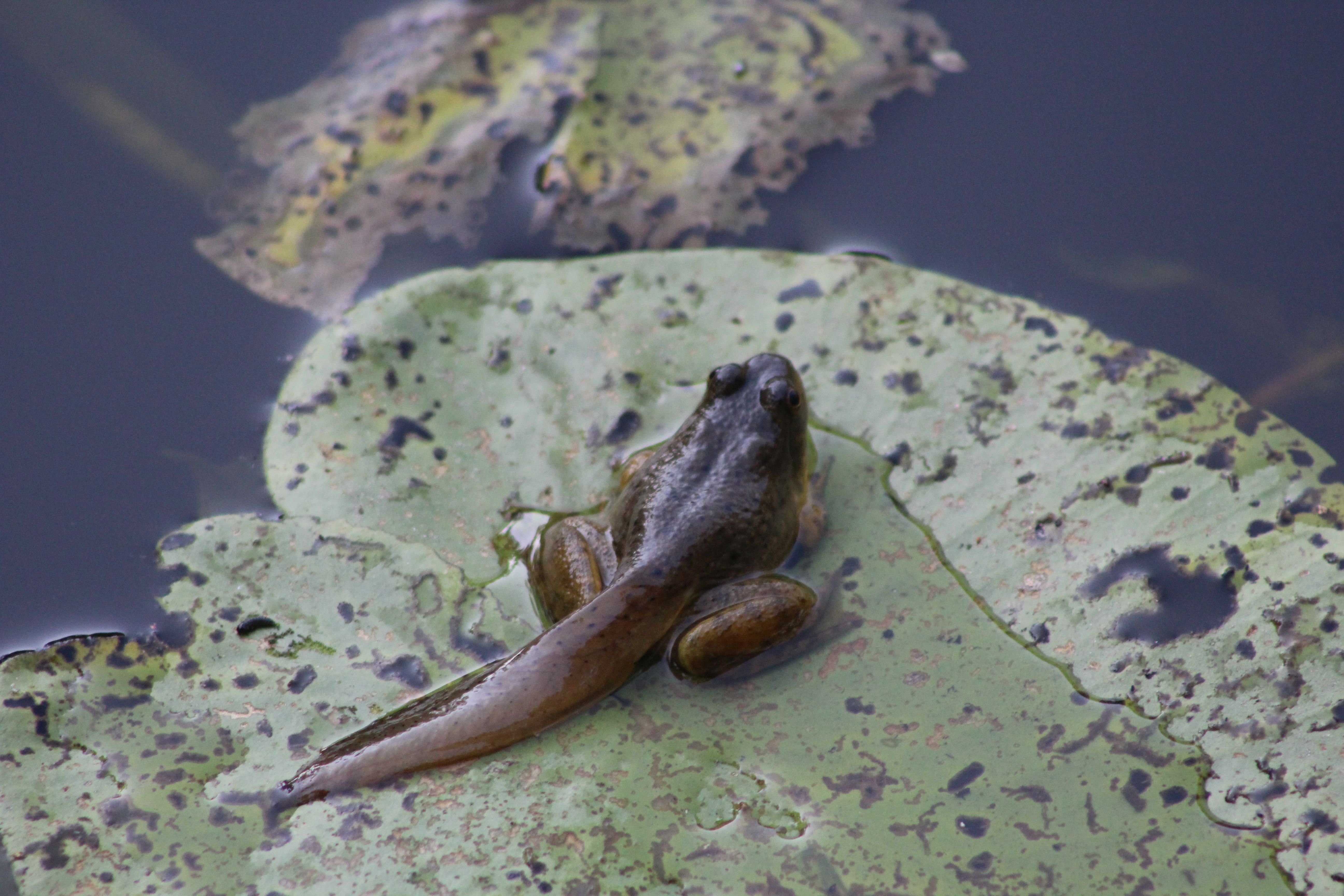 This frog-in-the-making has a frog body except for a tadpole tail (photo by Nicole Gallup).

Past the bridge, up the hill into the pines, you will see smaller paths leading off into the woods. They are trails and paths that wildlife uses to take a short cut to spots for feeding and sleeping for the night.

Listening intently, you can hear the drumming of the woodpeckers—the red-bellied, downys, and flickers. When you listen to a mob of crows or blue jays you can be assured they have zeroed in on a hawk of some kind or even the great horned owls that live on the sanctuary. 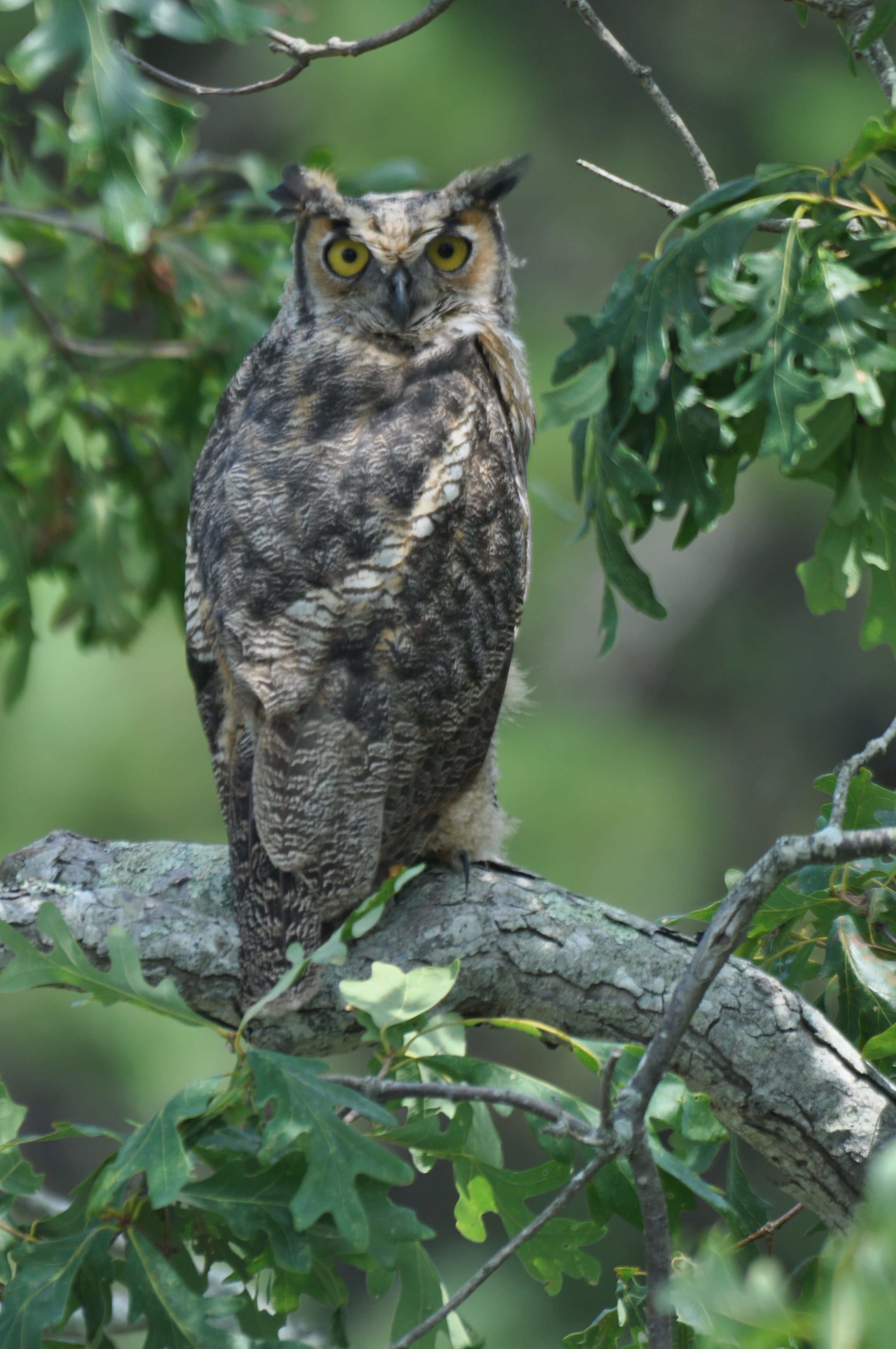 This young Great Horned Owl was born on the sanctuary earlier this year (photo by Mary Lou Heintz).

Always looking for the open spaces in the trees, I have been rewarded with a green heron or two on a snag. Sometimes, the big snapping turtle will take a small break on the mud flats.

Once I reach the end of the trail, I start deciding which trail to take next. 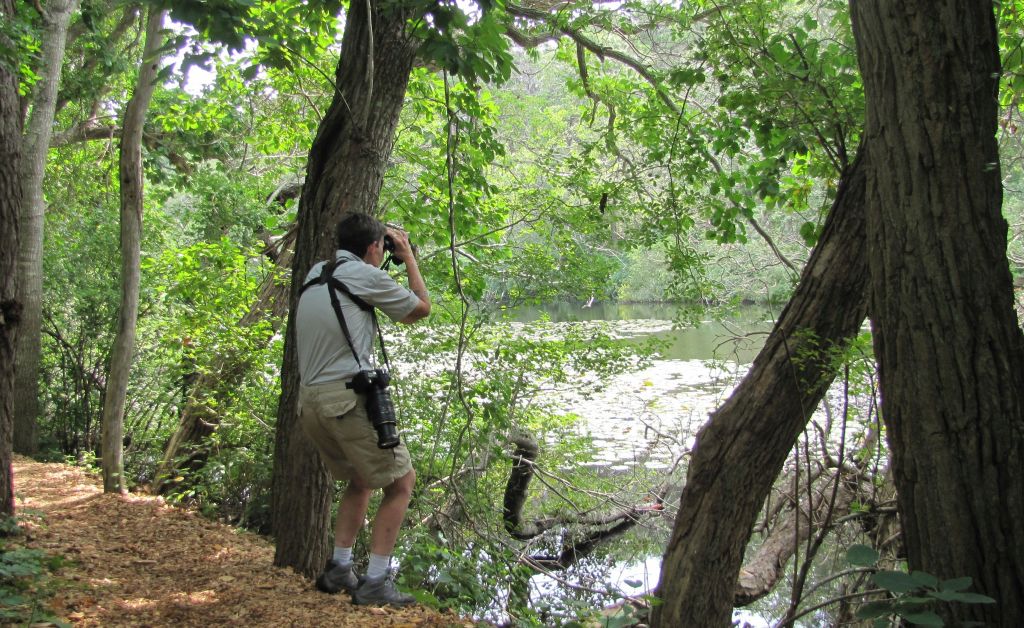 This post was contributed by Mary Lou Heintz, a Wellfleet Bay volunteer who, when she’s not walking the trails, works at the front desk at the Nature Center, assists at the bird banding station, and rescues sea turtles.