Since most of the sanctuary’s box turtles emerged back in May we have been at work monitoring as many of them as possible.

As of mid-August we have identified and marked six “new” turtles. Time will tell whether or not these are residents or transients. Some are simply passing through, which is welcome as it has the potential to add some diversity to our gene pool. 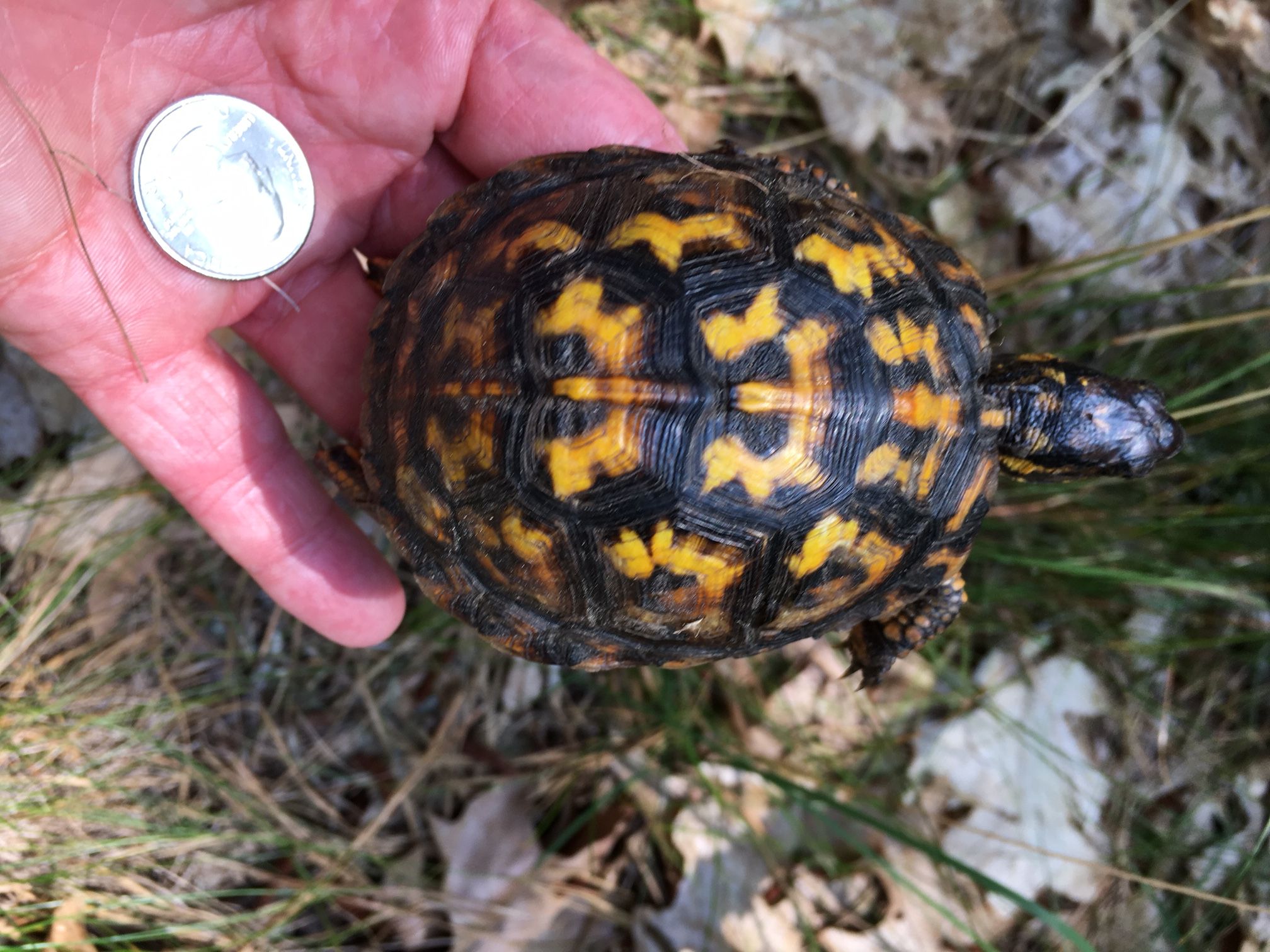 You don’t see a box turtle this size very often. It’s estimated to be around 5 years old. (photo by Tim O’Brien).

Two of our new turtles are young females, one a 5 year old and the other 9 years old. We have also noted a yearling hatchling—- a turtle that likely hatched last fall. We rarely see these very young ones because they are still very vulnerable and are likely to remain hidden.

But having them on the sanctuary property suggests that we have a healthy replicating population. 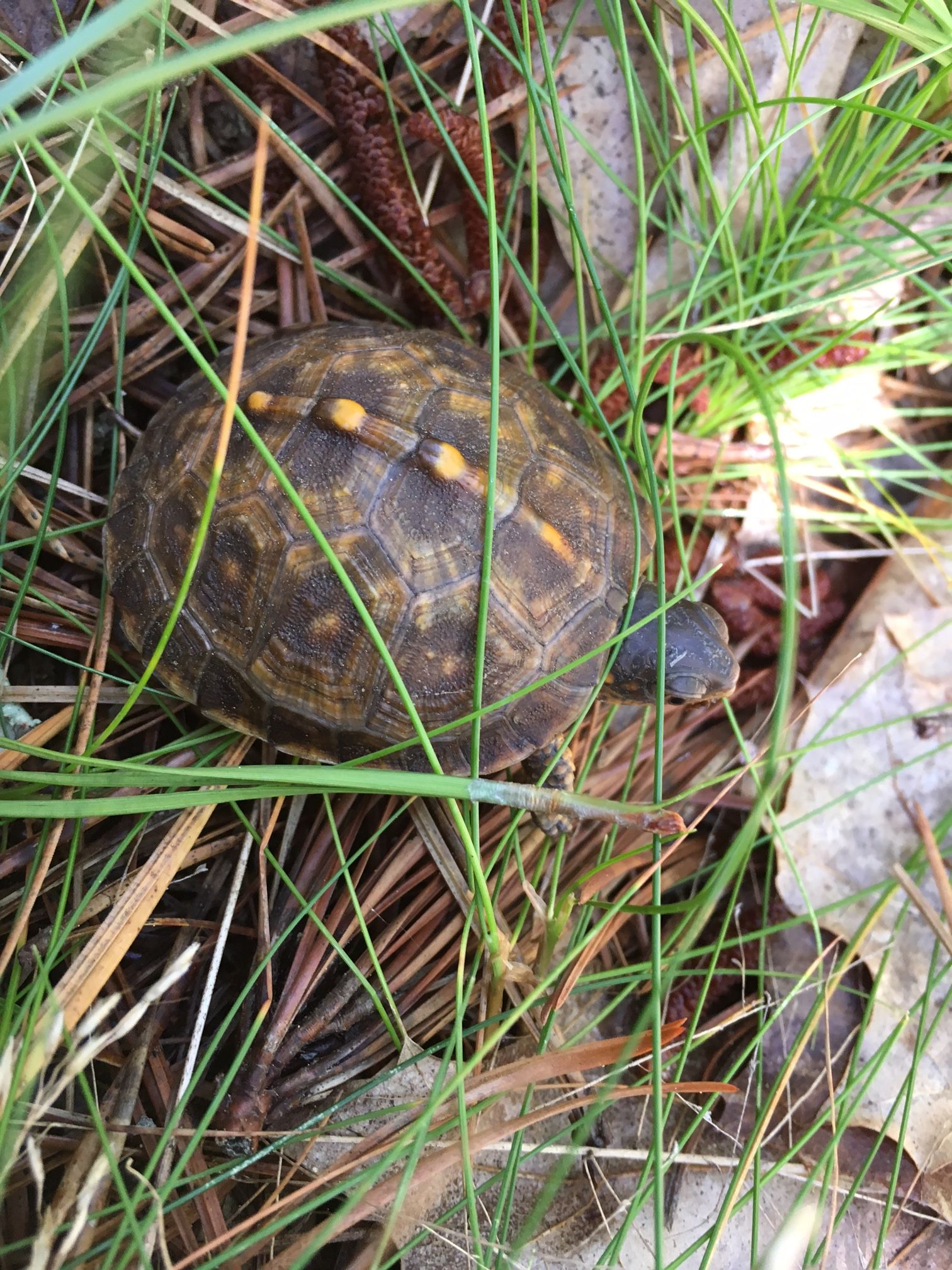 This little turtle made it through its first winter! (photo by Tim O’Brien).

Four turtles have radio transmitters that allow for close monitoring. A newly tagged female turtle had us all a bit surprised when after being fitted with a transmitter she immediately retreated into the salt marsh! Not just on the edge of the marsh, she went into the marsh and stayed submerged in salt water. We did confirm she’s alive. But her behavior is mystifying! 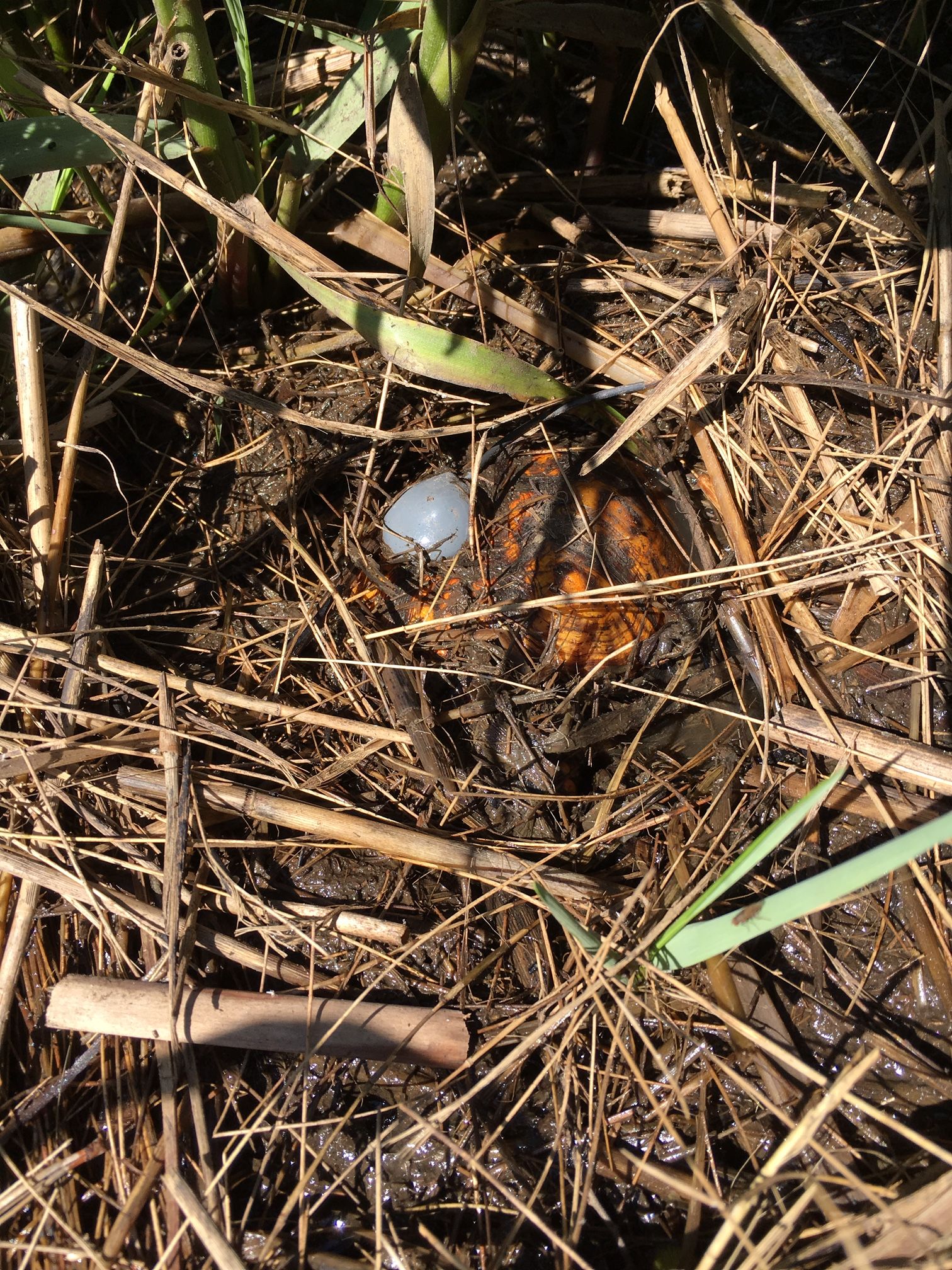 Dead? Alive? Chilling? We have no idea why this land turtle buried herself in the salt marsh. Just recently a second female also settled in the marsh. Now we’re really determined to get some answers! (photo by Tim O’Brien)

Box turtles are no strangers to salt water (some members of an old Long Island population sometimes turn up in Long Island Sound) but we have not observed such behavior here at the sanctuary. Why did she choose the salt marsh? Maybe it was just a way to beat the heat or hide from a predator. Perhaps it offered a source of food. We’ll be very interested in tracking the rest of her movements this summer and fall.

We conclude with some happy news. Our friends at Tufts’ Cummings School of Veterinary Medicine came to the rescue of a turtle with a large leg abscess that prevented her from completely closing her shell. 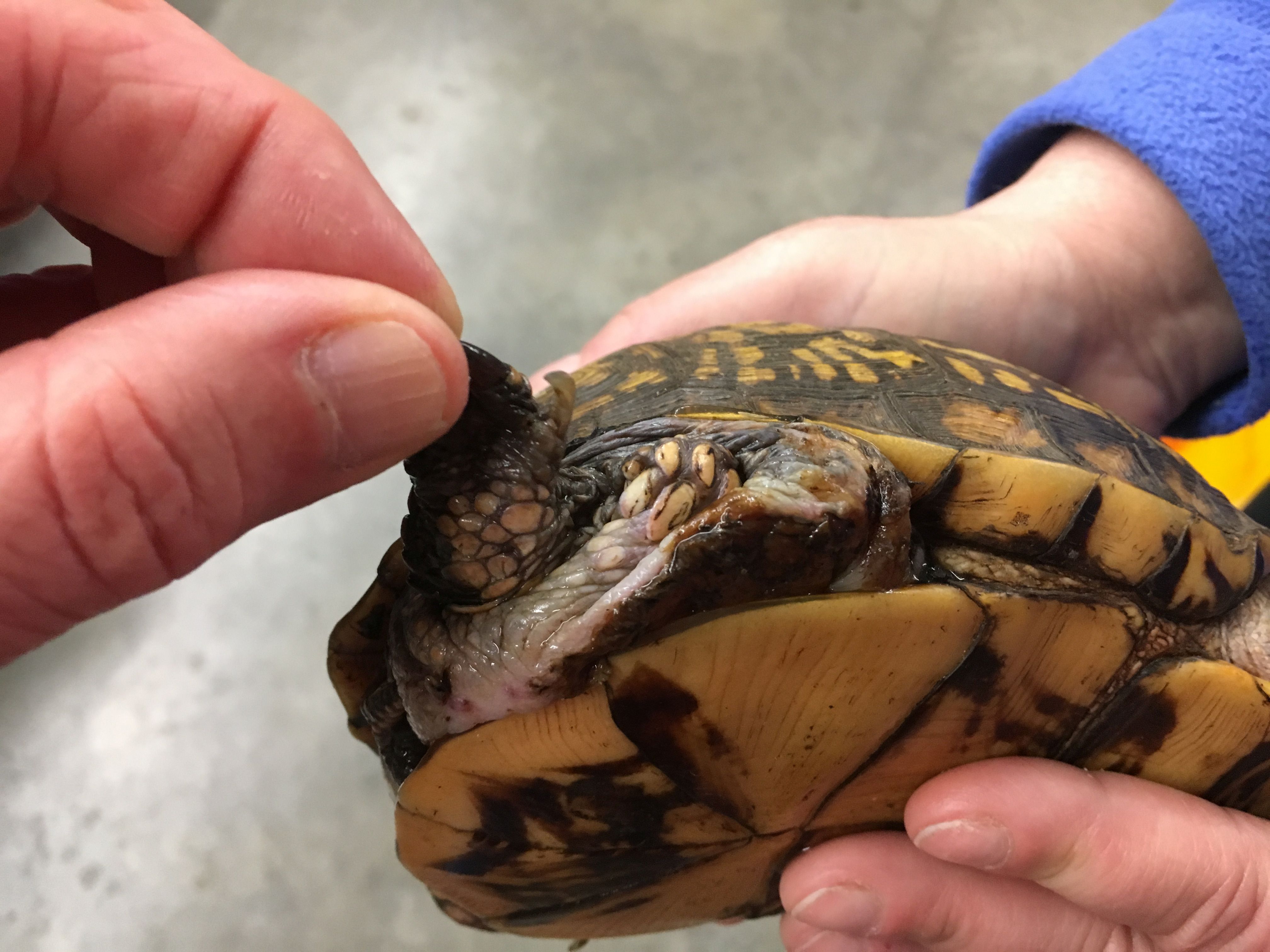 The abscess below the rear leg prevented this turtle from being able to pull the leg in, making her vulnerable to predators. (photo by Tim O’Brien).

Because this abscess made it impossible for the turtle to retreat fully into her shell, it put her at significant risk of predation. So we decided to intervene. The Tufts vets were able to surgically remove the layers of necrotic tissue and cure her of any infection. She now pulls her leg in and out with ease.

A month after returning this turtle to her Wellfleet Bay home, we were pleasantly surprised to discover she had a suitor! 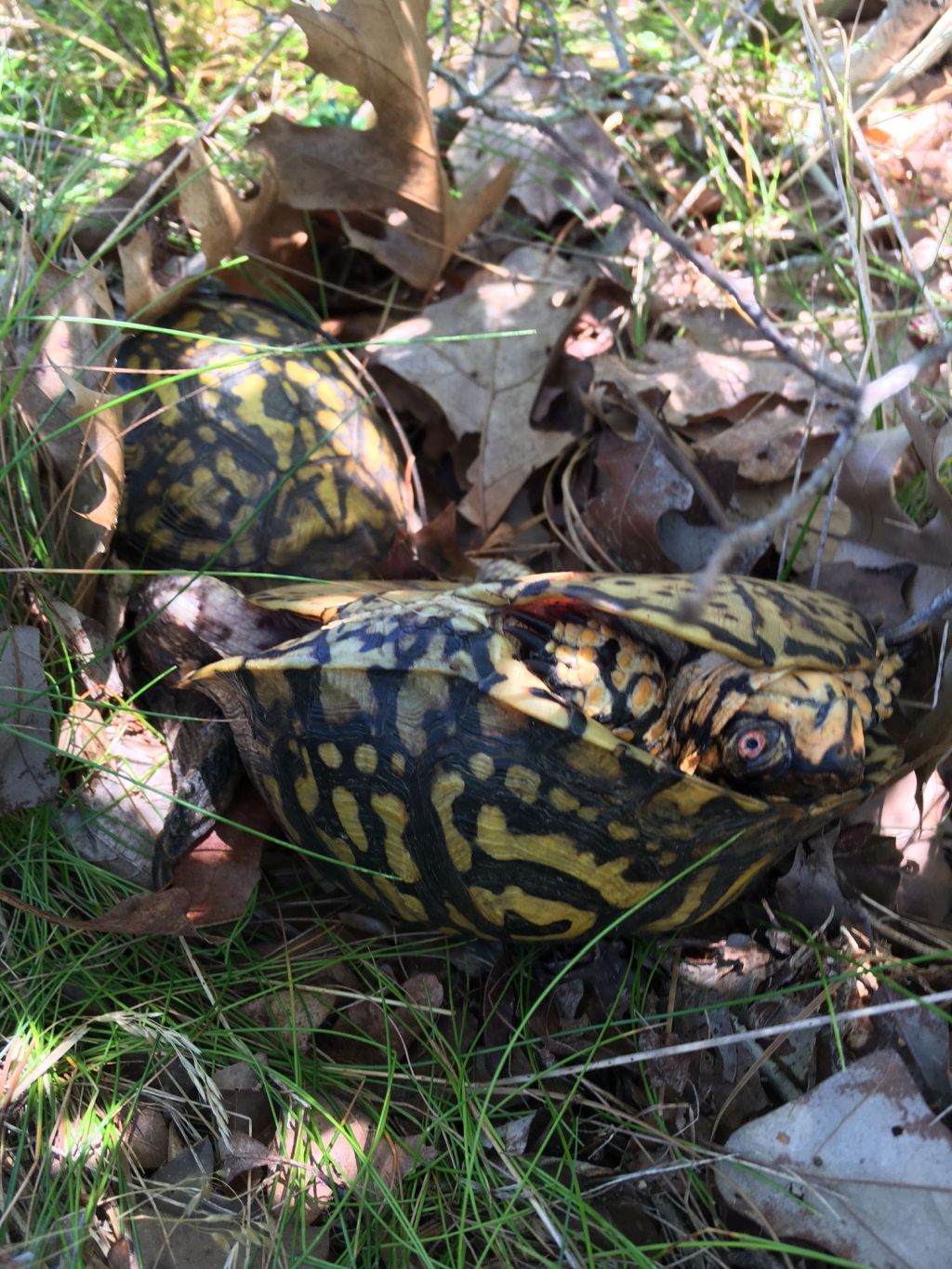 That upside down turtle in the foreground is the male. Male box turtles often tip over backwards during the mating process. Most of the time they can right themselves. (photo by Tim O’Brien).

Thanks to the female’s rear leg repair, this turtle can now comfortably dig a nest next spring and, we hope, send more box turtles out into the world. A big thank you to Tufts for another fine job!

Just because summer is ending, doesn’t mean our box turtle research does. In fact, we’re gearing up for our second study of brumation (reptilian hibernation) this winter. One question we hope to answer is whether there’s a link between the temperature of the underground soil and when the turtles emerge from their burrows in the spring. It will interesting to find out! 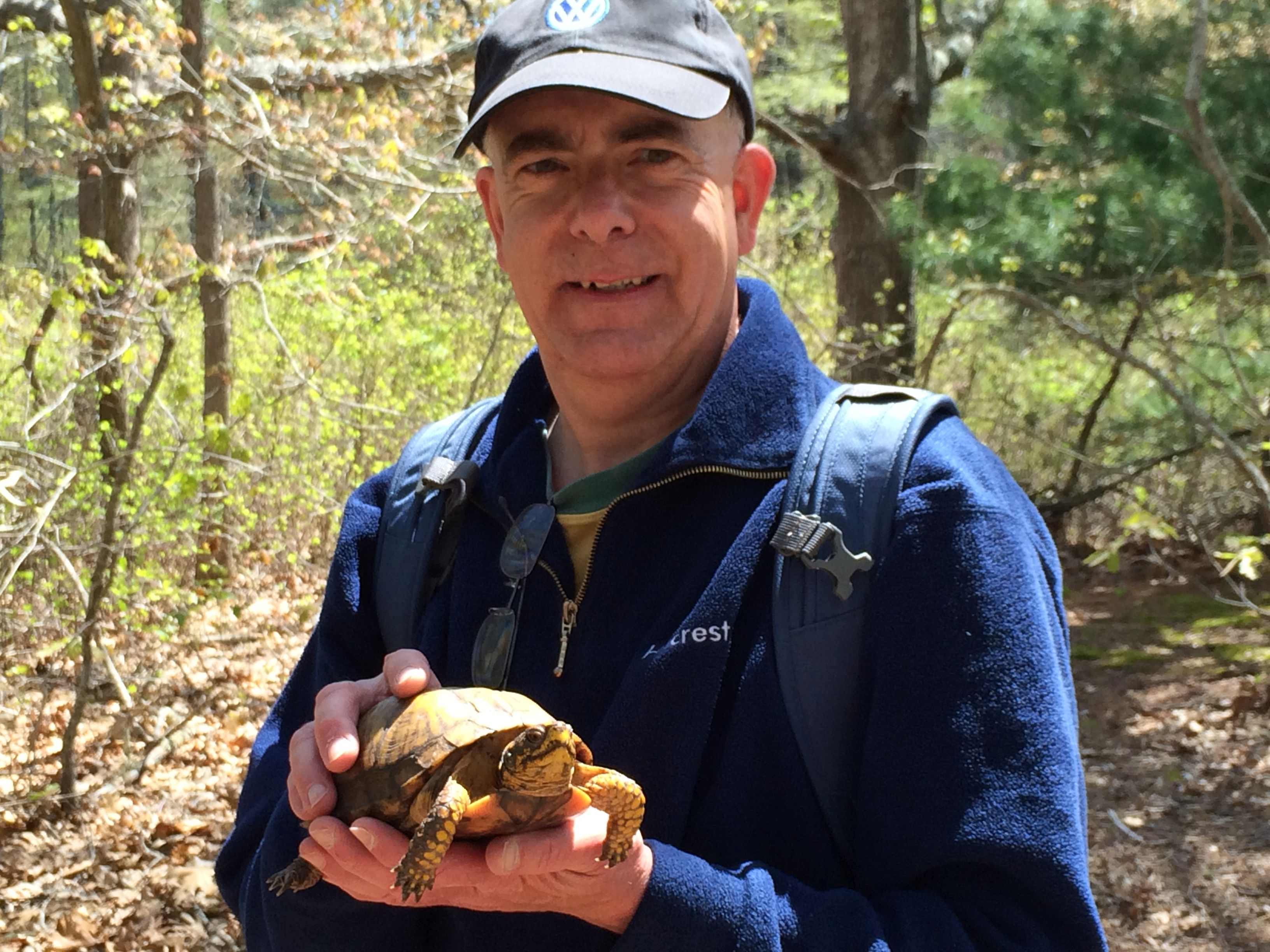 Tim O’Brien with “Queen Victoria”, one of the sanctuary’s oldest box turtles. (photo by Kim Novino).

This blog post was contributed by volunteer Tim O’Brien, who studies box turtles at the sanctuary. Even though they live off-Cape, he and his wife Kim Novino walk Cape Cod beaches regularly for cold-stunned sea turtles in the fall.