It’s only July, but for the small coastal waterbirds we monitor (and others) it is fast becoming fall.

Every day more adult shorebirds are flocking up in preparation to fly south. Their chicks will either go with them, or, as most do, head south on their own timetable. 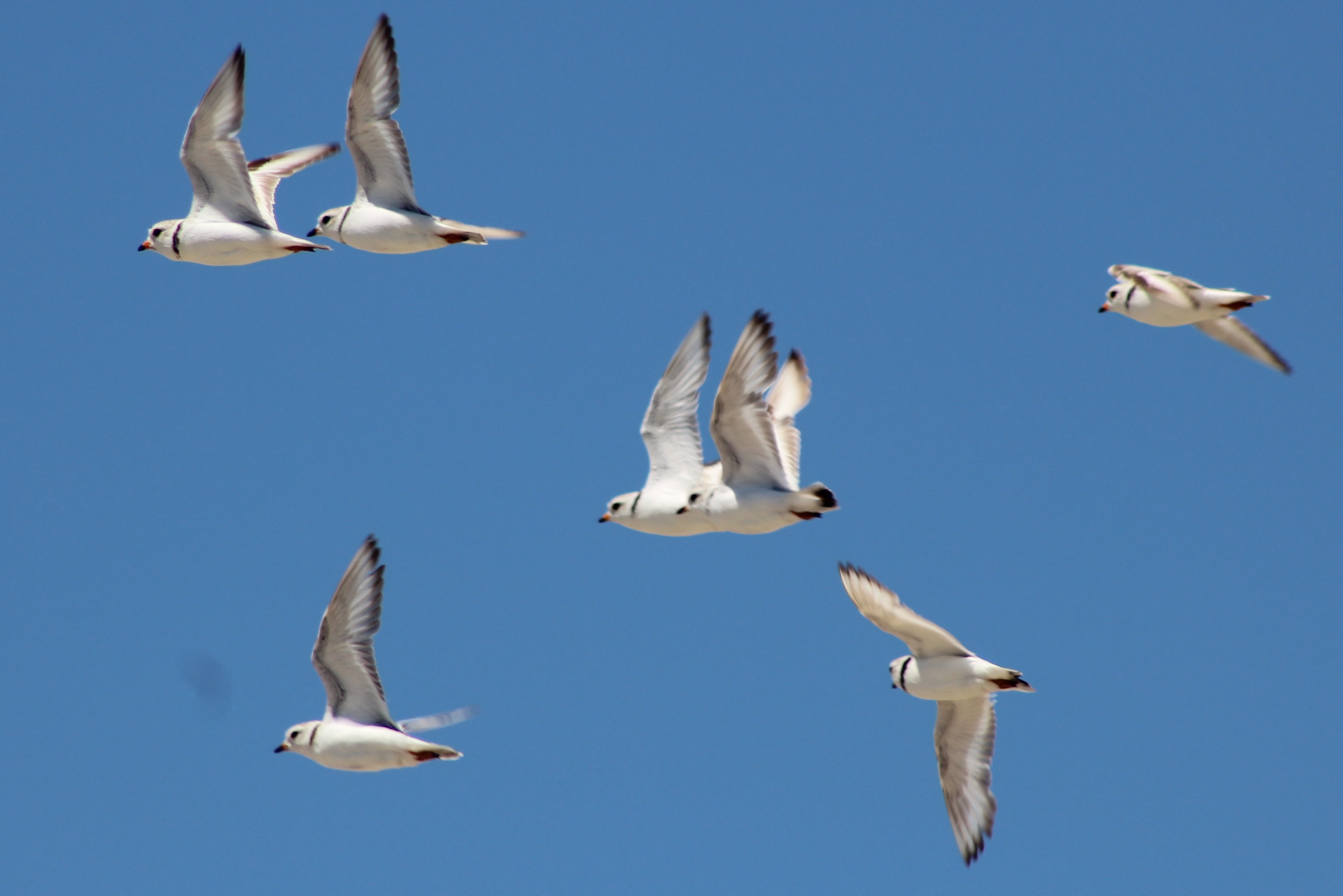 Group of adult plovers staging in Truro in preparation for their flight south for the winter (photo by Nicole Gallup).

Since I reported on the start of our Piping Plover and Least Tern nesting season, I wanted to let you know how it all turned out.

Out of the fifteen beaches we cover, we had three beaches with two pairs of plovers, three beaches with one pair, and one beach with one bachelor plover (more on him later). We had a total of seven pairs, giving us the chance to have as many as twenty-eight chicks by the end of the season.

Unfortunately of those seven pairs, only three nested successfully. And of the three successful pairs, none hatched a complete clutch (all four eggs). On the bright side, we  (and, of course, the birds) successfully fledged all eight of the chicks that did hatch!

As lead field technician, I spent a lot of time watching and worrying about these little birds. So, I must confess–as an animal lover–I found myself assigning them names. It helped to tell them apart. All the names were somewhat unisex since it’s not possible to distinguish the sex of each chick. 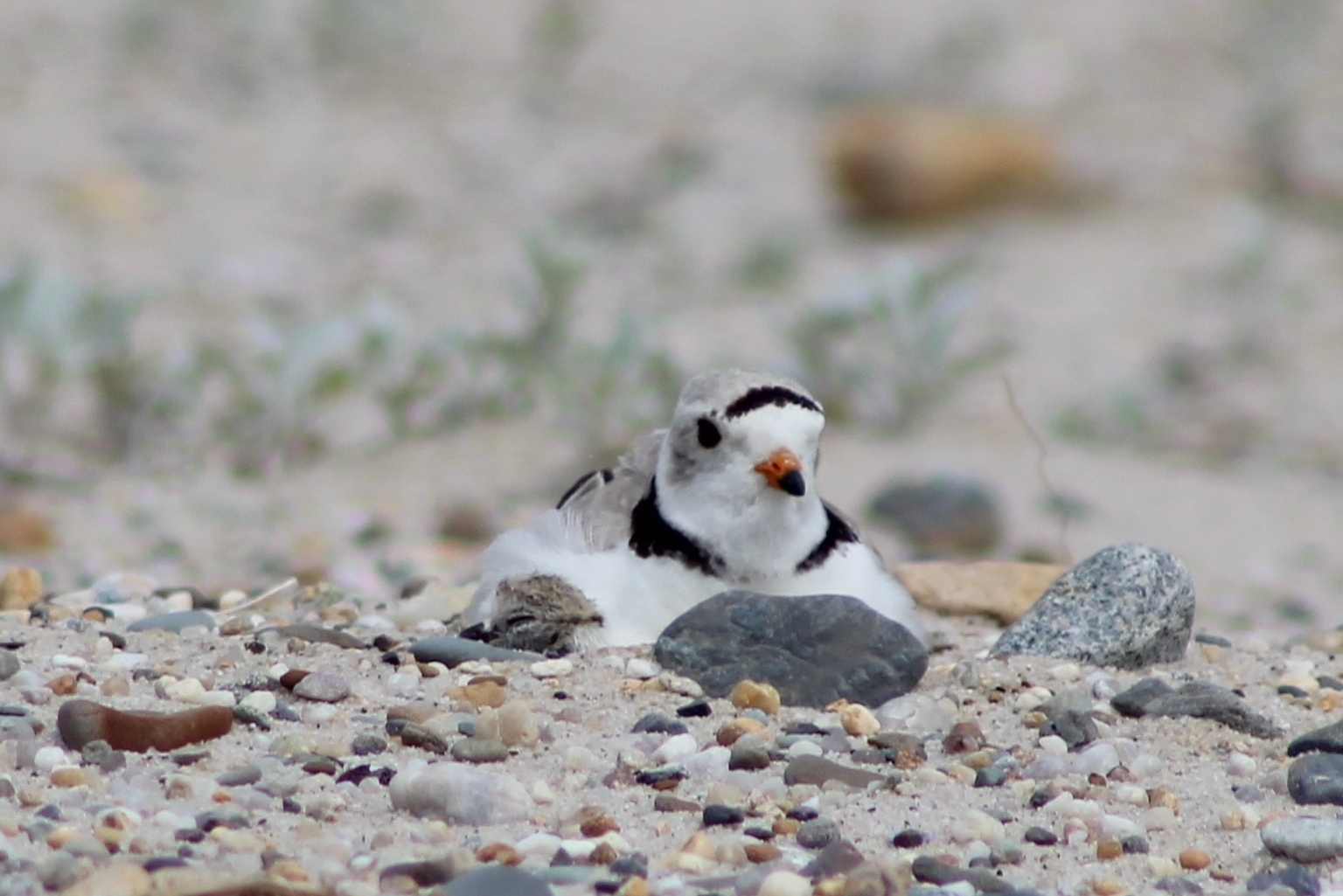 Adult incubating nest with the first of two newly hatched chicks in the nest bowl. (photo by Nicole Gallup)

In Truro, where we had a total of five chicks, the oldest were at Corn Hill Beach—Ryan and Riley, as I called them.  Ryan was the first chick hatched this season and was definitely the go-getter of the pair. He was often seen on his own foraging and running up and down the beach. Riley, on the other hand, was very much a daddy’s boy (or girl). He/she was a lot smaller than Ryan and there was something odd about its neck, as though some feathers were missing. Not surprisingly, Ryan was the first of our chicks to fledge and leave his natal beach. Riley was slower to achieve his first flights and spent most of his days eating. 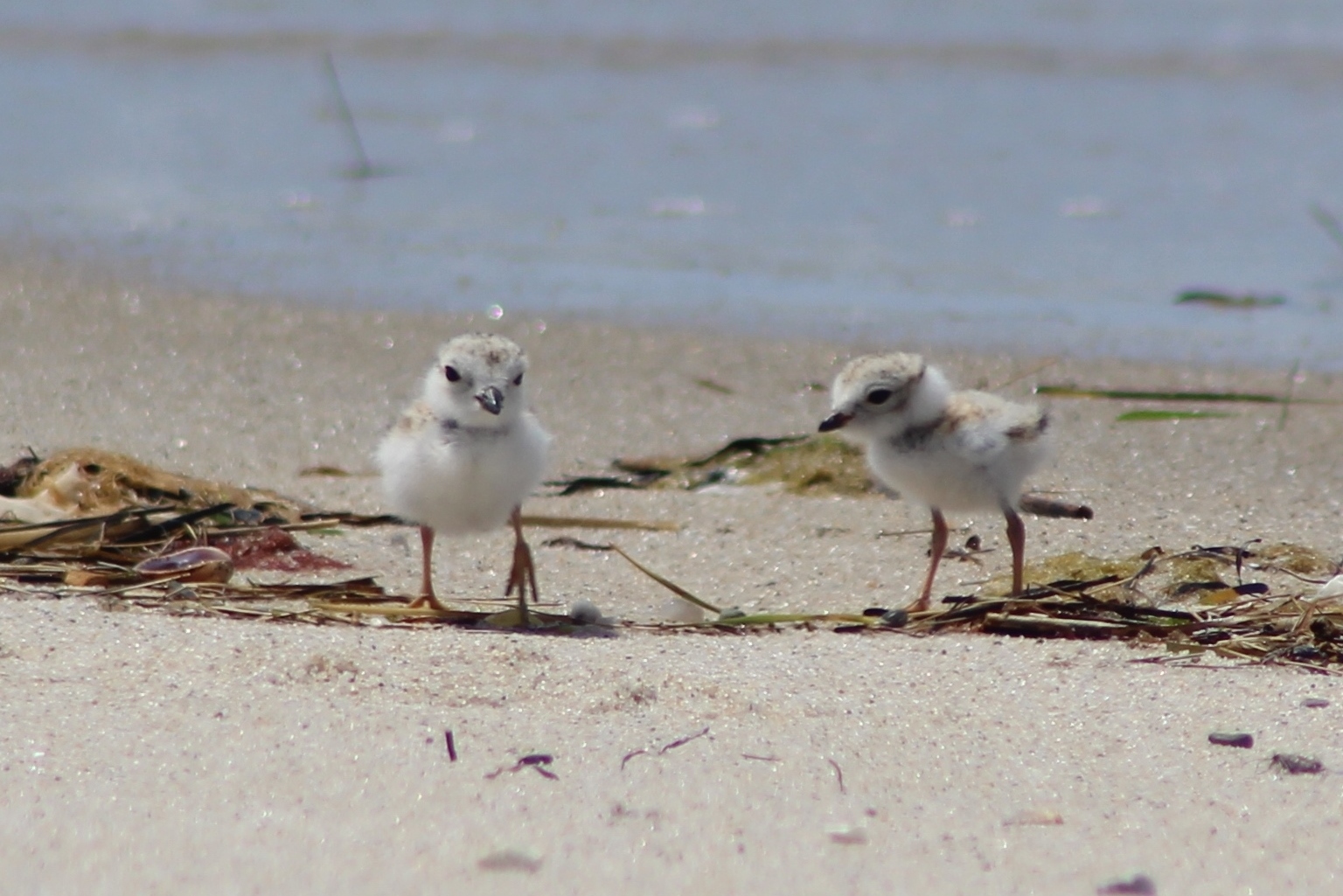 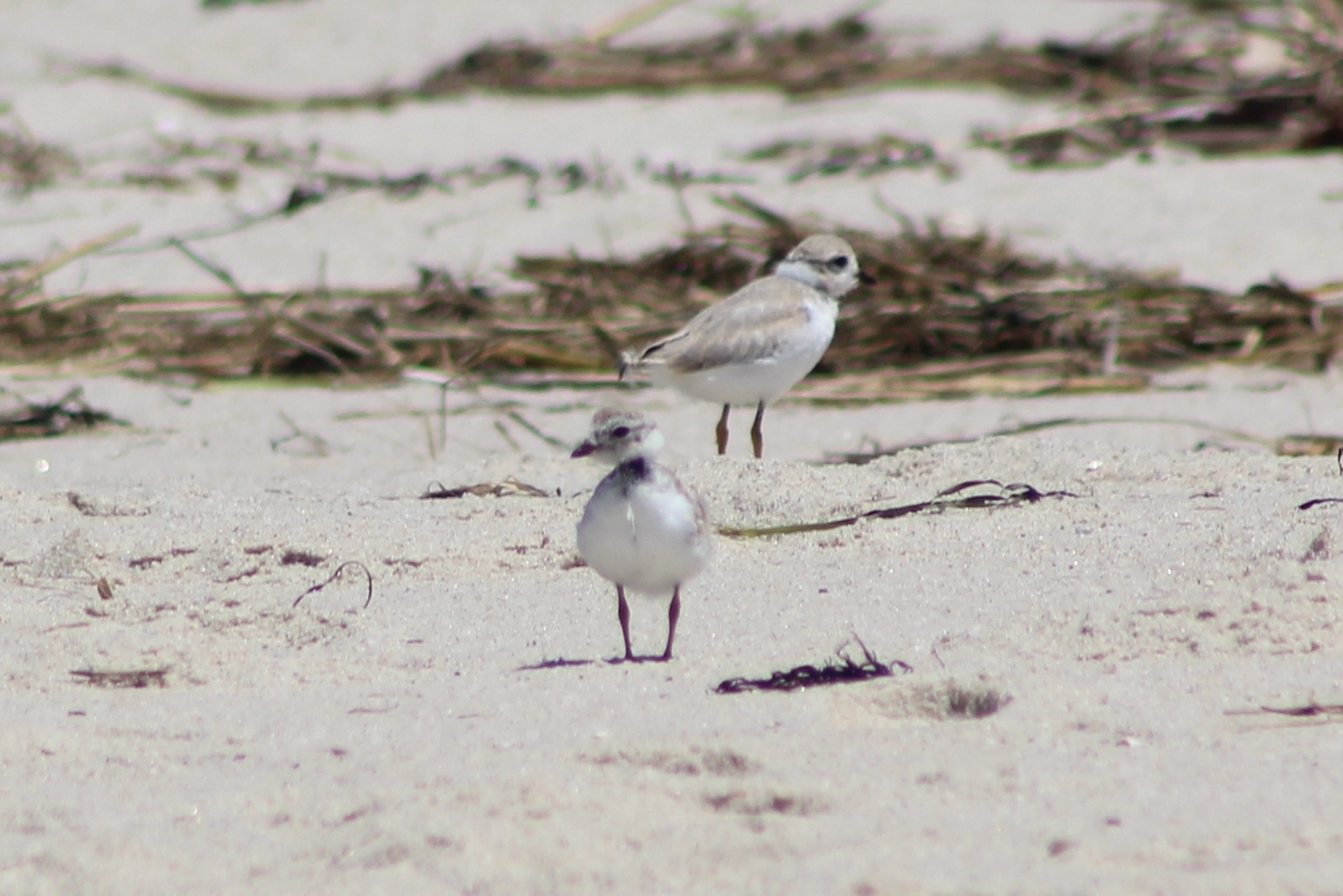 Riley (front) with the weird neck feathers, and Ryan (back) at 25 days old (photo by Nicole Gallup)

Our second oldest plover family was just across the Pamet River at Fisher Beach. I named them Alex, Blair, and Casey. Again, there appeared to be a rebel in this group of chicks. Alex was often out on his own, while Blair and Casey stuck together. All three chicks were a little slow to take to the air and instead would run away quickly to avoid people or animals.  Their disinclination to fly gave us a chance to observe the parents display an interesting behavior: they would charge after the chicks until they flew. Then it seemed to become a game. The three chicks would often chase each other and if one flew a bit, the next would try to make it just as far. 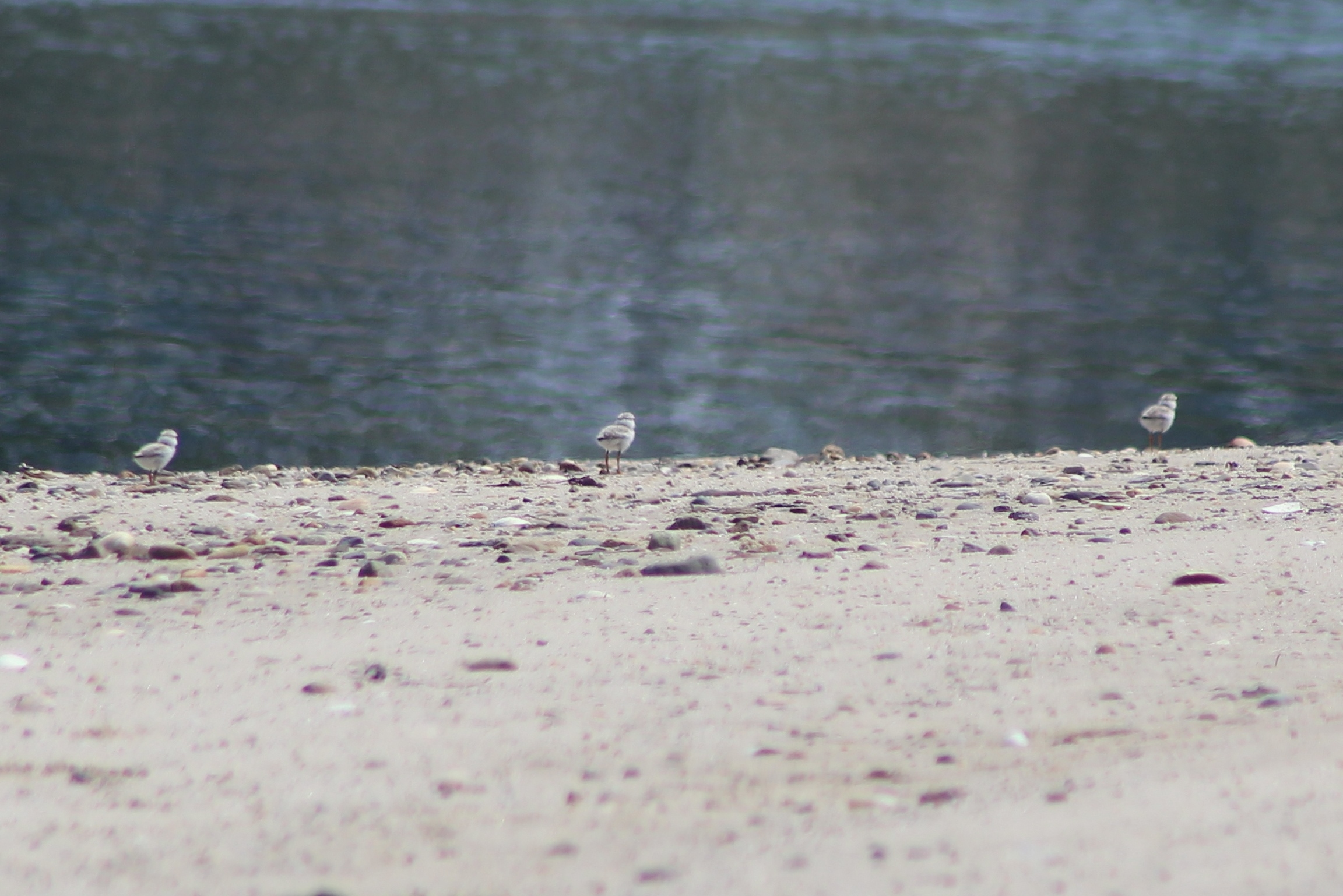 Casey (left), Blair (middle), and Alex (right) at 11 days old, scurrying away from me! (photo by Nicole Gallup) 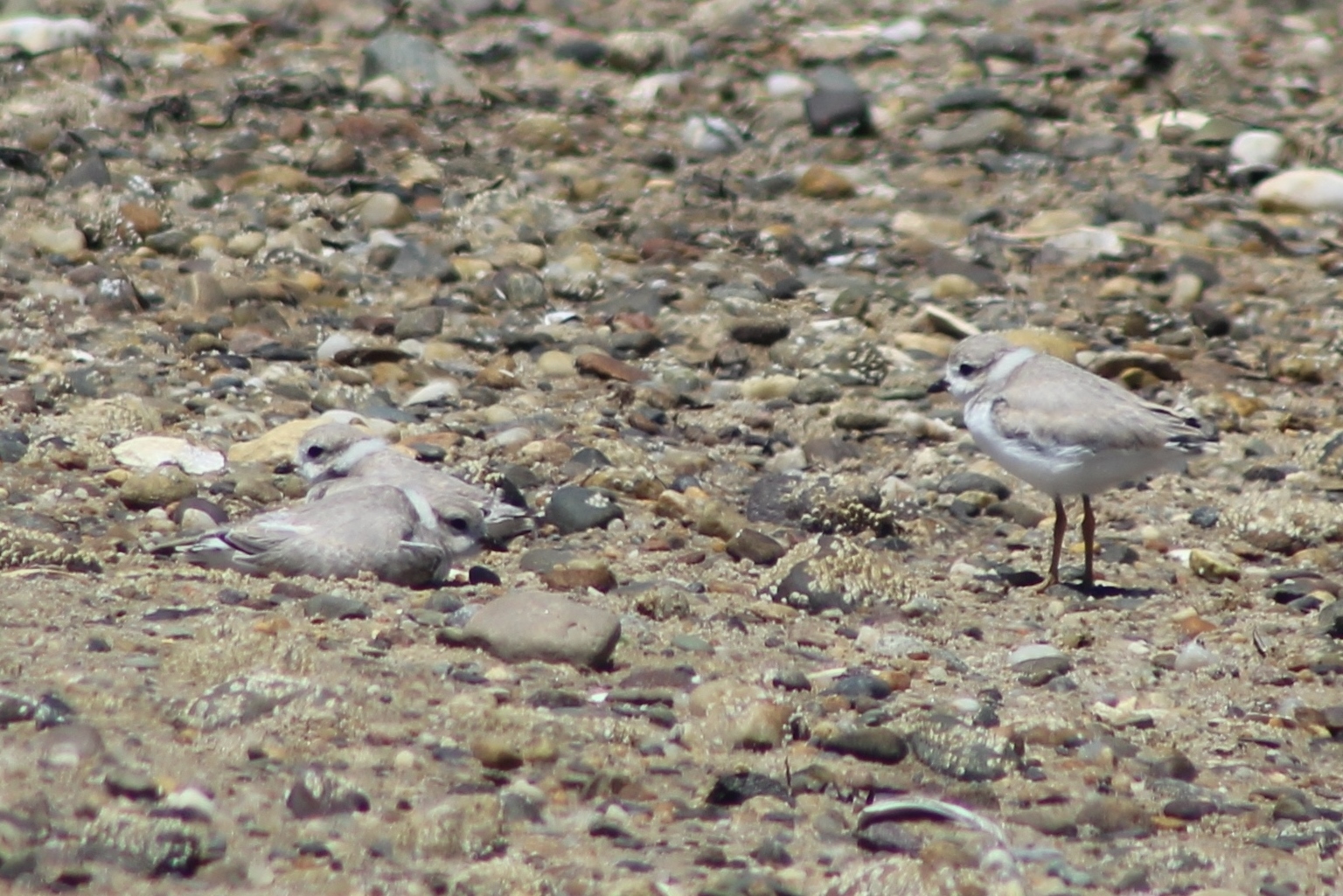 Our fastest developing chicks were at Brewster’s Crosby Beach– Nicky, Skyler, and Tristan. And once again I found a rogue among the group–Nicky. Because adult female plovers often leave their broods well before the chicks fledge, the males become single parents. So this poor dad had the job of overseeing Nicky, who would run the complete opposite direction from where Skyler and Tristan would hang out.  Nevertheless, the chicks paid close attention to the old man. Once he began alerting them to danger the chicks, without hesitation, were gone in a flash — up into the dune grass and safely hidden. 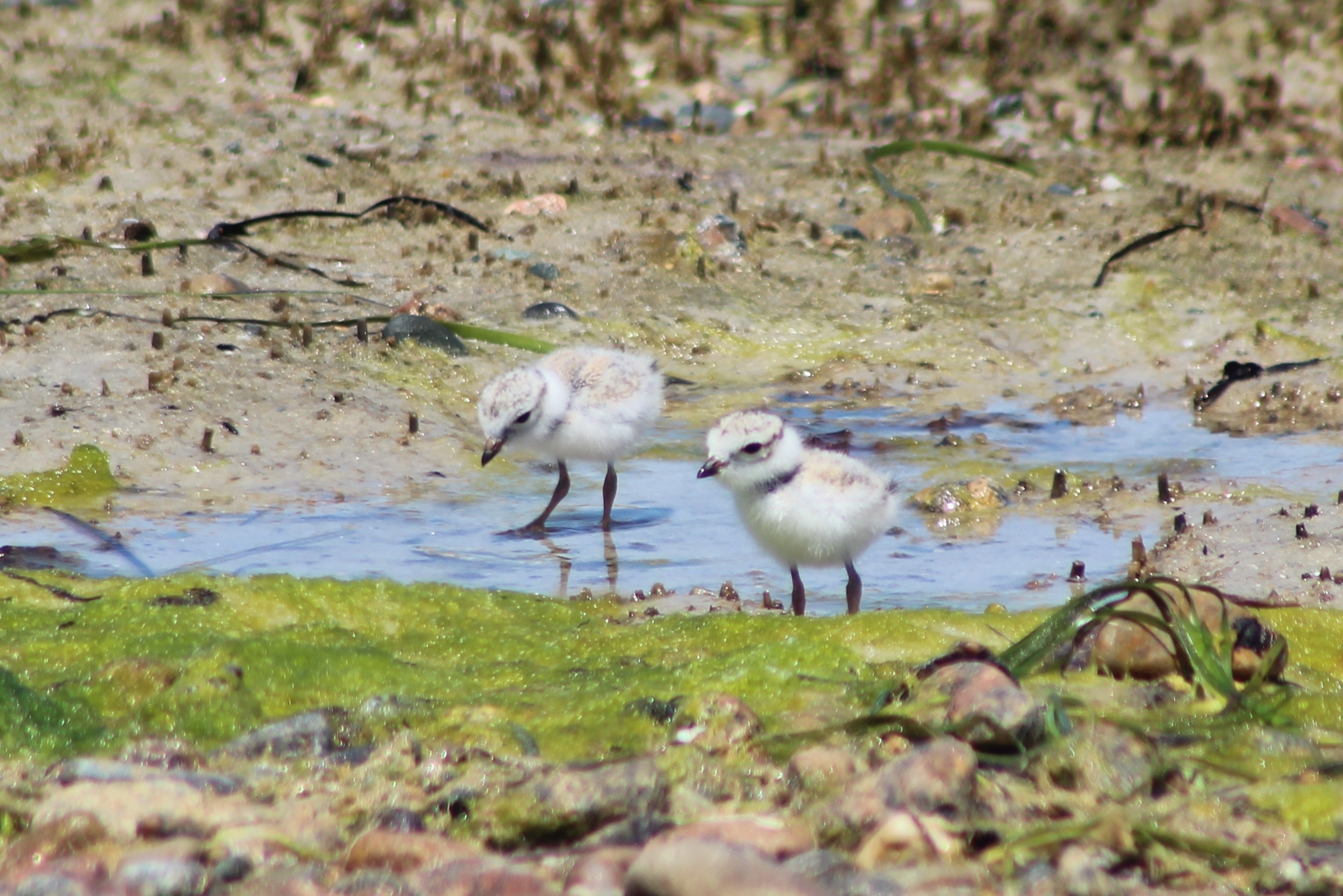 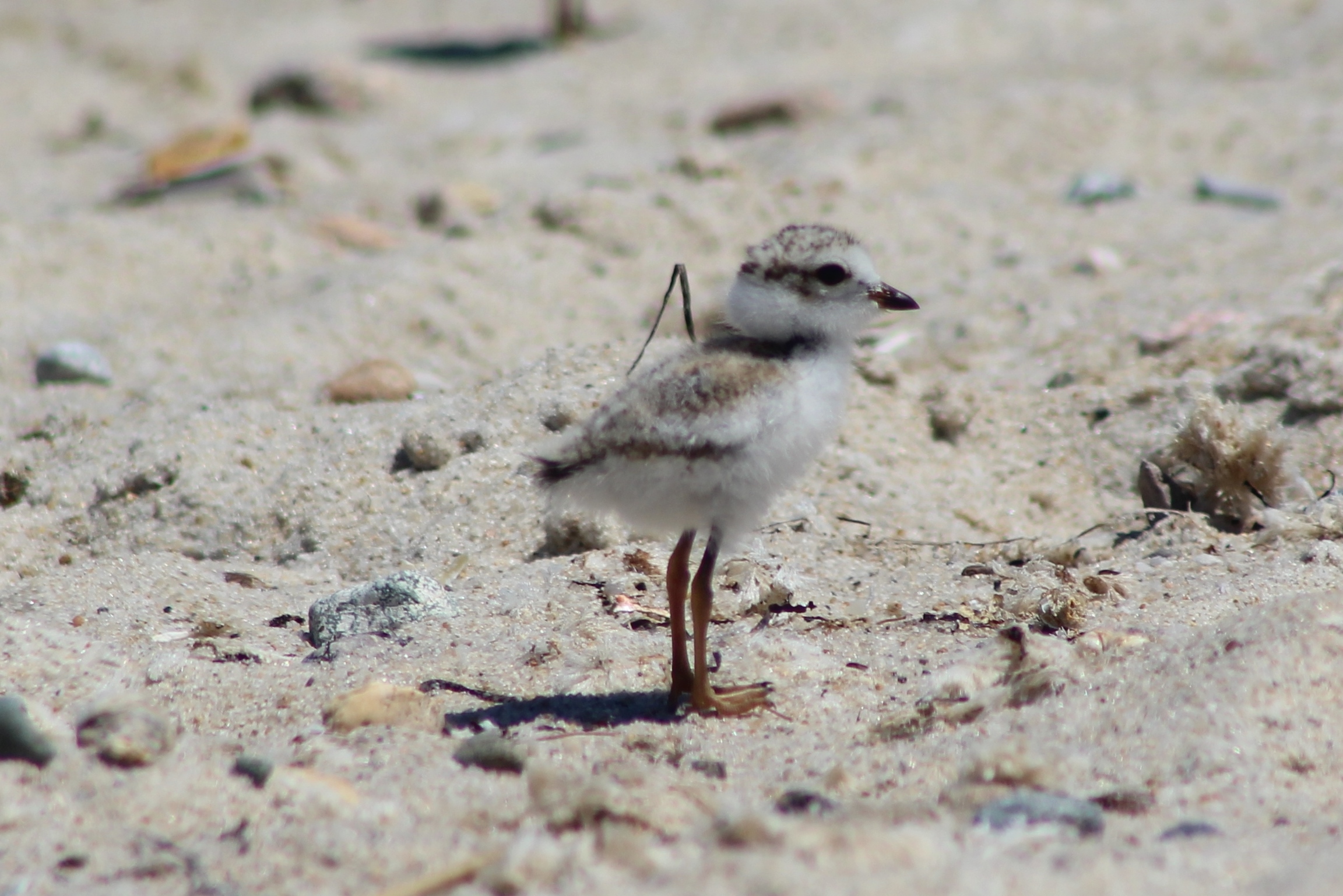 Nicky, the Crosby rebel, at 11 days old hanging out alone on the beach (photo by Nicole Gallup). 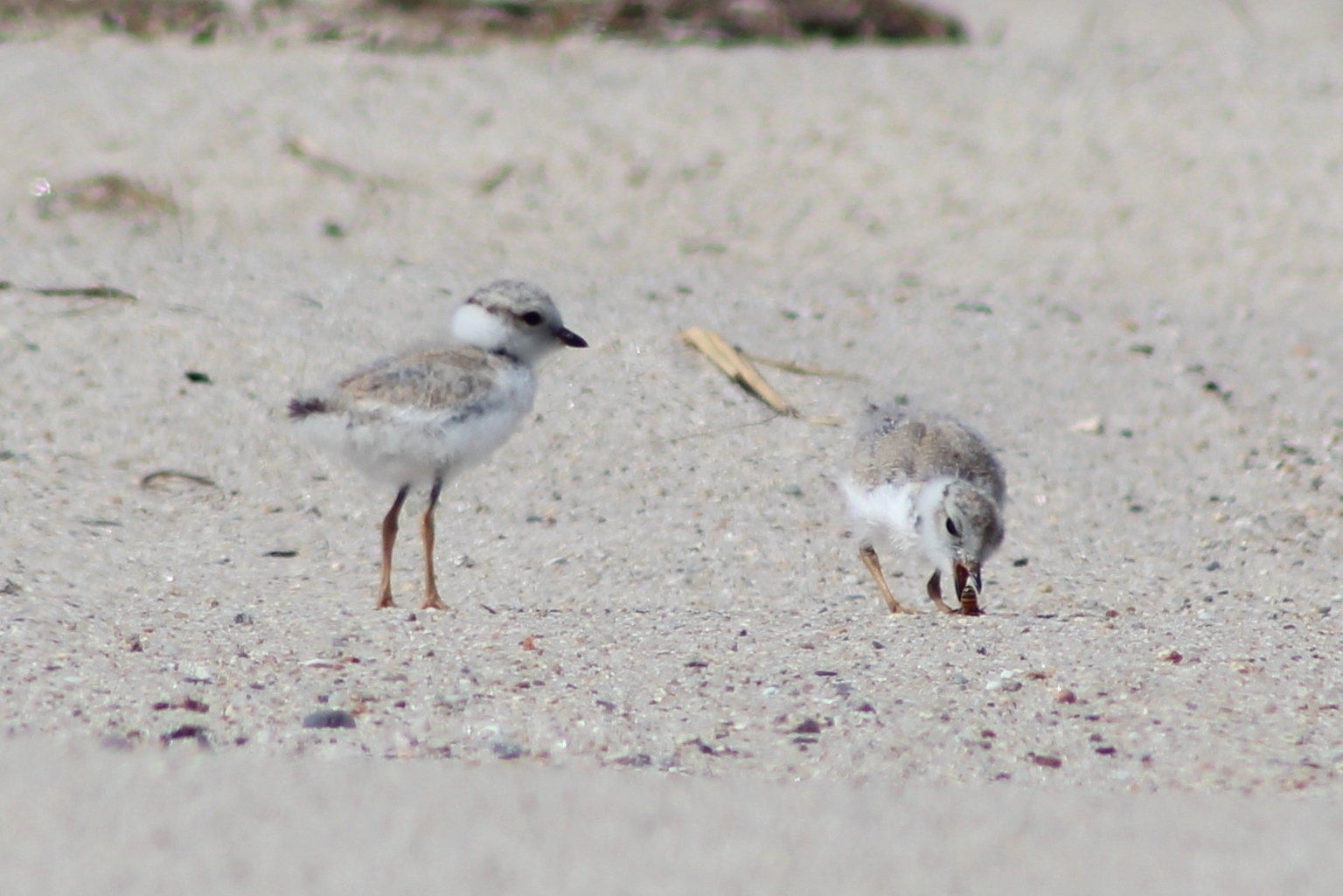 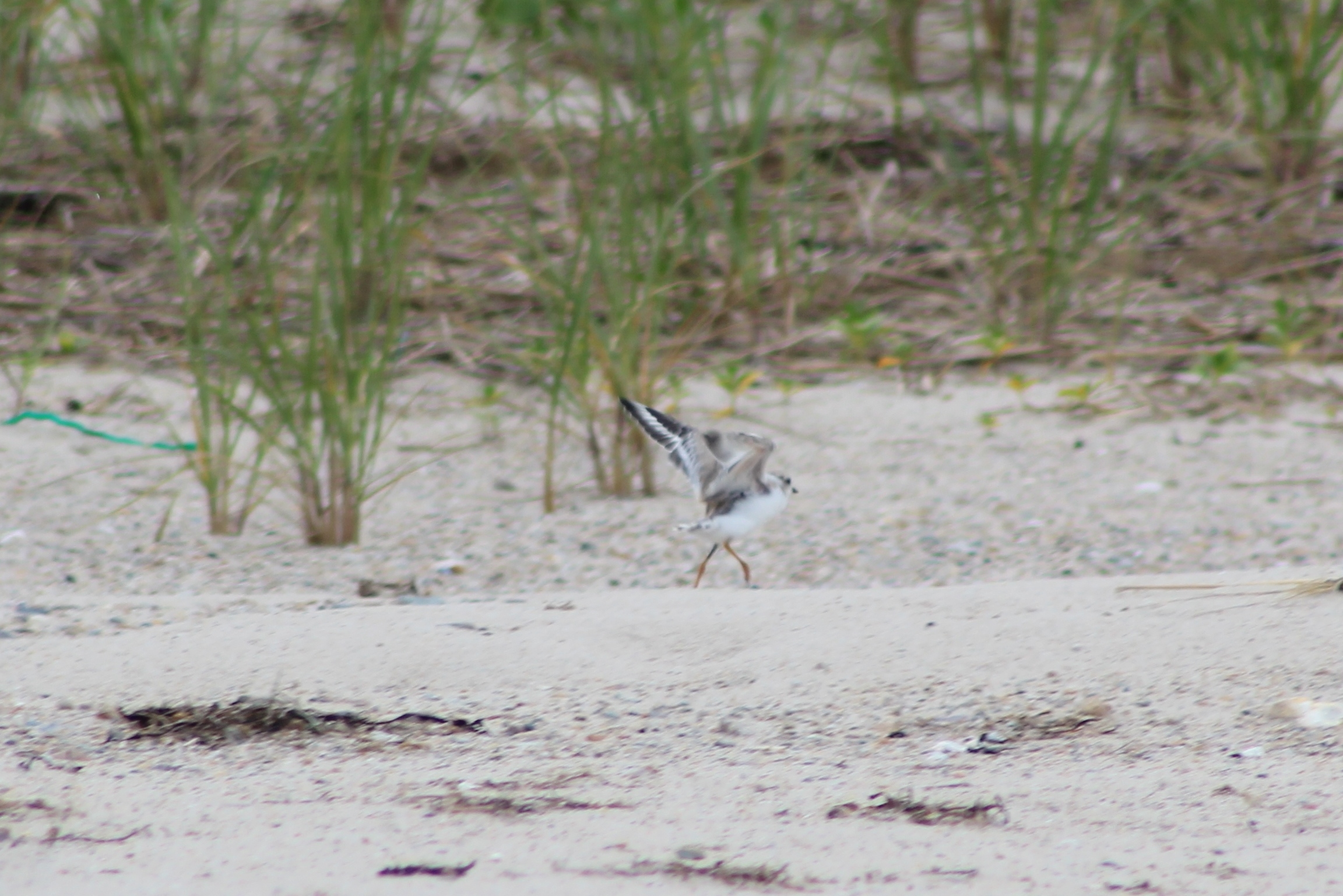 Nicky at 24 days old attempting flight — but really only gliding 15 feet while the legs were still running! (photo by Nicole Gallup)

Meanwhile, back in Eastham, the banded adult male plover–“El Bandito”– who we’ve been following for five years–hung out all summer at his barrier beach bachelor pad. He’d been spotted with two different females over the summer, but he simply could not hold on to a mate. Despite his bad luck at pairing up, Bandito maintained his scrapes (a male’s suggested nesting sites), defended his territory from a pair of plovers that tried to move in on his turf, and chased off other migrating shorebirds that stopped in for a rest during their travels. Our fingers are crossed that this tough little guy’s luck will change next season. 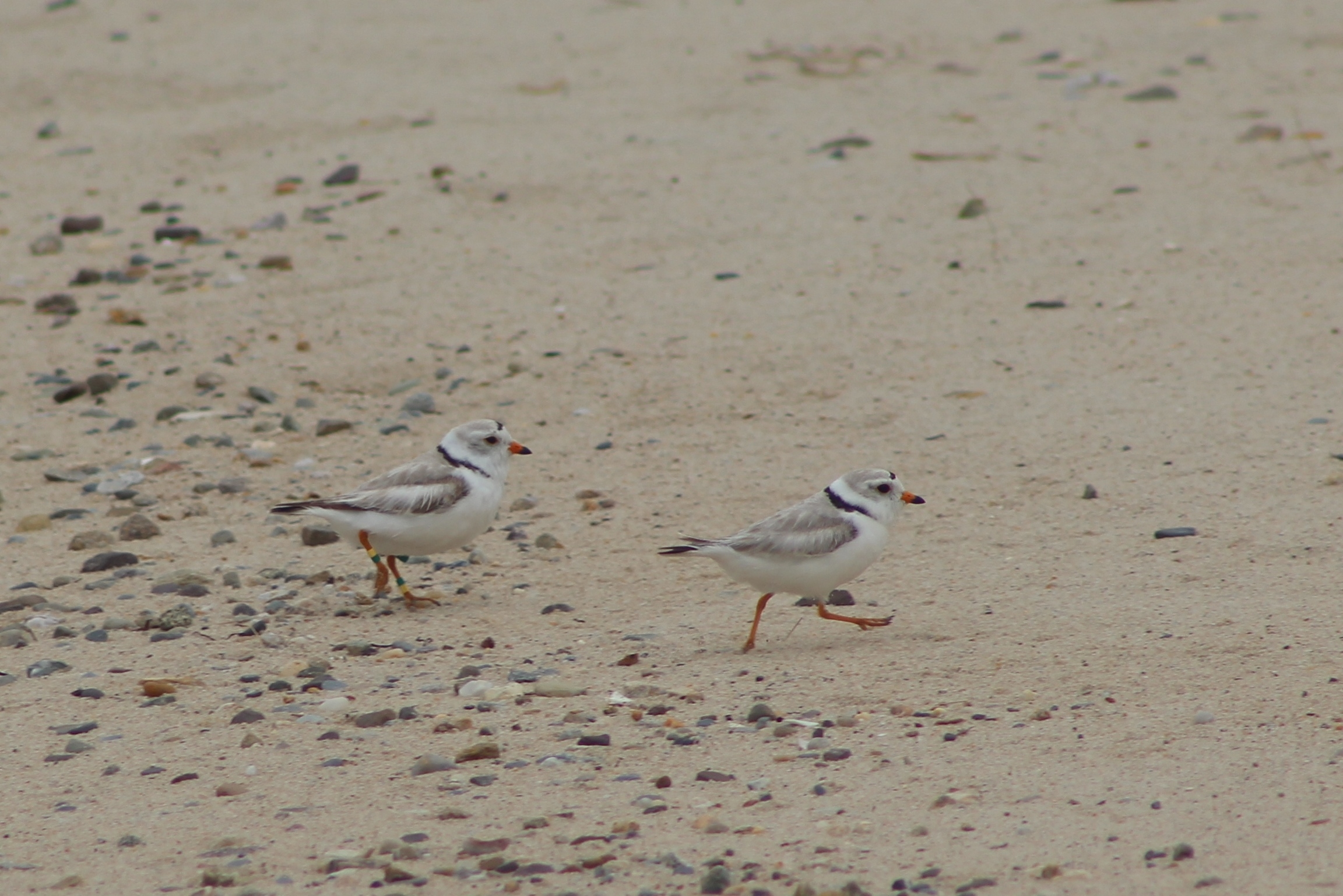 One rough summer. Bandito (left) defending his territory by chasing an invading male (right) that was attempting to move in with his mate (photo by Nicole Gallup).

And we can’t leave out our small Least Tern colony in Truro. At its peak, the little colony had about 40 adults, which is a good start.  Unlike plover monitoring, we never know exactly how many tern nests are being incubated nor how many eggs are in a given nest (it’s usually 2 or 3). We knew that the birds were close to having chicks. But on a visit a couple of weeks ago, we discovered that their nests had been wiped out by coyotes. We were so discouraged, we didn’t really pay attention to the defensive terns strafing our heads and pooping on our hats!

Those terns should have been a tip off. As we walked back down the beach,  we spotted a healthy-looking Least Tern chick! And then another! Two chicks, both roughly two and a half weeks old, had managed to survive the coyote massacre.  Perhaps because of their size, they’d been more mobile and able to find cover. 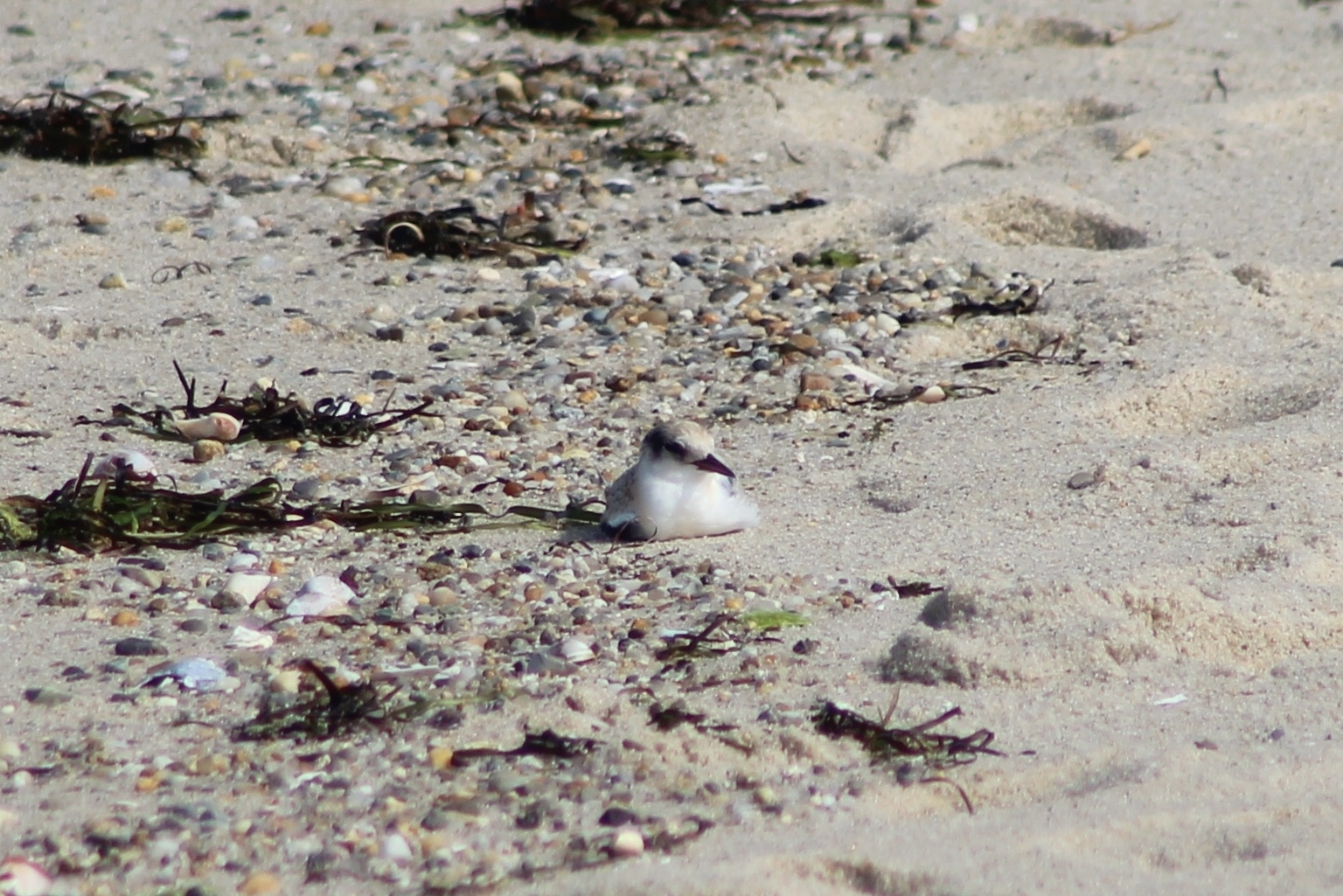 Lucky hanging out on the beach, waiting to be fed by mom or dad (photo by Nicole Gallup)

So our Least Tern season ended on a happier note with the fledging of the two chicks (and, yes, I named them: Lucky and Hope). Also, I only got pooped on at most ten times! 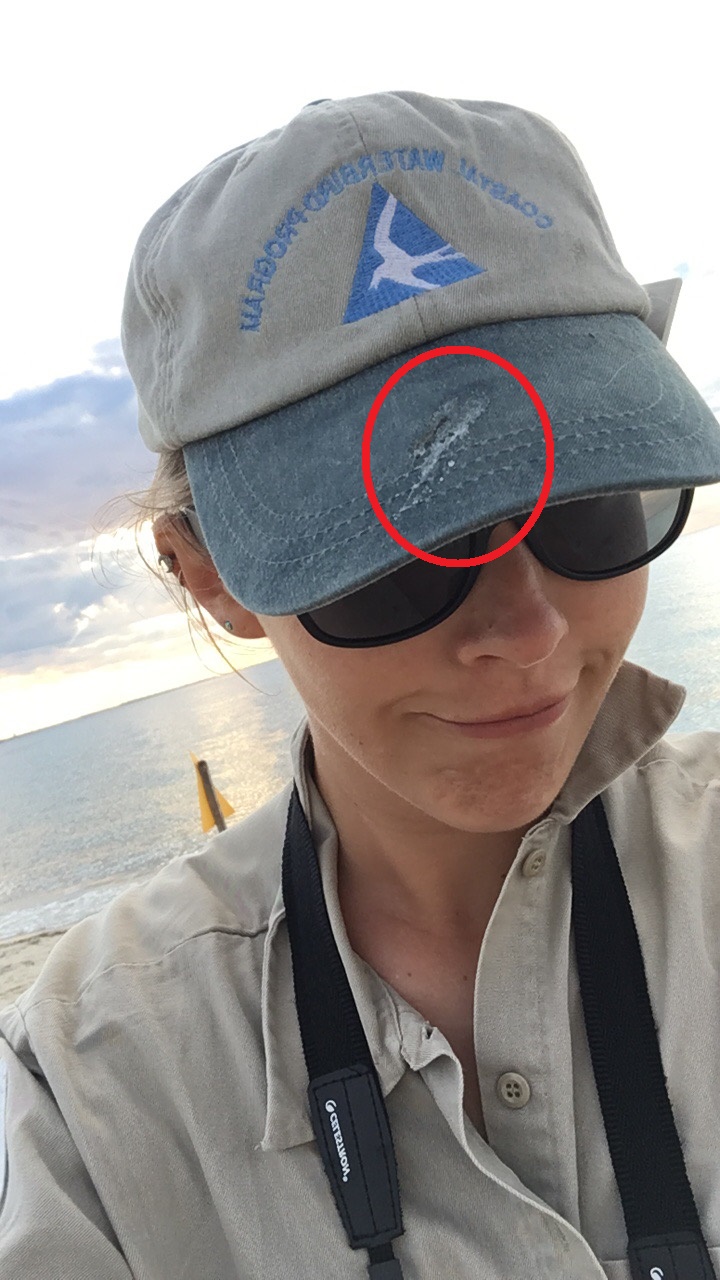 Fortunately, I wore my hat during this beach check! The rim really saved me from a face full of Least Tern poop (photo by Nicole Gallup).

Nicole Gallup has been the lead field technician for Wellfleet Bay’s coastal waterbird team. Along with monitoring nesting birds and engaging with the public about beach management practices, Nicole also took some wonderful photographs of this year’s breeding birds. We thank her for sharing them and for passing along her plover and tern-monitoring adventures this summer!