They’re not pretty, but necropsies are an important part of understanding the lives of sea turtles and the many challenges they face.

A necropsy is not for everyone; but each winter at the Woods Hole Oceanographic Institution, we have a packed house as staff and volunteers from Wellfleet Bay, the New England Coastal Wildlife Alliance, teachers and students gather to examine the inner workings of a sea turtle. 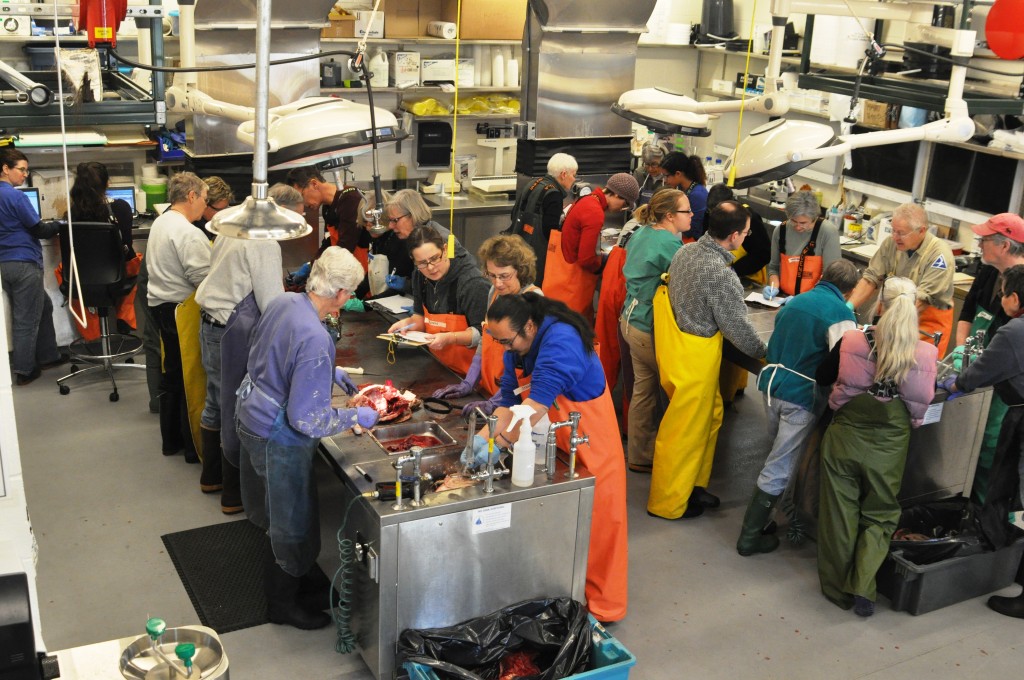 courtesy of Krill Carson and NECWA

Some people learn to cut. Others prefer to keep a little distance from the viscera and scribe instead. Both jobs are important, especially because we will have necropsied about 400 turtles by early March. 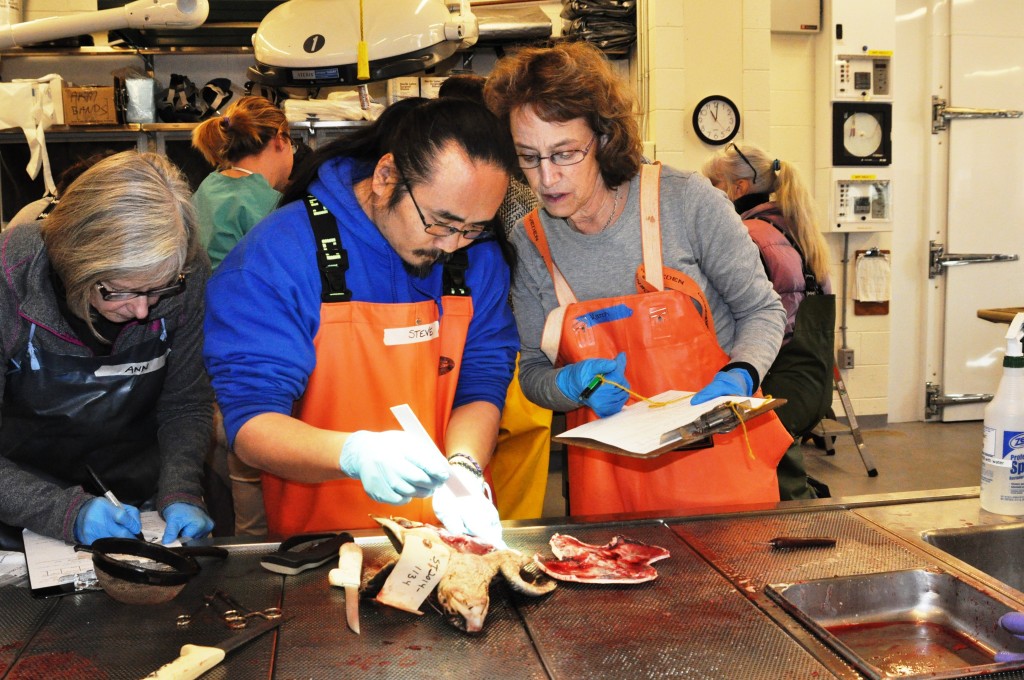 courtesy of Krill Carson and NECWA

Although there is a bit of gore, some organs are fascinating such as this trachea and pointed throat spines which keep a turtle’s food, such as jelly fish, flowing to the stomach. 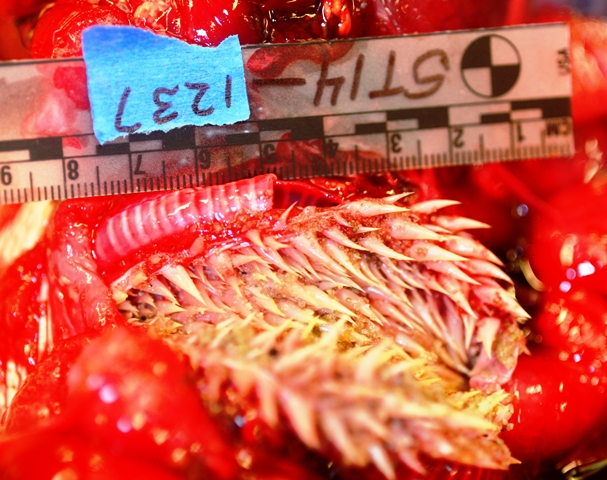 Examining stomach contents may not sound appetizing but it can be revealing. Here, we see the remains of a turtle’s crab snack: 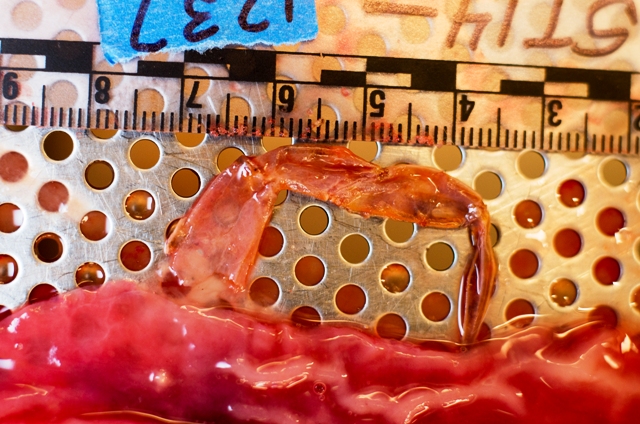 Also found:  stuff that turtles shouldn’t eat but too often mistake for healthy food , such as latex balloons: 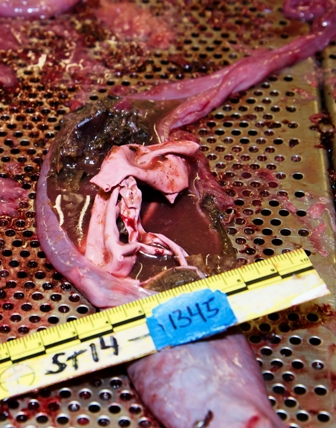 This loggerhead turtle accidentally swallowed a fishing line, another common turtle threat. The turtle died of cold-stunning, but the line caused major internal injuries from stem to stern, all of which would have killed him or her eventually. 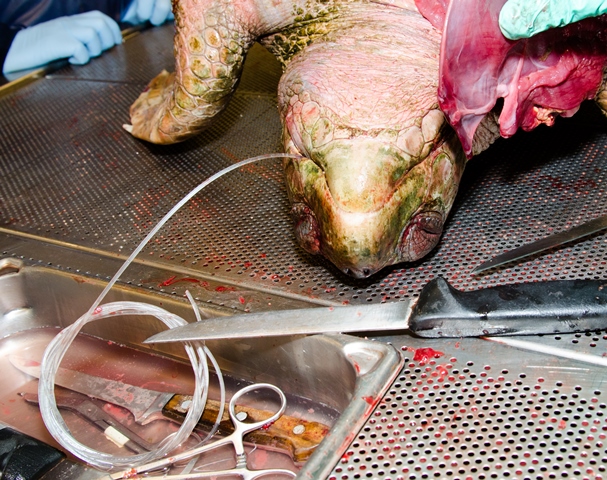 Fishing line (exiting turtle’s mouth). Note how much of it is coiled to the left ( photo by Karen Strauss)

Will these necropsies explain why more than 1200 turtles stranded on Cape Cod last fall? No. But they do offer us tantalizing bits of data, such as the isopods (marine relatives of pill bugs) we found for the first time in about a half-dozen turtles. 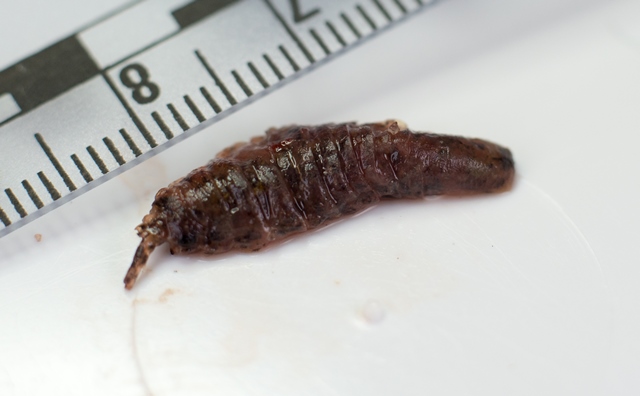 Marine isopods are found in  huge floating mats of seaweed that support juvenile turtles and other marine life in the Gulf Stream. It raises this question: did the big spike in turtle strandings come, in part, from a section of mat breaking off and floating into Cape Cod Bay, bringing lots of young turtles with it? It could be one of many possibilities.

Meanwhile, our work continues. We could use more help with scribing, so if you’re interested, contact volunteer coordinator Diane Silverstein. 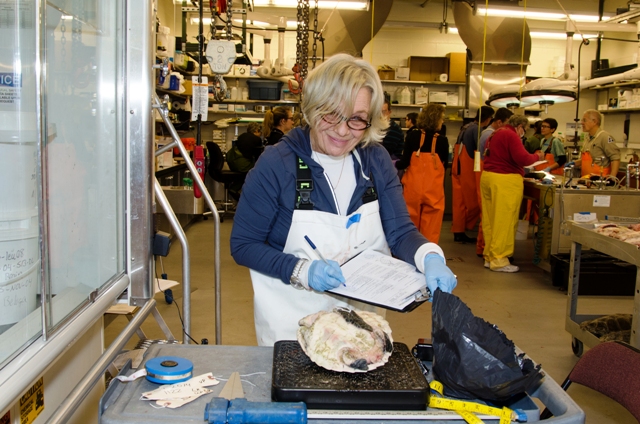 Our thanks to Karen Strauss for the video of a necropsy ; and to Karen and Krill Carson for the photographs.