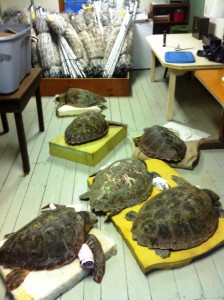 Fall—mid October to be exact—used to be the only time during the year we saw sea turtles. They would strand when the water got cold—they probably always did. Thoreau mentions them and ridley bones have shown up in Native American middens. I didn’t get on it until 1974 when I found my first stranded ridley in Brewster.

By the 1980s we were averaging 20 sea turtles per fall, mostly ridleys, and in the 1990s the average was around 80 per cold-stunned season. By the early 2000s we saw 95 sea turtles, mostly ridleys, but loggerheads and greens became more common. The last four years (2009 to 2012) we’ve averaged 250 sea turtles each fall and winter. What’s going on?

Summer was always considered the off-season for sea turtles. We’d get the occasional stranding and a few live sightings. During the late 1980s we started finding a dead

Generally the assumption has always been that the waters around the Cape and Island were a juvenile sea turtles’ haven, but now that we’ve had three adult loggerheads show up dead, it might be time to think of these northern waters a little differently.Is it climate change? Are there more sea turtles? It’s probably both. 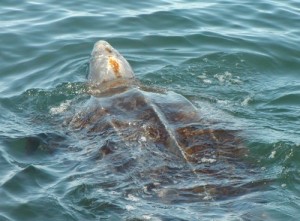 This year it looks like the same situation is unfolding with warm water and loggerheads being seen way to the north. The first strandings used to occur as early as mid-October. Now they rarely occur before the middle of November. The key factor is when the local water temperature dips below 50 degrees. That is happening later and later each year.We are now in the turtle rescue business from the end of May to the first of January. If it keeps getting warmer this will be a year-round job.

Bob Prescott is director of the Wellfleet Bay Wildlife Sanctuary

How you can help with turtle strandings this fall:
Volunteer to walk beaches.
• If you can volunteer a couple of hours a week, day or night, you could help save the life of a sea turtle by helping to get it off the beach before it freezes.
• Does walking beaches in 30 to 40 mph winds with air temperatures hovering around 30 degrees seem like fun? Well, we have an opportunity for you! How about helping us at 2 AM? We’re not kidding, we’re out there.

Volunteer to be a driver.
• All the live sea turtles are transported to the New England Aquarium Rescue Center in Quincy. We sometimes need to make two or three trips a day.