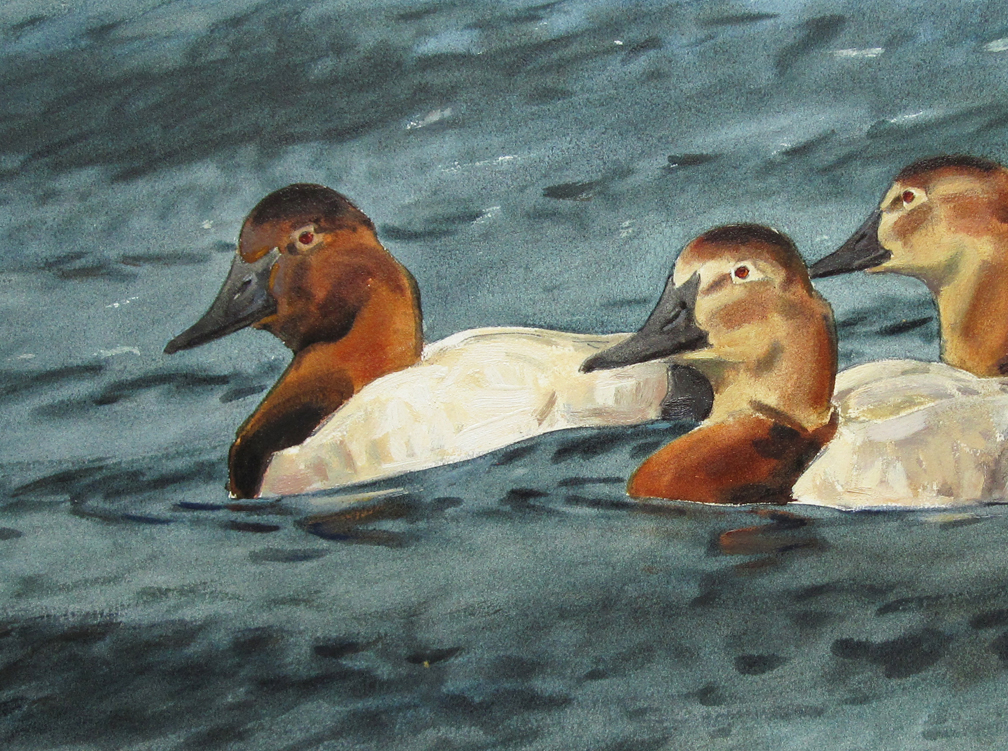 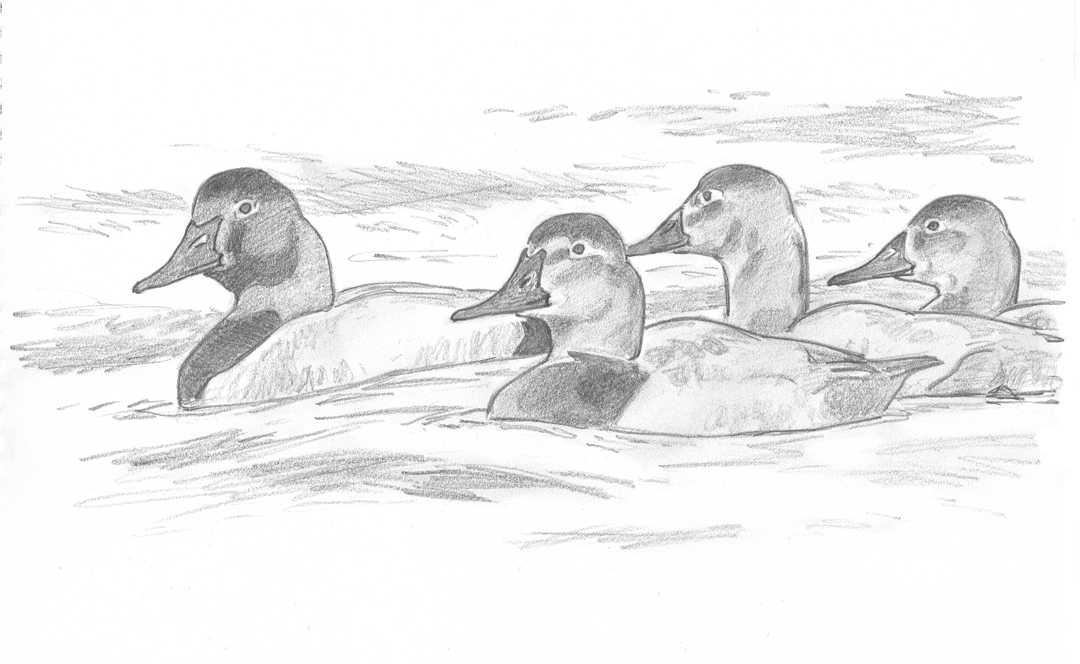 Back in the studio, fresh from my visit to Nantucket, I make a pencil sketch of a group of canvasbacks, based on digital photos taken at Hummock Pond.   I am contemplating various ways that I can convey the robust character of these ducks, when I remember a painting in a book I have about Bruno Liljefors, the noted Swedish animal painter.  It’s an oil painting of Arctic Loons, painted in 1901.

The color in the painting is rich and dark.  The water, especially, is pitched in deep, saturated tones, so that the edges of the darkly colored loons are lost and found against the background – a very appealing effect! 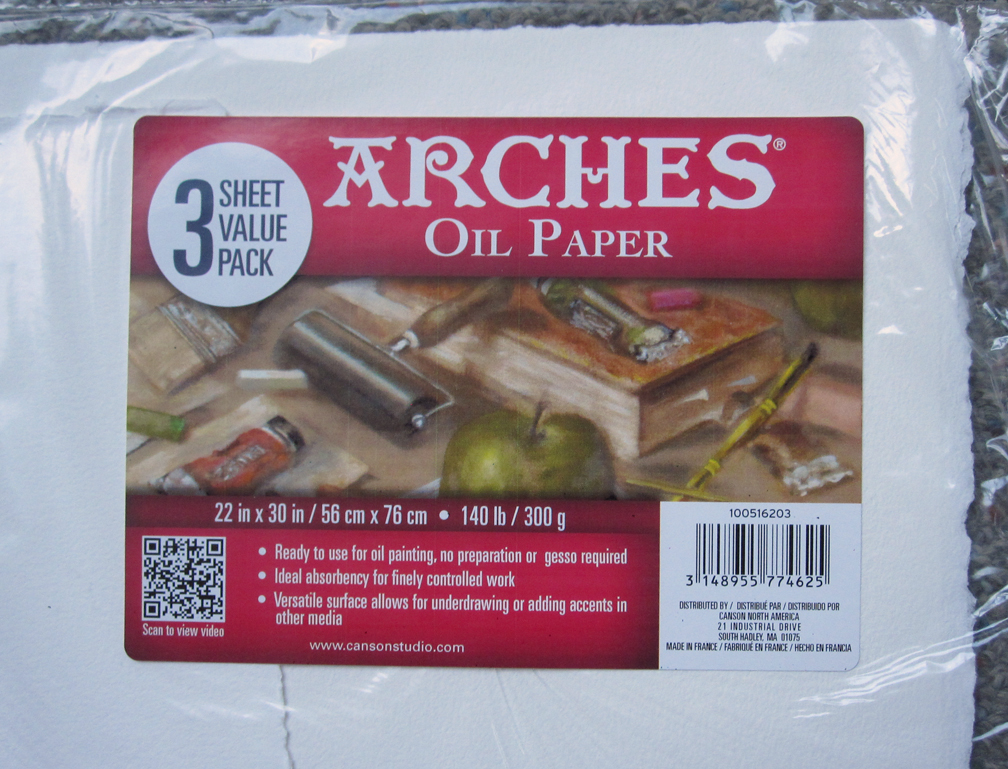 Several months ago, I had purchased some newly developed paper formulated for use with oil paints.  Called Arches Huile, the paper looks and feels like ordinary 140 lb watercolor paper, but is ready for oil painting without any additional surface preparation.   I thought the canvasbacks might be my opportunity to give this paper a try.

In my first session of painting, I put down a thin “turpy” wash of color, which soaks into the surface, but stays workable for a relatively long period. 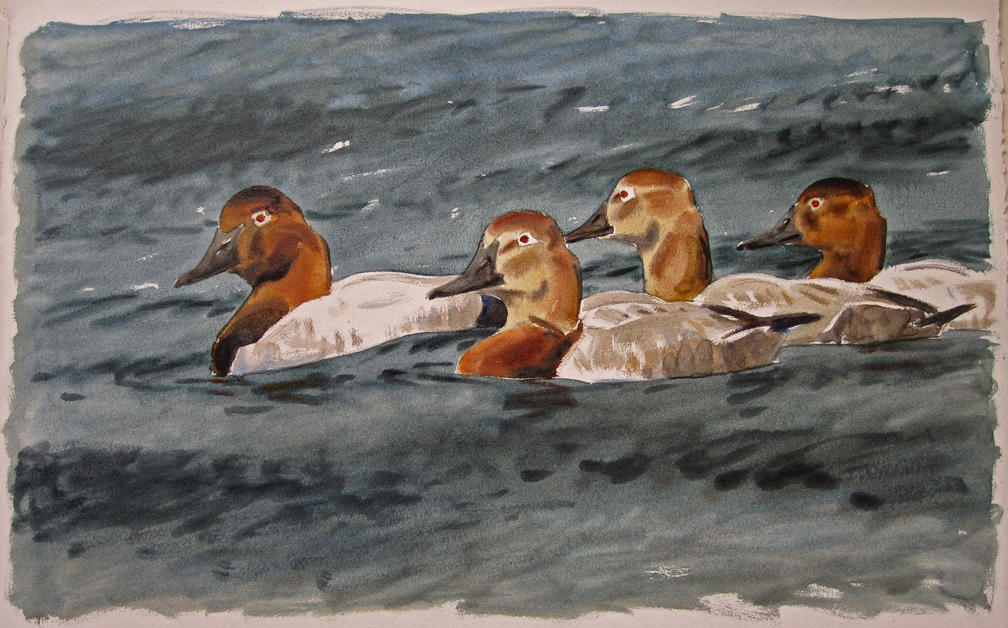 STEP 1 – after the first “washes” of thinned oil paints

After an application of wet color, “open time” is that period in which the paint can be freely manipulated BEFORE the passage dries.  Open time in watercolor is measured in minutes or seconds – a brief period due to the rapid drying time of the watercolor washes.  Oil paints are the opposite, with a much longer period of open time.  Hours, even days may pass before a passage of oil paint dries to the touch.  This first session of working on the canvasback painting is like doing a watercolor in slow motion, and I have plenty of time to develop soft edges in the wet washes of color.  After these first washes, I let the piece dry completely (which takes several days).

Next, I build up the detail and the modeling of the birds with heavier, opaque passages of color.  I decide to leave those first washes untouched in the background, since adding more layers of paint may destroy the sense of movement and that feeling of the wind riffling the surface of the water. 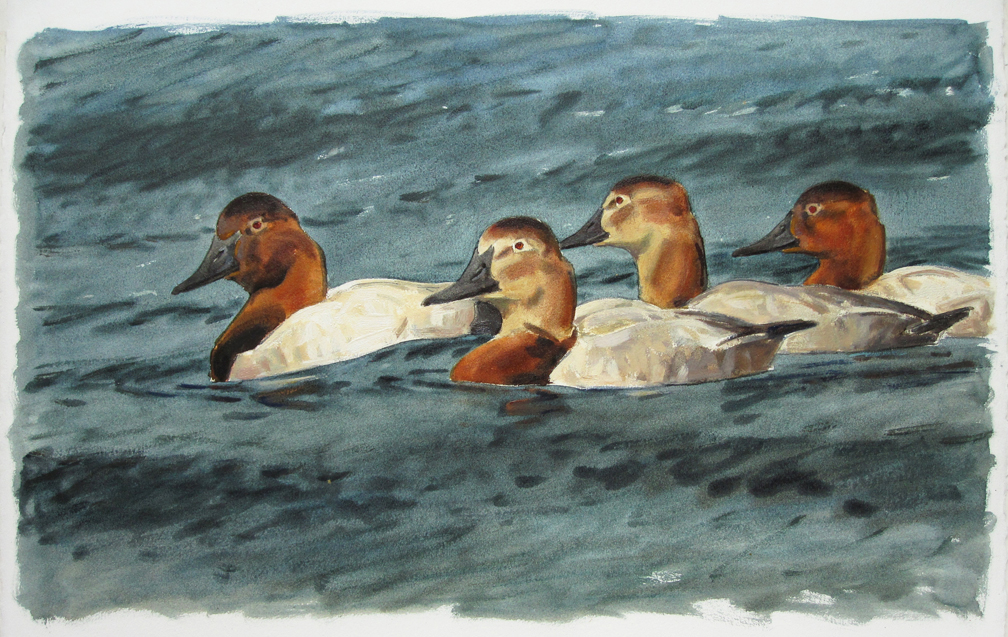 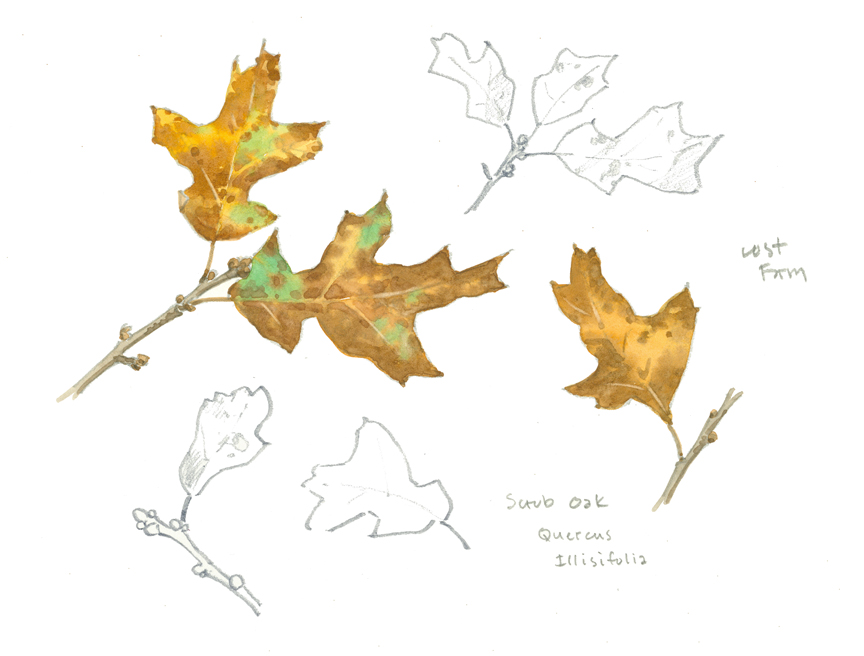 I spent the early morning hours of my second day on Nantucket at Hummock Pond, which abuts Mass Audubon’s Lost Farm Wildlife Sanctuary.  As any New England birder will tell you, November is “duck time”, and Hummock Pond is an excellent place to take in the show.  The light is good this morning, and an excellent variety of waterfowl are present, including canvasbacks, wigeon, scaup, bufflehead, gadwall, Canada geese and mute swans.  With a little searching, I also locate a single redhead and a single Eurasian wigeon! 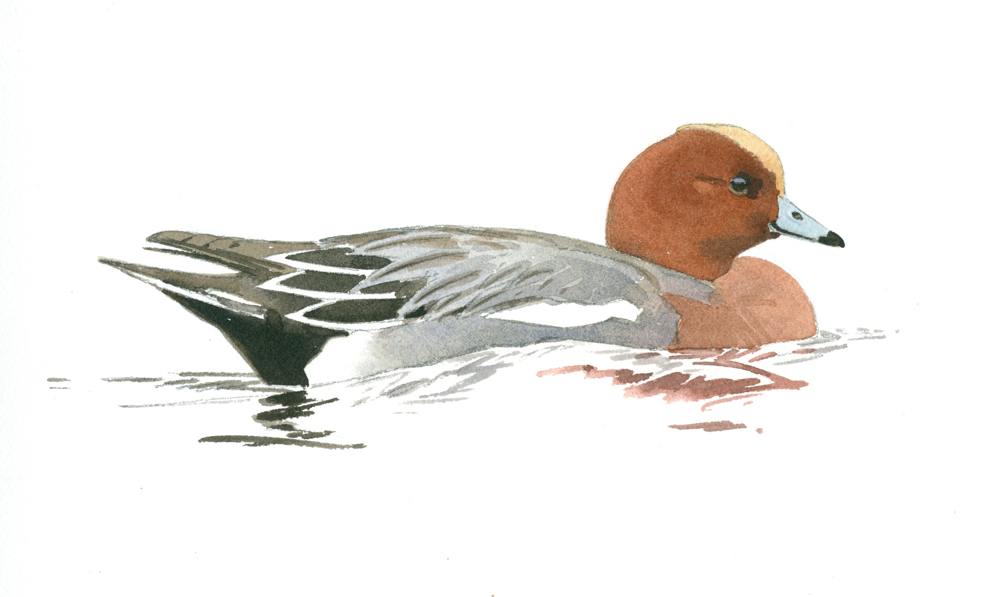 Canvasbacks are the NFL linebackers of the duck world, with necks like Gronkowski!  They exude strength and power.  A flock of two dozen “cans” are present when I first arrive, but most of them take flight within a half hour, and I’m left to study the four or five stragglers that remain.

Most of the ducks at Hummock Pond are quite far off – easy to I.D. with the scope but too distant for sketching.  I try to approach a group of wigeon more closely, but they spook and take off, so I content myself with sketching some nearby mute swans and buffleheads, filling a page in my sketchbook. 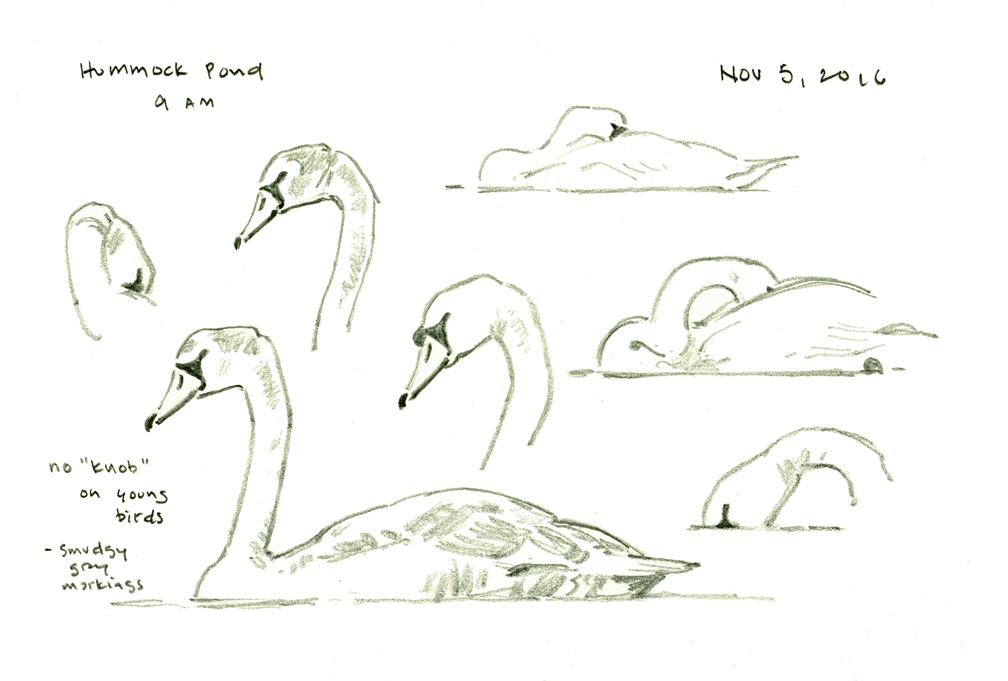 As I prepare to leave, some movement catches my eye abit further down the shore.  It’s a smartly patterned juvenile pectoral sandpiper.  It affords me stunning, up-close views with the scope, and the morning light is perfect to bring out every detail.  The bird is actively feeding, and in constant motion, but I make some pencil studies to explore its characteristic shapes and gestures, then take some digital photos.  Back in the studio, I determine to make a more comprehensive study. 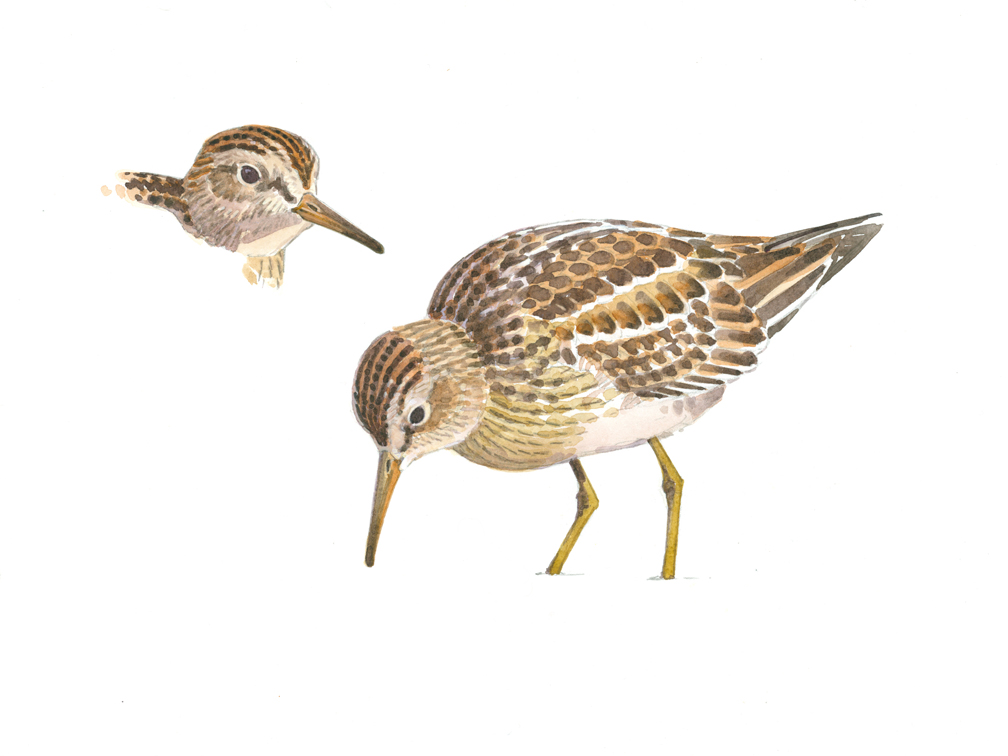 The challenge with a bird like this is to avoid over-rendering the details – and in the process, destroying any sense of life.   I struggle to maintain a light touch, despite the fact that to do the bird justice, I need to render almost every individual feather.

At Sesachacha Pond, (it’s pronounced SACK-a-ja!, like a sneeze, according to Edie) I find a single Forster’s Tern perched on a small lobster bouy or net float.  It scissors its wings and tail to maintain balance, and hunkers down in the breeze.  I especially enjoy the way the color of the bouy reflects onto the birds’s undersides, giving it a glowing belly! 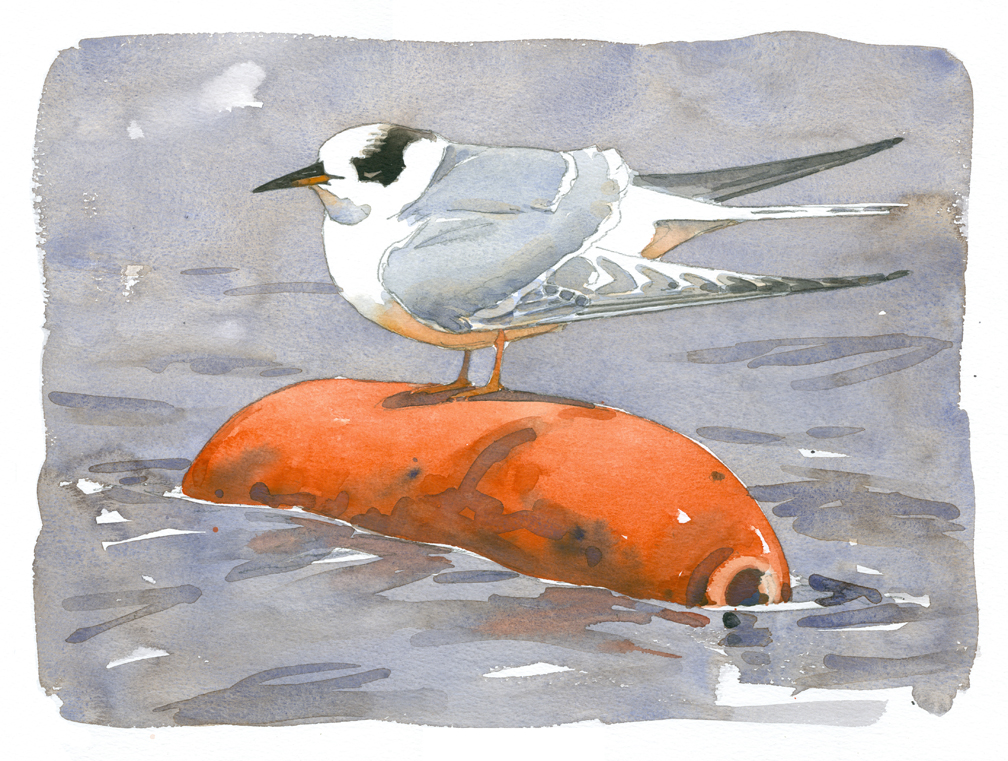 Although there should still be a few common terns around at this late date, the only tern I saw during my visit to Nantucket was this one. 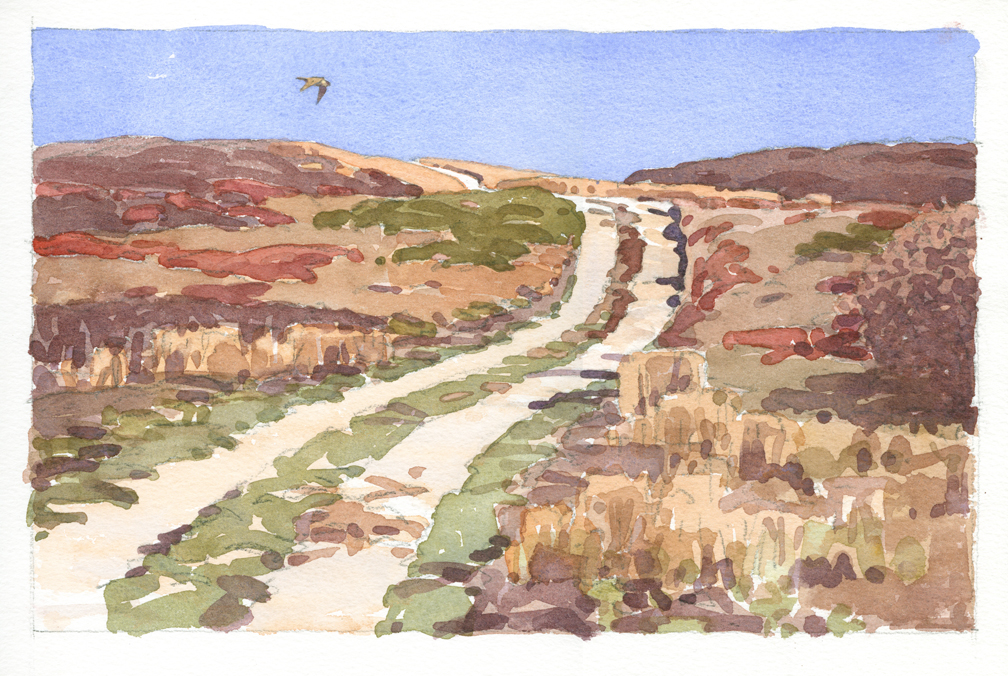 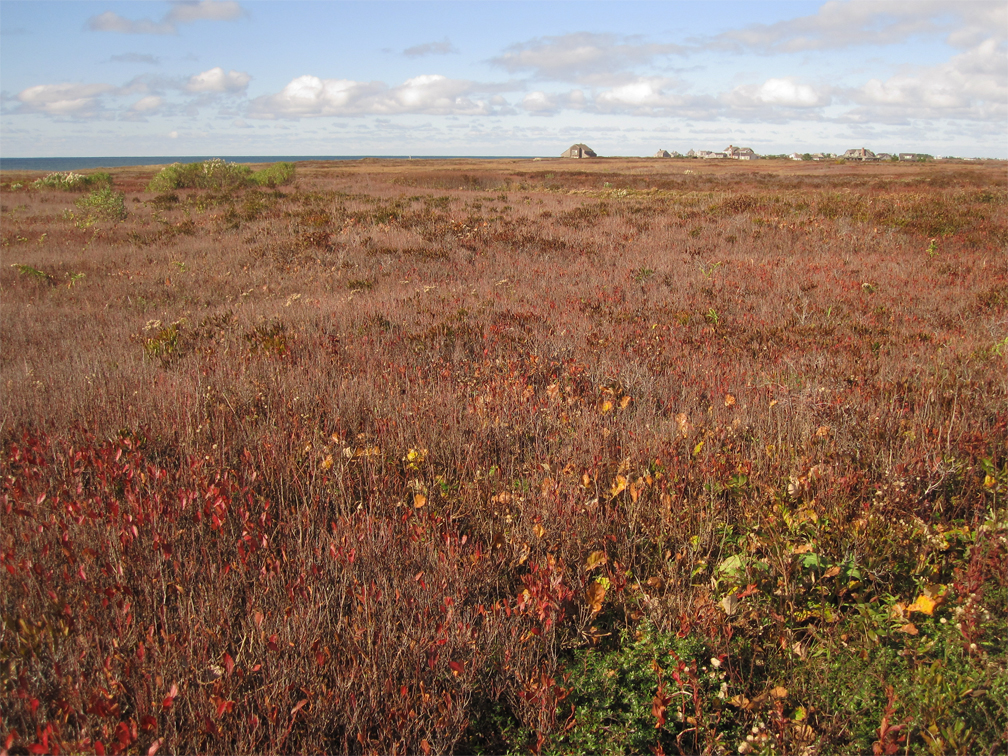 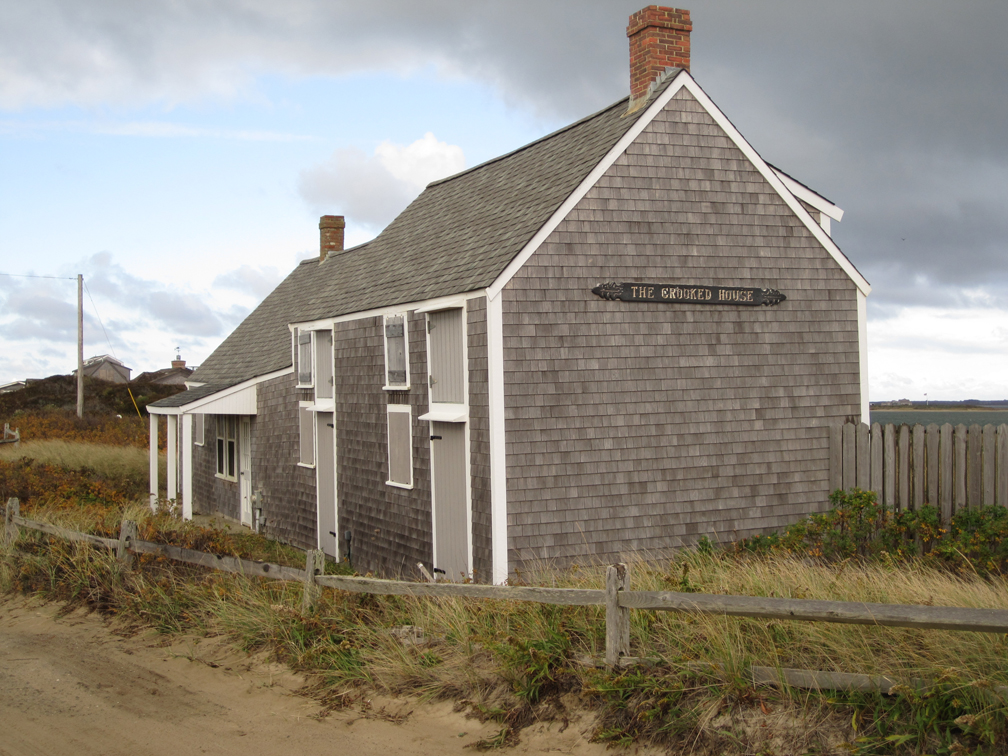 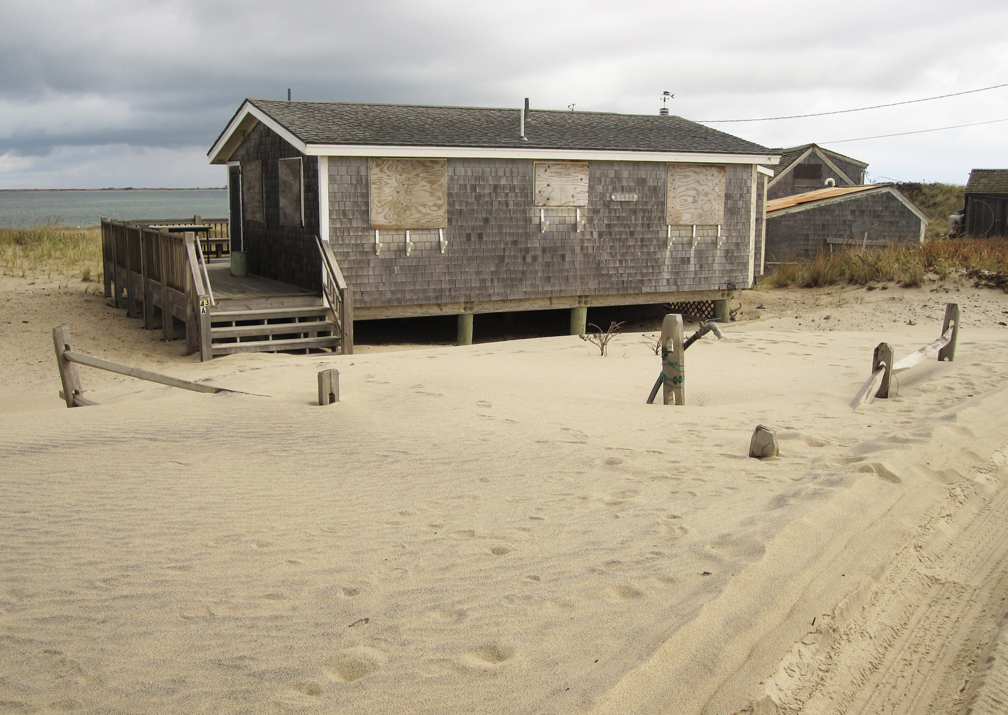 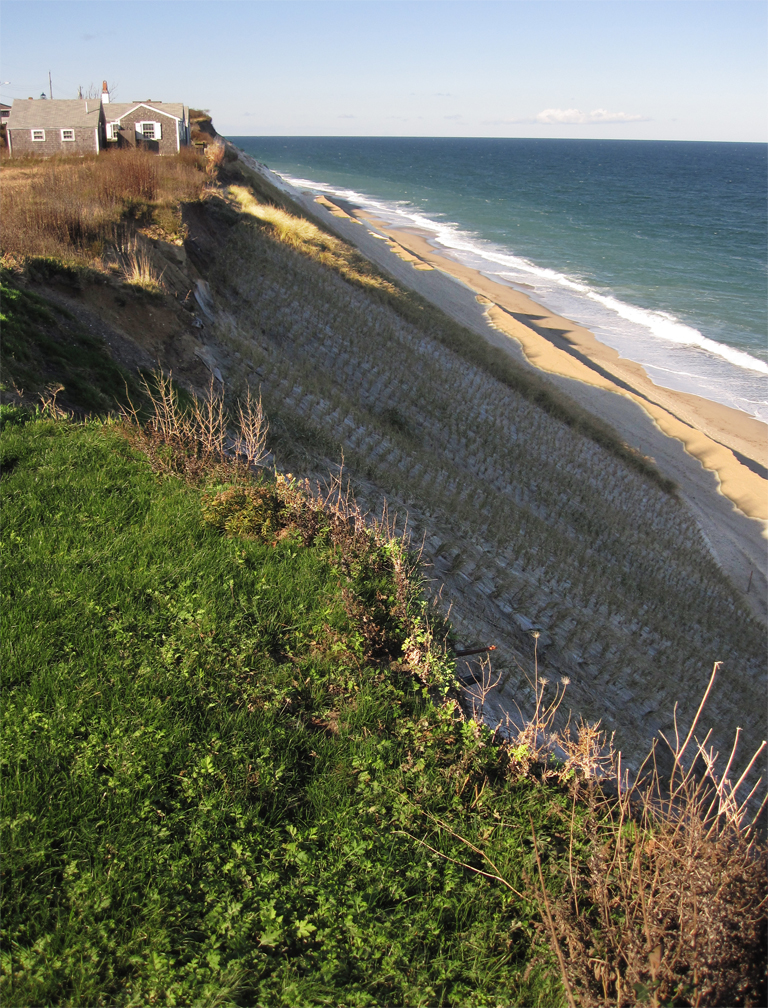 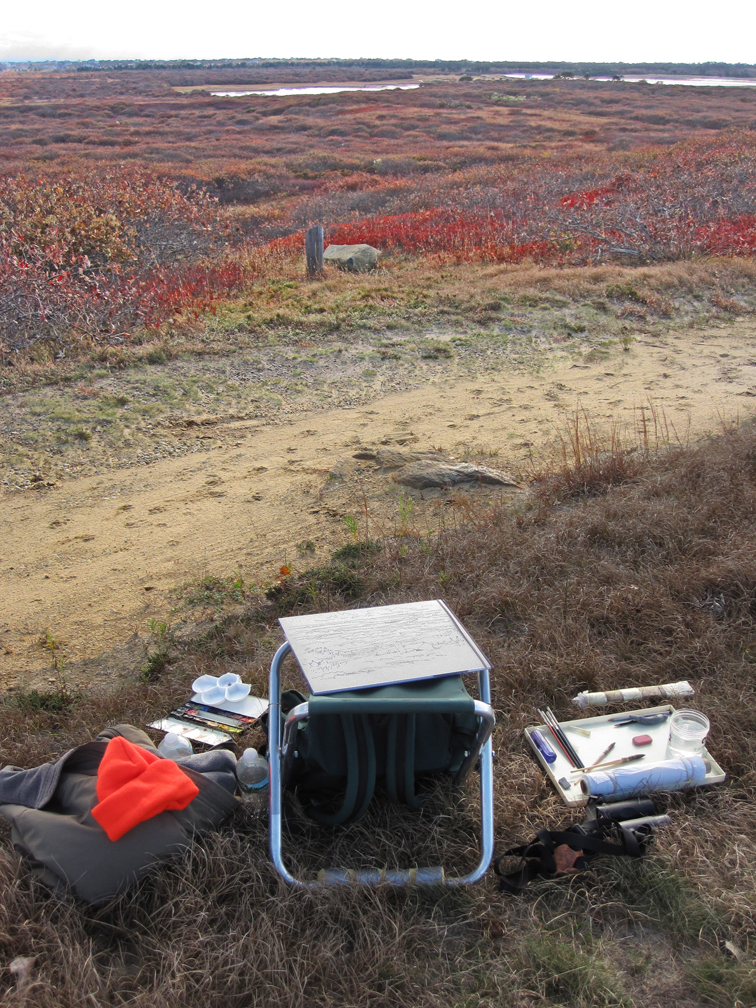 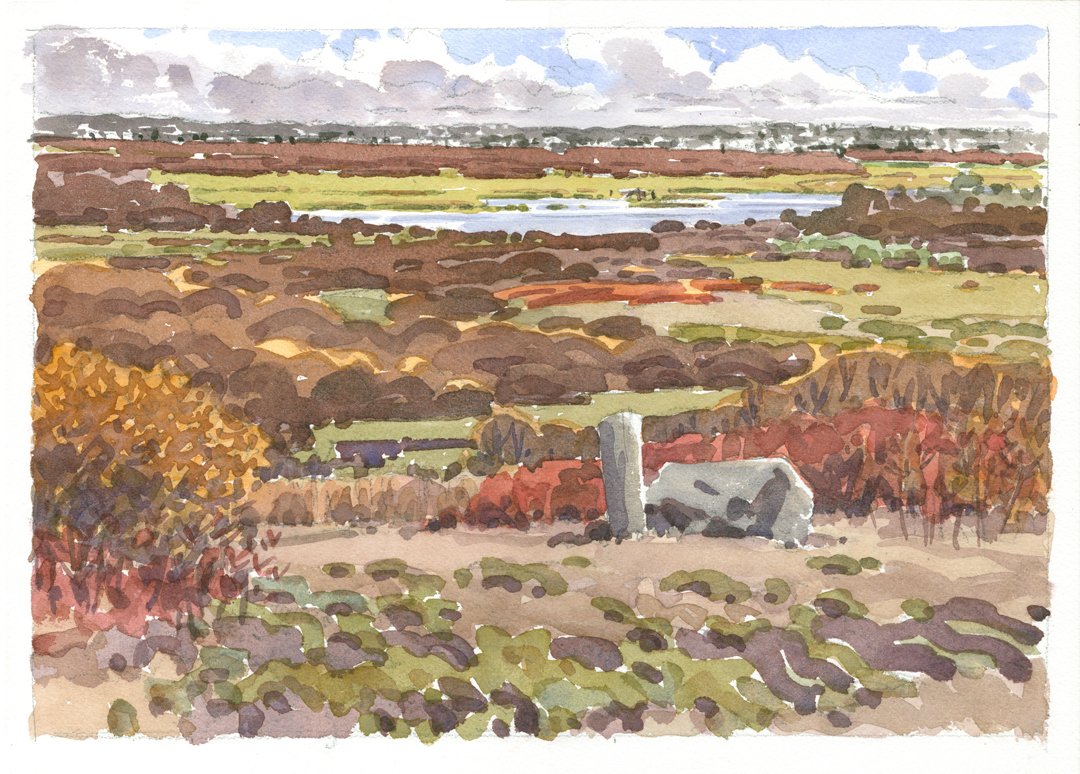 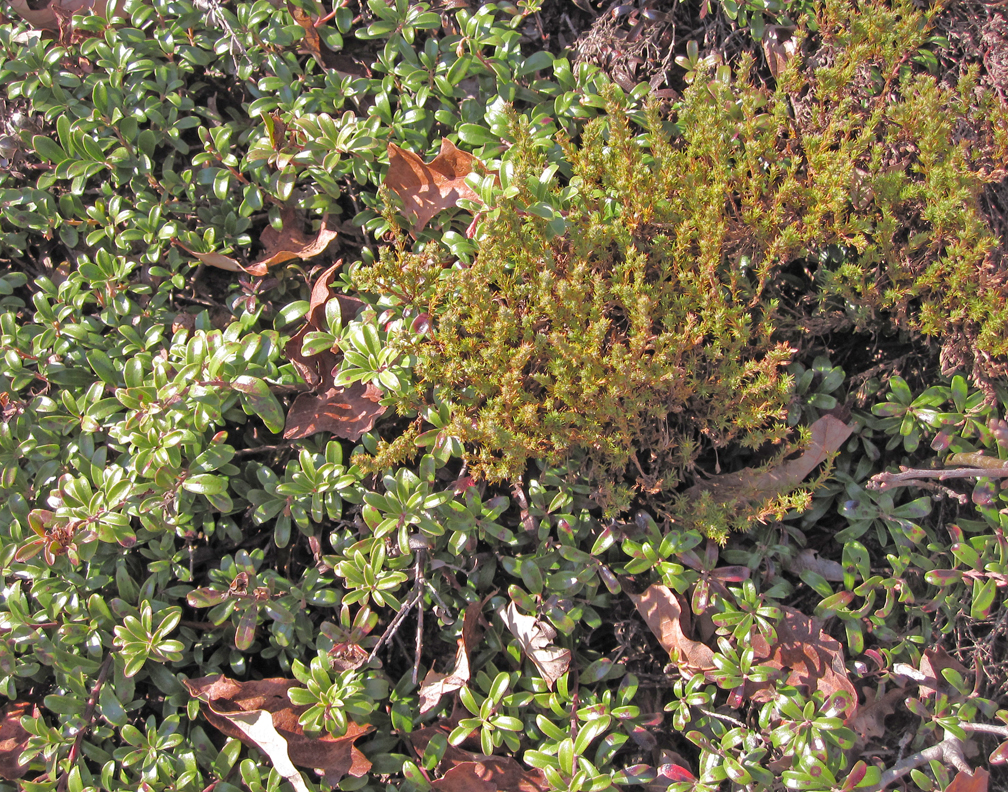