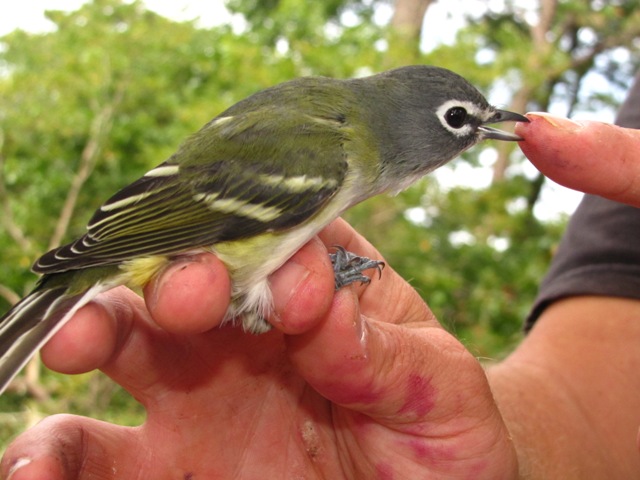 Wellfleet Bay returned to its roots this past month with the re-introduction of bird banding, something that was done very actively here by the Austin family from the 1920’s through much of the 1950’s before the property was acquired by Mass Audubon. 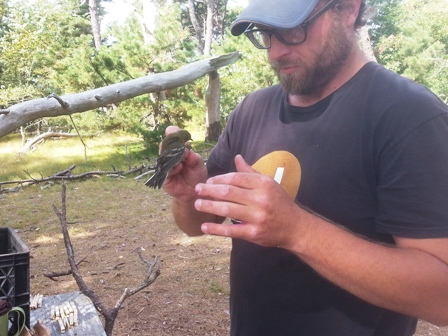 The banding is being conducted by licensed master bander and wildlife biologist James Junda and his assistants Caitie Porro, Michael Novak and Melanie Mancuso. James also oversees the banding that’s been going on for the past several years at the South Monomoy National Wildlife Refuge. 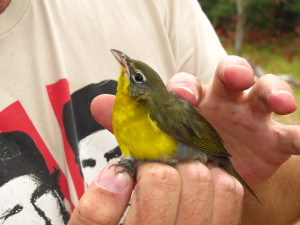 A Yellow-breasted Chat poses before its release.

Bird banding is a fundamental tool of bird research. Not only does it reveal a broader range of birds passing through during migration (compared to birds you can see in the field,) but it allows researchers to identify and record the sex, age, and health of an individual bird. If  carried out for many years, as it once was here, banding produces data that can provide useful information about migrating songbirds, species abundance, distribution and, in some cases, longevity. As we ,earn how migrants are using different parts of the sanctuary, the information can inform habitat management decisions as well. 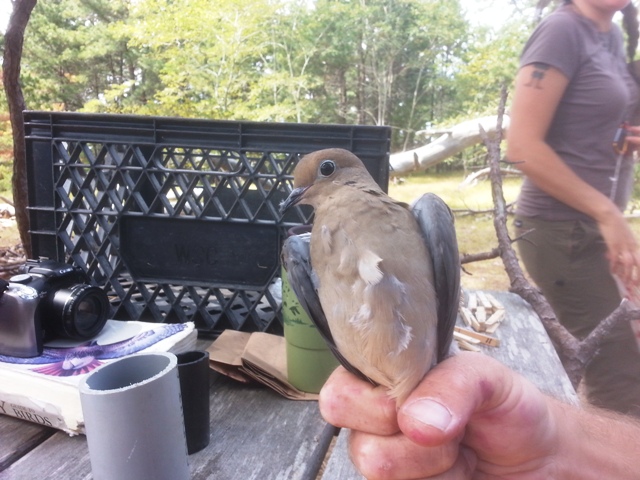 A relatively laid back Mourning Dove.

And banding  offers more than science. It’s also a rare chance to see a wild bird at very close range; to appreciate how it feels, to see details of its feather colors and structure,  and even to get a sense of a bird’s behavior. For whatever reason, Blue Jays placed on their backs while they’re being weighed stay put. Catbirds are always noisy when they’re held. Mourning Doves appear relatively mellow. But as fascinating as it is to see such things at close hand, it seems that just about everyone’s favorite part is when a newly-banded bird gets to fly away. 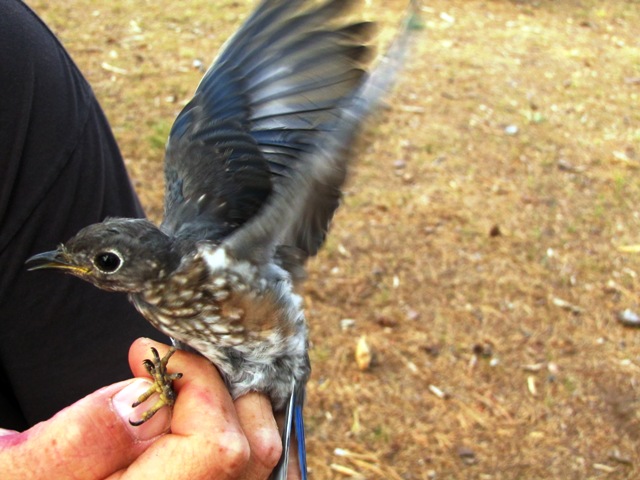 Juvenile bluebird is ready to get going (photo by Mark Faherty)

Among some of the birds banded since the banding station started work on September 20: a Dickcissel, a Yellow-breasted Chat (twice), three Gray-cheeked Thrushes, a Philadelphia Vireo, a Blue-winged Warbler, a Lincoln’s Sparrow, two Scarlet Tanagers, and a Black-billed Cuckoo.