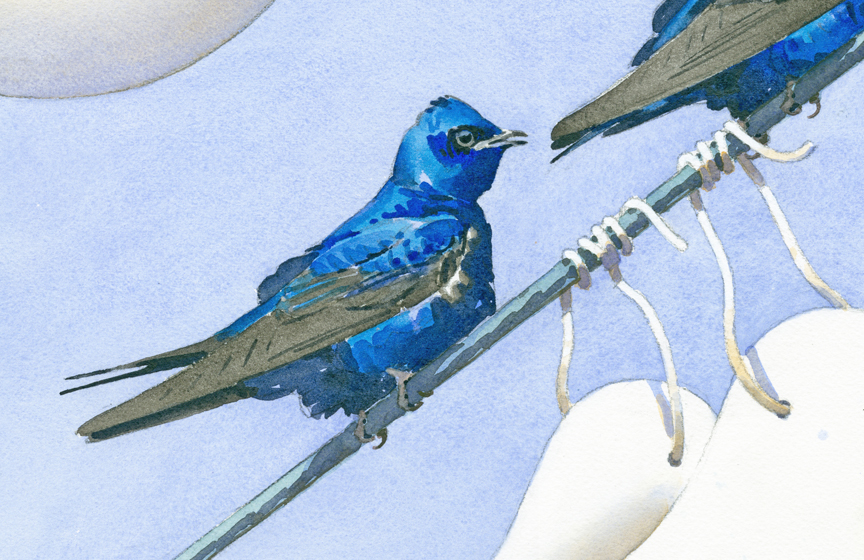 I spend the night at the South Shore home of Julianne and David Mehegan.   Gracious and generous hosts – thank you both for opening your home to me!

Fortunately, the day starts out DRY, with a forecast promising no further rain until the afternoon.  I say my good byes to David and Julianne and get an early start to North River Wildlife Sanctuary in Marshfield.   This is a bustling sanctuary with a well-appointed visitor center.  As I arrive, visitors are gathering for guided walks and the staff is preparing for the day ahead.

I meet David Ludlow, who is full of advice and helpful tips on birds, wildflowers and other current points of interest on the sanctuary.  I want to see the North River first, so head out on the River Loop.  A field sparrow sounds off in the brush of the upper meadow as I cross Summer Street, and a bluebird chortles from the woods.

A “colony” of purple martin gourds (actually plastic facsimiles that are easy to maintain) has been erected in the upper meadow, and I spot a dark bird perched on one of the supporting cables, but assume it’s probably a tree swallow.  My binoculars tell otherwise – it’s a purple martin!  I start to draw and within a half hour another martin arrives.  They check out the gourds and sit on the cables, squabbling occasionally – these are two males. 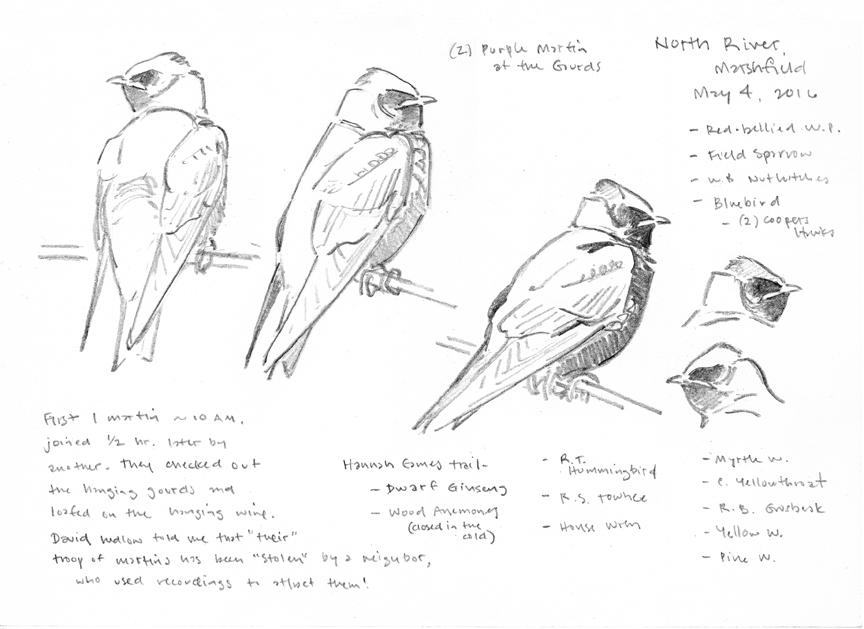 I learn later from David that some of the North River martins had moved to a neighbor’s set-up, who even used sound recordings to attract them.  But, more recently, I’ve had news that the martin colony at North River is doing well, with four or five pairs nesting in the gourds.   I DO hope there are enough martins to go around! 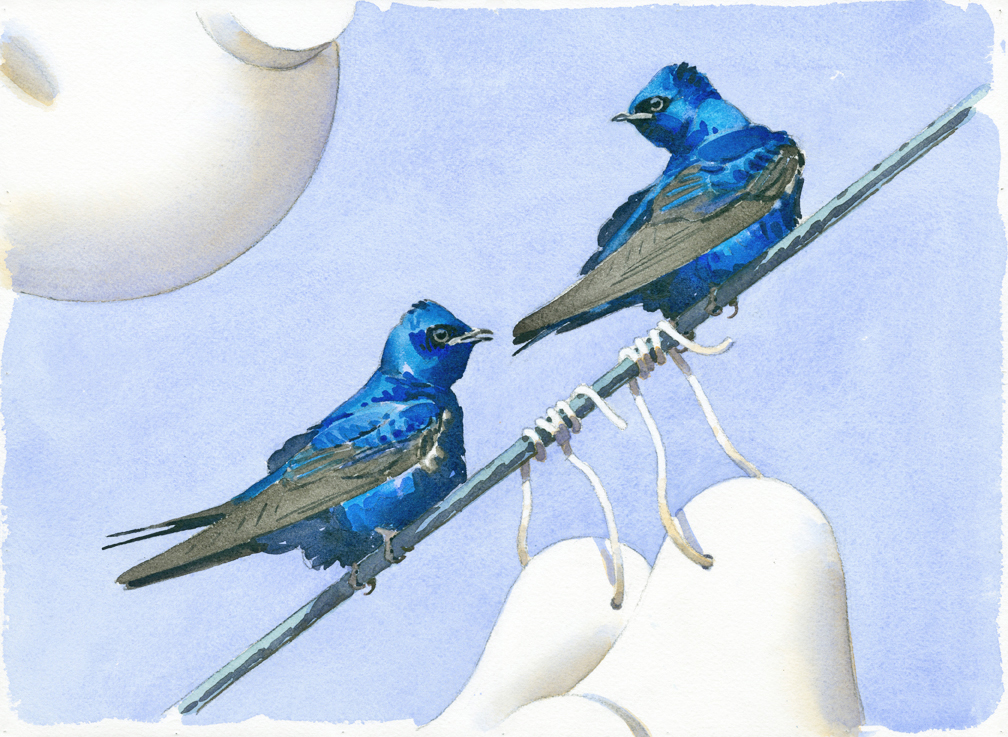 This painting, which I produced later in the studio, plays on the stark contrast between the angular shapes of the birds and the regular, rounded shapes of the artificial gourds.  Very dark birds with shiny, iridescent plumage can be challenging to paint.  In an instant, any part of the bird might go from bright blue to jet black as the angle of light striking the plumage changes.   The glossy plumage makes for lots of abrupt shifts in value as various parts of the bird catch the light.  I may have gotten the blue highlights abit bright here, but I didn’t want to lose any more of the modeling of the bird’s forms by making the highlights darker.

In the lower end of the meadow, closer to the river, a big platform has been erected to attract nesting ospreys, and sure enough, a bird sits on the nest, likely incubating eggs. 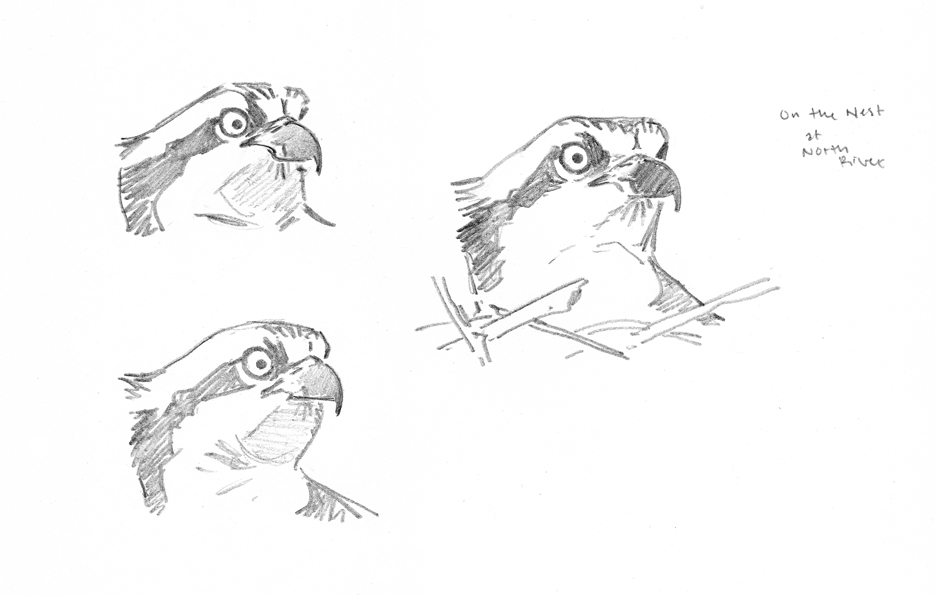 The platform was erected in 2009, but this is the first year ospreys have used it to established a nest.  Needless to say, David and the staff are excited!  (Addendum:  I spoke with sanctuary director Sue MacCallum on June 21, and learned that the parents are bringing some surprisingly large fish to at least one chick!)

With my scope, I have superb close-up views of the incubating bird, and get to work with my sketchbook, attempting to capture the angular shapes of the head and that intense, angry look on the bird’s face.  I start another drawing on watercolor paper that I finish later in the studio… 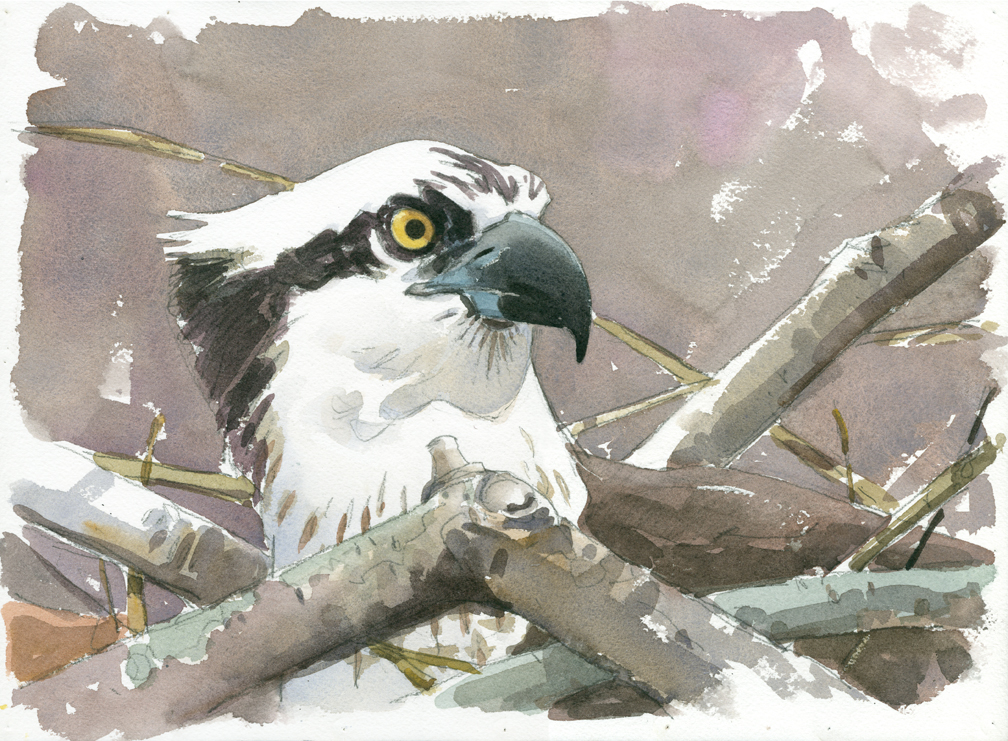 From the upper end of the meadow, I like the elevated view of the North River. I had left my watercolor easel in the car, but found that I could use my telescope as an easel by splaying the legs wide and propping my watercolor pad crosswise on the barrel of the scope.  Necessity is the mother… 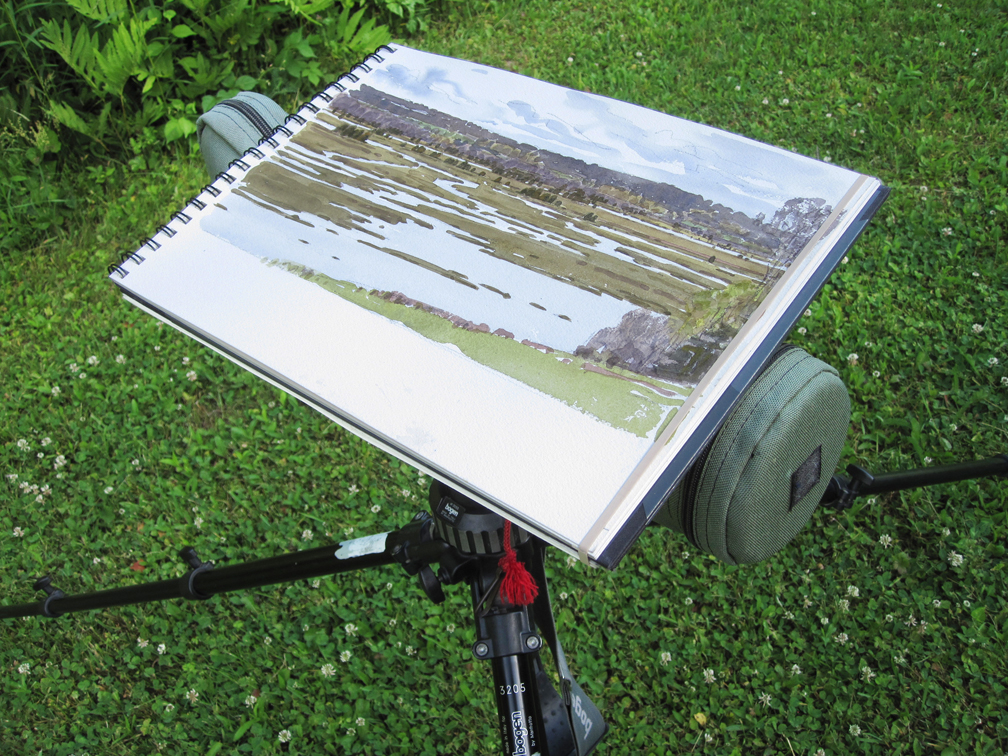 The cloudy day brings out the subtle spring colors on the distant hills.  It’s currently high tide and the channels in the marsh make interesting patterns.  Also appealing are the cedars on the upper marsh, which march across the scene in a series of dark accents. 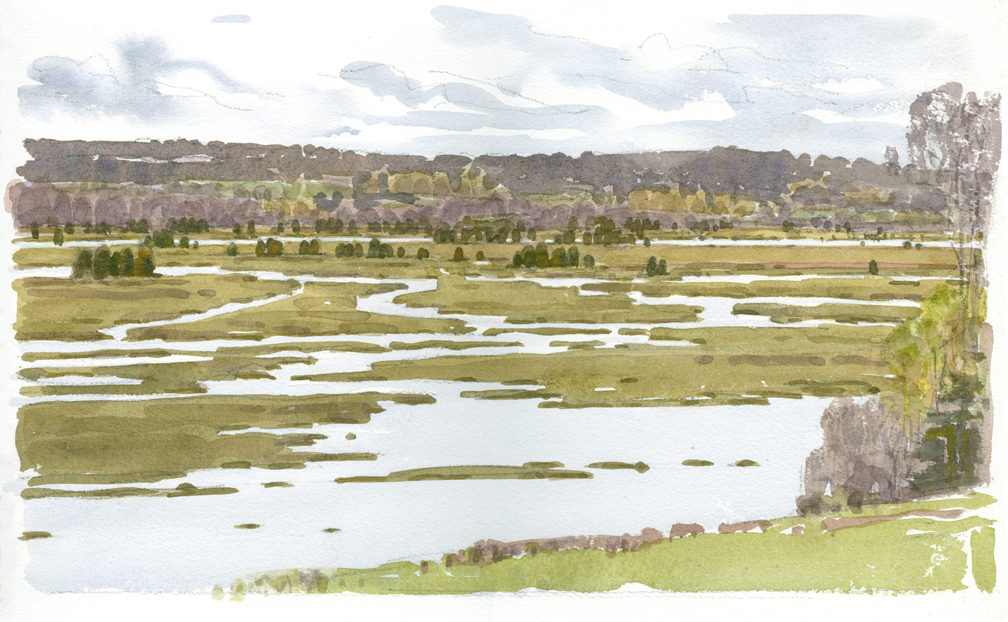 To finish the day, I explore the trails to the south of the visitor center.  Ferns, still in the form of fiddleheads, are poking up everywhere along the Woodland Loop.  A new trail on the Sanctuary leads to Hannah Eames Brook. 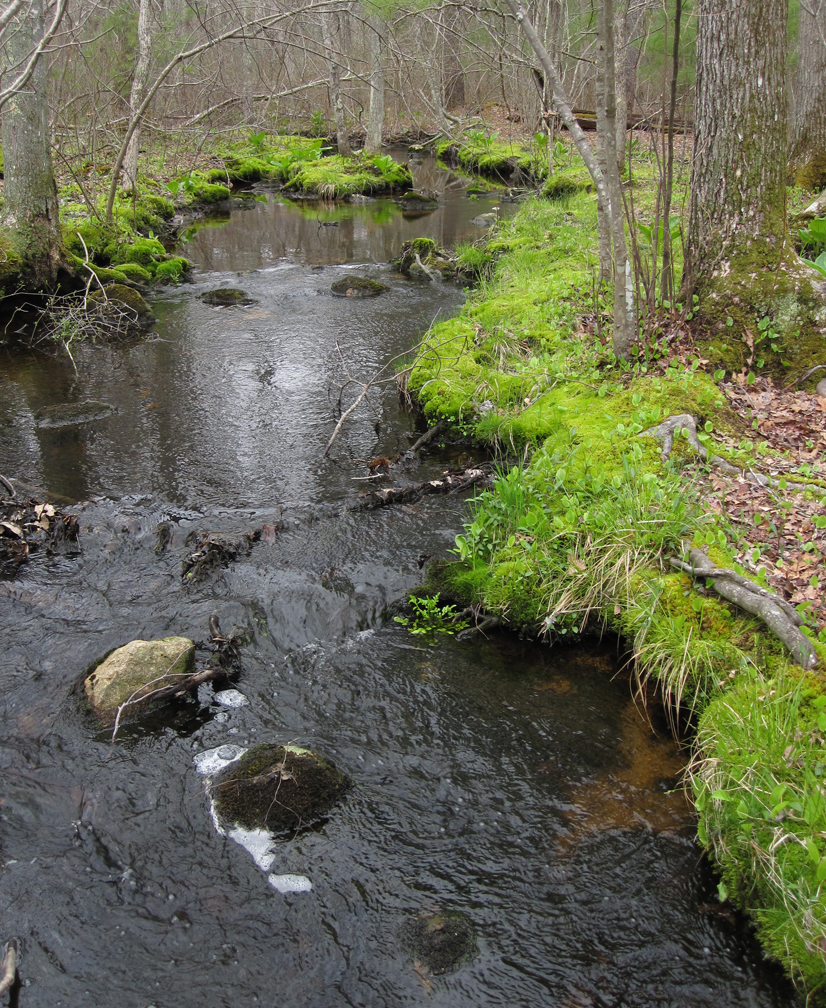 It’s a delightful, clearwater stream that tumbles between moss-covered banks spangled with wildflowers.  I pause to admire the delicate, lacy blossoms of dwarf ginseng. 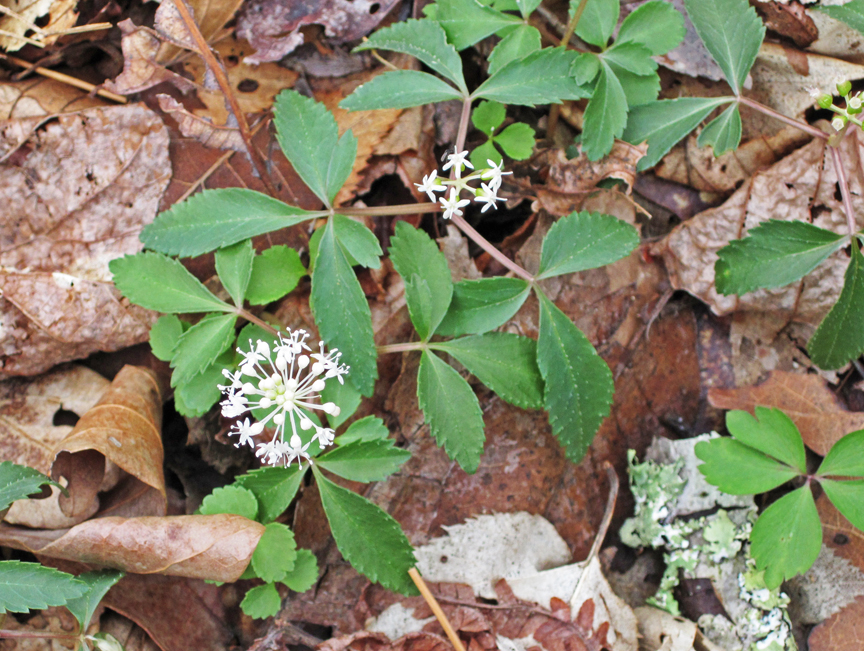 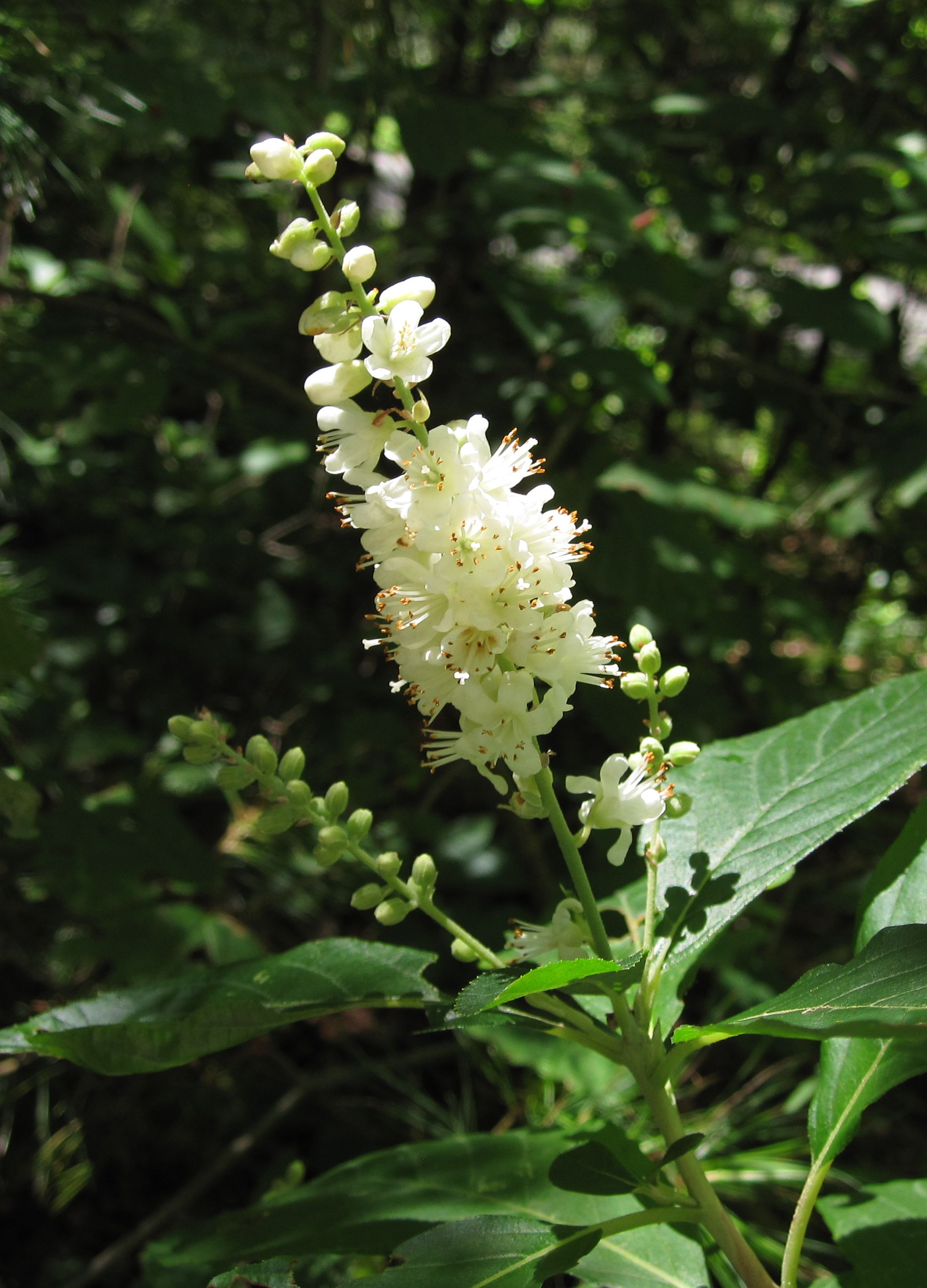 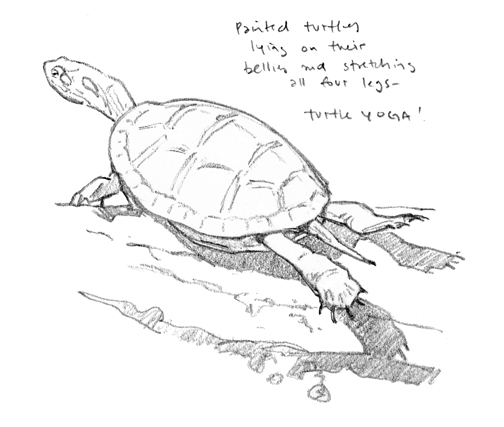 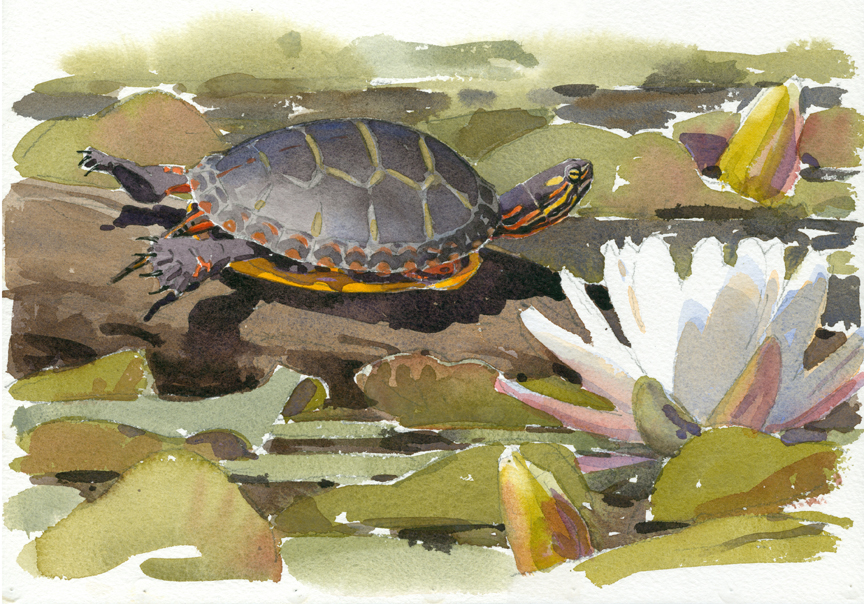 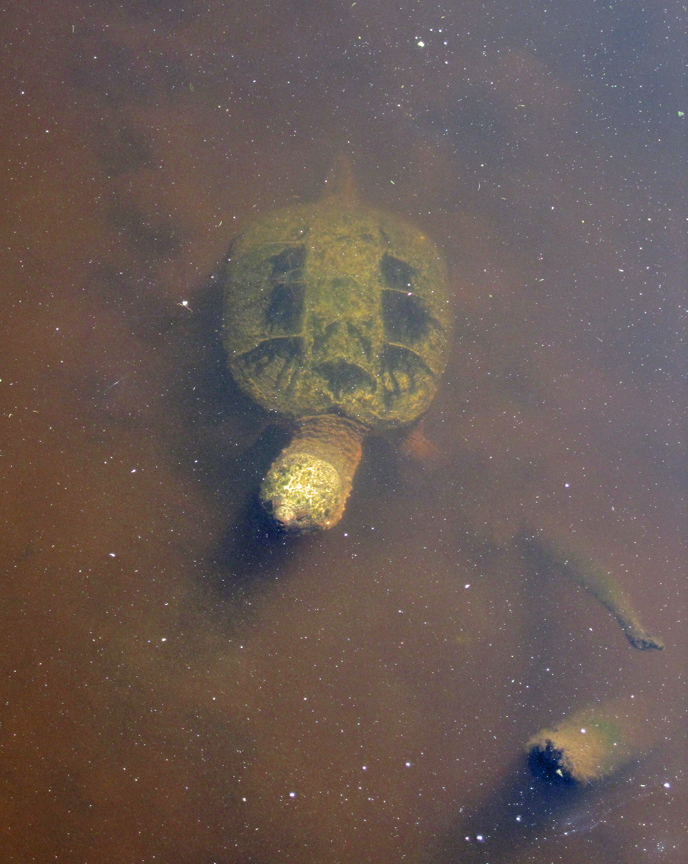 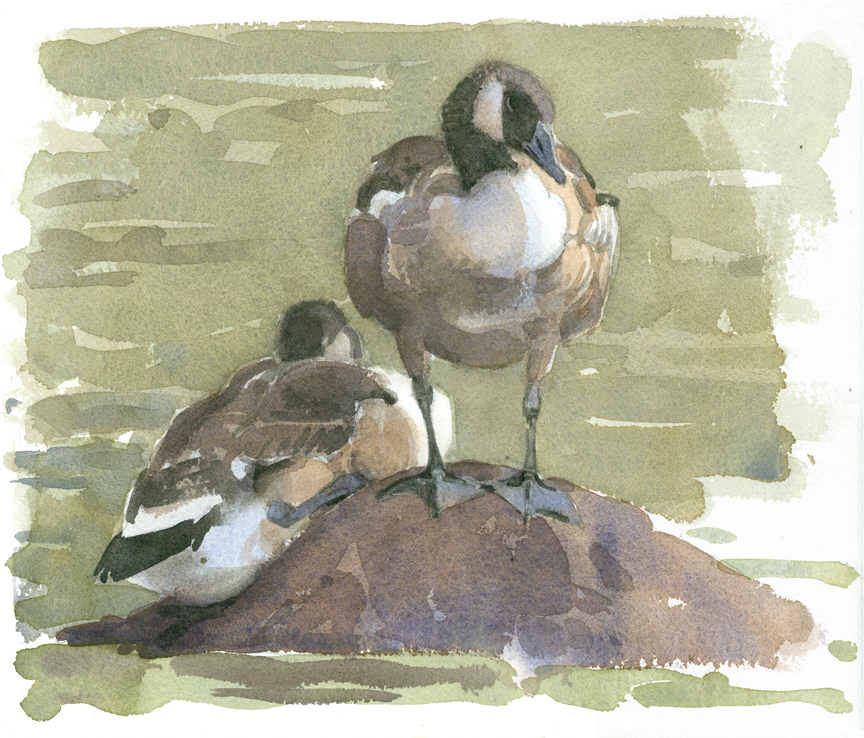 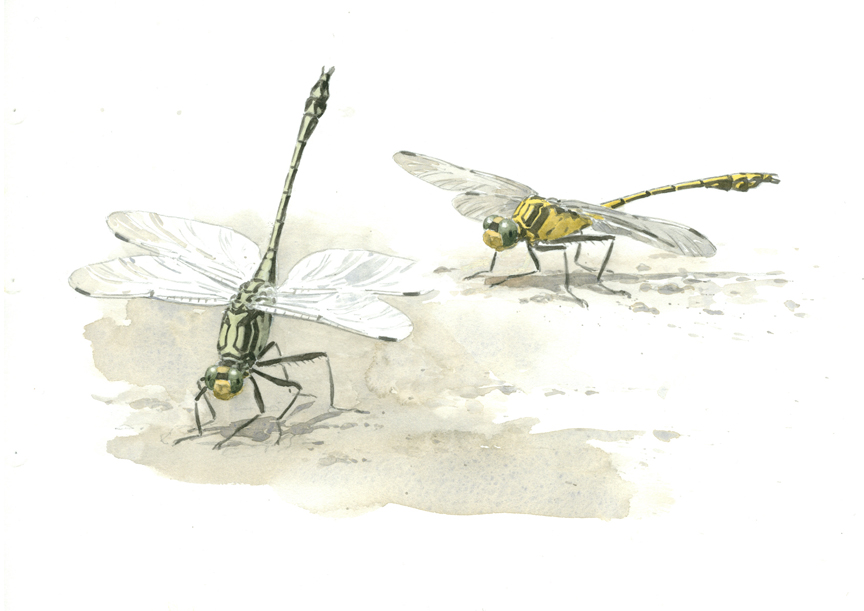