“The heron stands in water where the swamp
Has deepened to the blackness of a pool,
Or balances with one leg on a hump
Or marsh grass heaped above a muskrat hole.”
Theodore Roethke, “The Heron”

Barry just posted about a wonderful day he spent sketching and observing great blue herons at the Rocky Hill Wildlife Sanctuary in Groton, Massachusetts. Although they were once quite rare in the Eastern United States due to pollution and over hunting, great blue heron populations have rebounded and are now a common sight in Massachusetts. 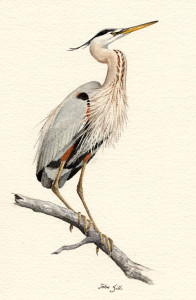 Nesting: Herons nest in rookeries, specifically in the tops of tall dead trees located in swampy habitat, which Barry captured in his watercolors. In Massachusetts, many rookeries are the result beaver dams that have flooded areas, creating swamps or small ponds, killing trees. Nests are made out of sticks that form platforms and are lined with leaves, moss, pine needles, and other leaf material. Check out the video below to learn more.

Feeding: Herons are one of the top predators in many aquatic ecosystems and play an extremely important role in the aquatic food web. Their diet consists primarily of fish, using their spear-like beak to pierce their prey and swallow it whole. In addition, herons will also hunt for frogs, salamanders, snakes, rodents, other small mammals, crustaceans like crabs, small birds, and other small animals.

Population declines in the 19th and 20th century: Their status as a top predator also made them extremely susceptible to widespread pollution and played a large role in their dramatic population declines in the early and mid 20th century. Because herons eat other aquatic predators, which eat plants rich with toxins, including by-products of now banned DDT and PCBS, herons would ingest large quantities of pollutants which had dramatic negative effects on their reproduction. This process is called bio-accumulation.

A few delightful comments on the great blue heron from the late 19th century:

How do great blue herons do in a Massachusetts winter:

“In such an event they (great blue heron) might survive the following winter if it should prove to be a mild one, while the stoutest heart among them would probably succumb to the rigors of a genuine ‘old-fashioned’ New England winter.” Walter Faxon, MCZ, Cambridge, Massachusetts

“The Great Blue Heron (Ardea herodias) is a bird that rarely favors us with his presence in the winter months. It may be worth while, then, to chronicle the capture of one in the Arnold Arboretum, West Roxbury, Mass., either December 31, 1889, or January 1, 1890. A tub of water stocked with minnows served to keep him alive for five or six days, when he suddenly died either from cold or the enervating effects of imprisonment.” Walter Faxon, MCZ, Cambridge, Massachusetts