The Death of a Warbler: A Tragedy in Four Chestnut-sided Parts 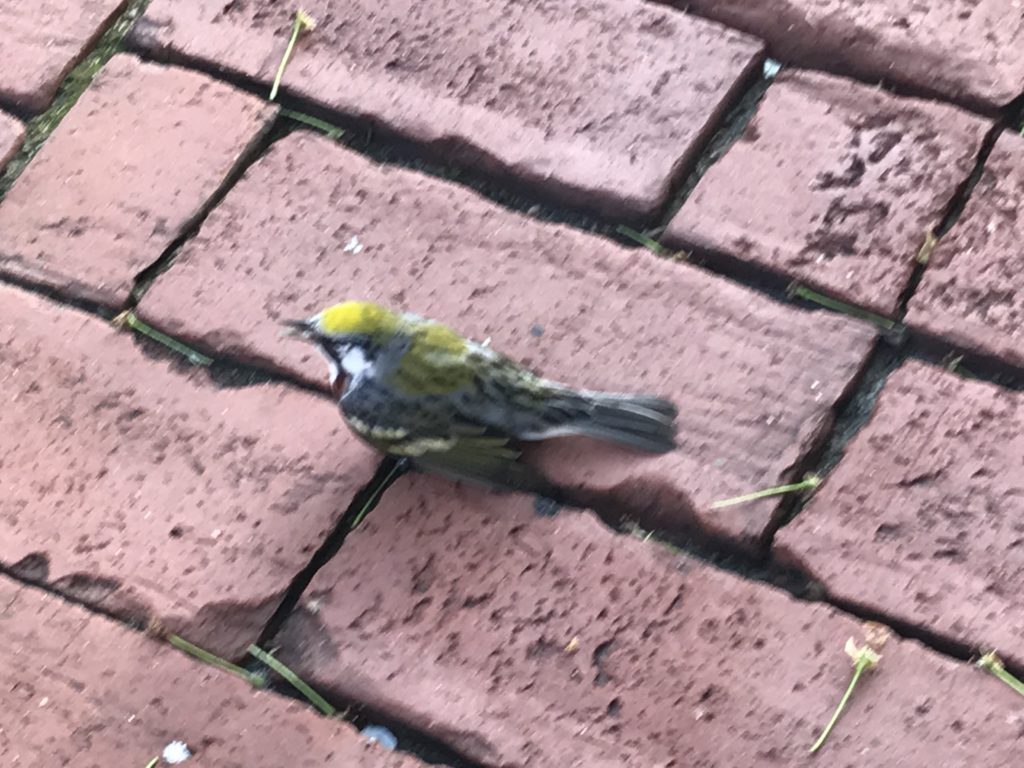 In addition to collecting data on bird-window collisions, Mass Audubon’s Avian Collision Team also generates many good stories that range from hopeful, to tragic, to simply strange. While most of the birds our volunteers found were dead, some were nursed back to health at the Tufts Wildlife Clinic. What follows is an account of one window-struck Chestnut-sided Warbler (Setophaga pensylvanica) that proved to be an emotional roller coaster for our project coordinators.

Part I: The warbler is alive

A dedicated ACT volunteer called up about a handful of window-struck birds outside a building facing the Boston Public Garden. Most were dead, but for a single Chestnut-sided Warbler. It was apparently sitting on the curb, visibly breathing, but injured. The volunteer was a little shaken up. Since they didn’t have a net or tools to safely catch the bird, I advised them to wait to see if the bird could fly off on its own before trying to catch it.

Part II: The warbler is dead

A few minutes later, the volunteer called back– sounding even more shaken. The bird had flown away, but just as it lifted off, it was caught in a gust of wind from a passing car and was struck by the fender. From the volunteer’s description, the bird was truly lifeless. The volunteer said they would take the carcass back to their freezer and eventually bring it to the Harvard zoology museum, where we had been depositing specimens for research.

“It’s alive!” were the first words out of the volunteer’s mouth on our third phone call within a half-hour. “The bag started moving!”

Stunned birds can truly appear lifeless, and in fact, many birds that hit windows are stunned, concussed, or go into shock before eventually shaking themselves off and flying away. But just because a bird can fly doesn’t mean it’s healthy. A broken clavicle or corocoid bone allows birds to make short flights, but prevents them from gaining altitude, halting their migration and making them an easy meal for predators. Any bird found stunned from a building impact is a good candidate for treatment at a wildlife care center.

The volunteer met Mass Audubon staff at a nearby T station to hand off the bird, which was taken to Tufts Wildlife Clinic.

The Tufts clinic graciously provides every animal with a case number, so its finder can call up to check on its condition.

While the bird was initially given an optimistic prognosis, we learned a few days after dropping it off that it had suffered untreatable head trauma. The bird had died.

While healthy bird populations naturally fluctuate enough to practically erase the effect of one birds’ death, there is no harm in trying to save individual lives. Naturally, most volunteers prefer to put in the extra effort involved in helping injured birds than leave them to die from an indirectly human-inflicted injury. It was sad not to be able to save this warbler, but we did successfully release a number of other birds, including Brown Creepers, Song Sparrows, Ovenbirds and Common Yellowthroats.

If you want to help monitor window collisions and ambulate injured birds, join Mass Audubon’s Avian Collision Team for its fall migration via this form!