“Whe-peet!” Hearing the explosive, snappy squeak of an Acadian Flycatcher at a Mass Audubon sanctuary would have been a huge surprise, were it not for the species’ ongoing shift northward into Massachusetts. Stumbling on this denizen of the American South used to be a downright rare occurrence here, but the northern edge of its summer range has advanced in fits and starts since the early 2000s.

When this particular bird was observed defending a territory at a sanctuary in Central Mass this summer, it was the first time it had been recorded as a likely breeder at a Mass Audubon property. Yet breaking the news in the Bird Conservation Department’s offices elicited mild enthusiasm and a hint of fatalism, with reactions ranging from “Cool!” to, “yeah, they’re comin’.”

Along with a few dozen other species, it seems this once-scarce visitor is on track to become a regular summer resident in a growing part of the state.

As Climate Changes, So Do Bird Ranges

Acadian Flycatchers are a naturally inconspicuous species, but other birds have made more dramatic entrances into Massachusetts. Red-bellied Woodpeckers are a loud, gaudy species of wet southeastern forests that have become downright common throughout southern New England. Northern Cardinals delighted birders in the middle of the 20th century as their brilliant reds and muted oranges became common sights in suburban yards and city parks.

All of these range shifts have been thoroughly documented by scientists as well as casual birders. The most comprehensive effort to document these changes is coordinated by the National Ecological Observatory Network (NEON). Mass Audubon is NEON’s partner for bird data in New England, and every summer, our staff contribute bird censuses to NEON from across the region.

NEON treats birds as one piece of a vast puzzle: by studying how long-term ecological trends line up with each other, the project aims to parse out the causes and consequences of environmental change. Read more about our work with NEON in this blog post!

The Role Of Ecological Monitoring

Range shifts represent more than a curiosity to ornithologists. Rather, they are part of larger ecological disruptions caused by a warming climate and other human-caused factors like agricultural intensification, urbanization, and invasive species.

While a few species adapt to these changes and even benefit from them, they do spell trouble in the grand scheme of things. Niches go unfilled as some species’ ranges shift away from habitats they were once well-adapted to, leaving their home ecosystems in flux.  Other species’ ranges are limited by physical factors like elevation, or by the distributions of their competitors or their food source. Birds with finely-tuned ecological roles struggle to adapt to changing conditions, most bird species’ populations decline.

Conservationists first establish which species are declining or adapting (and why, and how) in order to target habitats to create or manage and prioritize species for legal protection.

This leads to concrete action, like advocating for the state to list acutely declining species as Endangered, or creating young-forest habitat at wildlife sanctuaries– all pieces of planning for a future with brave new ecological realities.

This summer, I’ve been surveying birds at the Quabbin Reservoir for Mass Audubon and NEON, the National Ecological Observatory Network. The deep forests and hollows of the Quabbin watershed host scarce breeders like Cerulean and Canada Warbler, along with most common woodland breeders in the state. The Quabbin’s size and diversity of intact habitats make it an ideal study site for a program like NEON.

NEON is an exciting project because of its scale. Funded by the National Science Foundation, the network comprises more than 80 sites across the country’s 20 ecoregions. At each site, NEON coordinates teams of scientists to keep tabs on a variety of ecological indicators. These include large-scale factors like water chemistry, greenhouse gasses, and tree cover, as well as narrower topics like fish DNA, bird diversity, and disease prevalence in ticks, mice and mosquitoes. 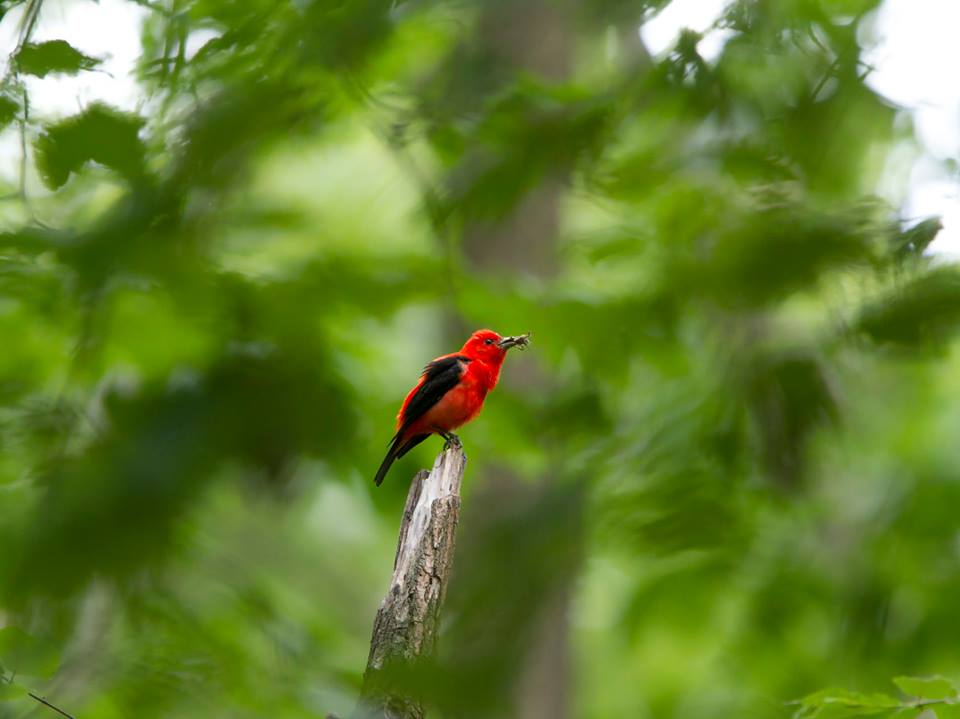 A Scarlet Tanager with insect prey, perched on a snag by the Quabbin. Photo by Will Freedberg.

NEON treats birds as one piece of a vast puzzle: by studying how long-term ecological trends line up with each other, the project aims to parse out the causes and consequences of environmental change.

Most importantly, all NEON data is free and publicly available. It’s fun to browse if you’re curious about any of these topics, but scientists can also leverage these massive datasets to answer specific questions about ecosystem function.

Mass Audubon has been responsible for NEON’s bird data in New England since the project’s inception. Each year, we send observers (called “field technicians”) to monitor bird numbers and diversity at the Quabbin, as well as Bartlett Forest in New Hampshire. 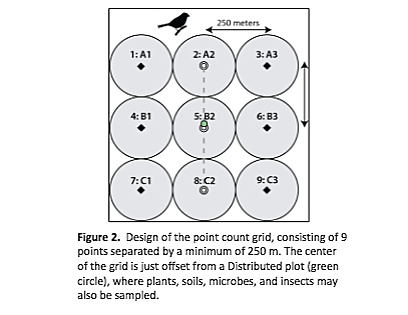 A diagram showing the layout of bird survey points in a NEON grid. Adapted from Thibault (2015)

Technicians are responsible for surveying a number of randomly selected patches of forest, which are each divided into 3×3 grids of survey points. By standing in one place and counting birds at each evenly spaced point in a grid, the technicians minimize double-counting birds, and get a representative subsample of birds present in each grid.

Even skilled birders won’t detect every bird at a point. To get around this, NEON scientists adjust bird count data with models that account for birds that were present, but undetected by the observer.

Observers are also less likely to detect birds that are far away from them, and more likely to notice birds that are close by. So, field technicians record their distance from each bird with a rangefinder; distant birds are given more “weight” in the model for calculating actual bird abundance. This is based on the assumption that the technician recorded most nearby birds, but missed more that were further away.

Next week, I’ll be posting some entries from my field notebook, and a typical day in the life of a Mass Audubon/NEON bird technician. Stay tuned for some stories from the field.