Warblers seemed to rain from the sky during Bird-a-thon 2020 after unusual weather doused Massachusetts in migrants. Birder participation more than doubled, too, but not because conditions predicted a massive influx of birds. Instead, it seems that more beginners were brought in by a family-friendly approach and a focus on birding from home.

As the sun rose on the Outer Cape on May 16th, thousands of birds gathered in the dunes after being blown in from the southwest and grounded by rain. The subsequent dawn flight became the subject of several expert articles, including an in-depth analysis of the conditions by ornithology professor Sean Williams. Some eBird checklists recorded over 100 Bay-breasted and Cape May Warblers, plus dozens of individuals of other uncommon migrants like White-crowned and Lincoln’s Sparrows.

Inland, the action was almost as good, with several Bird-a-thon-ers in dense suburbs and towns setting personal records for their yards. Nonstop north winds had held birds back for nearly two weeks, and when the wind finally turned southwest, restless migrants pushed ahead despite the storms. Nearly everything showed up at once; yard reports of Cerulean Warblers, Bay-breasted Warblers, and Bobolinks highlighted the strength of the previous night’s migration.

“Fallout” may be an overused term– but this was real

The word “fallout” often gets misapplied to any day with really good migration. In reality, even in the loosest sense, this word refers to exhausted migrants that land in adverse weather. In the strict sense, it describes a stream of migrants that are knocked down by fast-moving storms, landing en masse when they meet the edge of the weather front.

In this case, adverse weather formed well before nightfall, but the long-delayed migrants pushed ahead anyway—there was no “knockdown” effect from the edge of a front, but the wind and rain did exhaust many birds that were blown east into Massachusetts. So, yes, this was a fallout, loosely speaking—and a uniquely great birding day by any stretch of the imagination.

A normally competitive endeavor, this year’s Bird-a-thon focused on participation.The team cap was lifted, and new activities were made up to engage kids and non-bird enthusiasts in earning points for their team, like inventing silly bird names and creating bird art.  With a stay-at-home order driving a surge in interest in birding, it was important to welcome new enthusiasts to the fold– and avoid encouraging birders to tear across the state in search of rare species. Subsequently, Bird-a-thon attracted 1,600 participants this year, more than double the 750 who took part in 2019.

Donations were up, too

In total, Mass Audubon teams saw 242 unique species in Massachusetts. Teams were awarded points based on the number of unique bird species the team saw plus the number of nature-based activities team members completed. Drumlin Farm took first place with 992 points and a team of 230 participants (including 90 kids), earning the “Eagle Eye Award.” Second place, for the “Home Habitat Award” went to Wellfleet Bay with 537 points. The team from Ipswich River took home the award for the highest number of species seen: 206.

For a full recap of the incredible birding day participants shared, check out local birder and documentarian Shawn Carey’s video on the experience, complete with teammate interviews and great bird footage.

In a word: Genetics.

Bird names are not set in stone. Just ask the Rock Pigeon (formerly the Rock Dove). Depending on your birding experience, you may recognize other examples of species name changes: Thayer’s Gull to Iceland Gull, Rufous-sided Towhee to Eastern Towhee, and Northern Oriole to Baltimore Oriole. 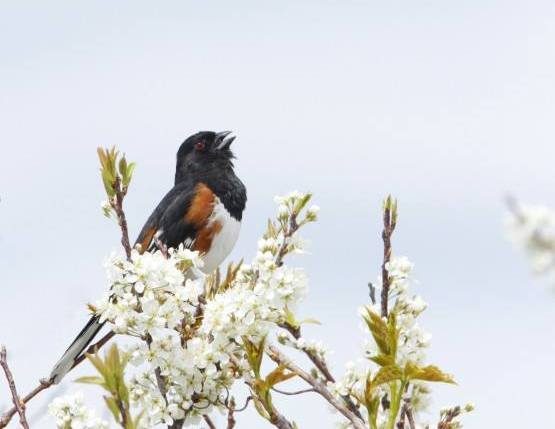 Eastern Towhee used to be considered a subspecies of Rufous-sided. (Photo by Will Freedberg)

Some names change once, only to change again. For instance, the Black Scoter was formerly the Common Scoter, and the American Scoter before that. Perhaps the most complicated name changes come from the splitting of one species into two or three different species. Traill’s Flycatcher, for example, became Willow Flycatcher and Alder Flycatcher.

Just to make sure everyone is thoroughly confused, the ordering of species on avian lists is fluid as well: falcons used to be found with the hawks before they were evicted from the group, and Snow Buntings, which were once found near the finches, are now cozied up with the warblers.

The Rhyme and Reason

While these changes may seem arbitrary or like part of a nefarious arrangement between field guide publishers and the ornithological establishment, neither is the case. There are science-based reasons for periodic changes in bird names and in the ordering of species on avian checklists. Until the 1990s, birds were grouped and classified solely by the way they looked and behaved. Today, it is the genetic makeup, or genome, of a species that is considered more important in determining its origins and its relationship to other living birds.

As genetic relationships become more fully understood, it sometimes turns out that two different-looking “species” are not genetically distinct, or that populations of another “species” are in fact distantly related.  These revisions to bird classification are the most common reason for renaming. For instance, genetic (and other) research has determined that Eastern Towhees and Spotted Towhees represent a distinct pair of species, while the Solitary Vireo has actually been proven to represent three species masquerading as one (Blue-headed Vireo, Plumbeous Vireo, and Cassin’s Vireo)!

The NACC regularly produces supplemental changes to the latest edition of the Check-list of North American Birds. These are responsible for the periodic name and sequence changes Bird-a-thon birders will see on the event’s official checklist.

Thank you to our Bird-a-thon sponsors!

May might seem like a long way off, but the Conservation Science department is already planning our team’s strategy for bird-a-thon. We’re also trying to build as big a team as possible for fundraising and birding, so consider joining us!

You can join us as a “Bird-a-thon booster” and help fundraise, or join as an official birder by emailing our team captain Margo.

Bird-a-thon is not only a fun birding event, but also a huge help to Mass Audubon. Our team uses donations from Bird-a-thon to support our conservation programs, like Foresters for the Birds and the Bobolink Project.

Last year, we tied for second place in the Hatheway Cup for most money raised— help us win it this year! A subgroup of our team will also attempt a big day on the 11th, and try to beat our team’s species total from last year.

Some of us get very serious about the competitive aspect of Bird-a-thon, much to everyone else’s amusement. Have you ever wanted to watch our program assistant Will try to hold it together after an all-nighter? Is Jeff, the woodland bird conservationist, willing to belly-crawl through tidal mud to glimpse a Least Bittern? Does lead ornithologist Jon Atwood get hangry if he misses a meal over a last-minute Wilson’s Warbler chase?

Of course, other participants are not obliged to go all-out, as some of us do—you can bird at your own pace, or join for just a few hours of the day! 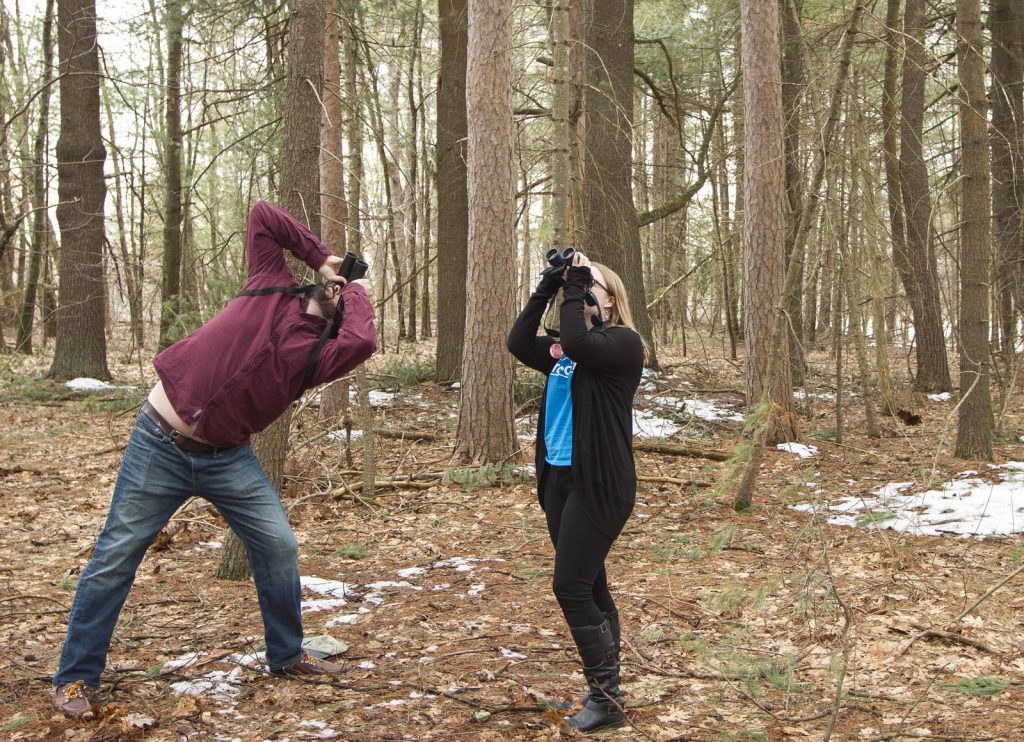 Jeff and Margo scouting sites for our team (photo: Will Freedberg)

Last year, the Conservation Science team recorded 179 species. Come out and see if you can help us beat our total.

Bird-a-thon, Mass Audubon’s largest annual fundraiser, features a 24-hour team birding competition where birders and team supporters raise money to support Mass Audubon programs and sanctuaries. What is it like to be a part of Mass Audubon’s Bird-a-thon? Michael Pappone, longtime member of the Bird Conservation team and Mass Audubon board member, shares his experiences from Bird-a-thon 2016:

“My team is up by 3:30 a.m. to gather well before dawn at the Bolton Flats Wildlife Management Area in Worcester County. The mist lurks around the cat-tails and willows. The Eastern Phoebe’s ‘vree-bee’ call rings out in the near distance (check!), and then the ‘oonk-a-dunk’ of the endangered American Bittern crouching somewhere out there in the wetness signals that it was time for another (check!) and that it is going to be a great day in the field. Then suddenly a Sandhill Crane floats by. Is he mistaking the Worcester County wetlands for Nebraska? Big (check!).

Bird-a-thon is in full swing! Behind us, a Scarlet Tanager let loose with his robin-with-a-sore-throat imitation. (Check!) At this rate our palms will be smarting from all the high-fiving before sunrise. Over at the sandy end of the Flats, another endangered fellow greets us from the heights of his very own 3-foot shrub sticking out of the sandy soil: a Grasshopper Sparrow, sounding very much like a grasshopper that just touched a high-voltage wire. With about 40 check marks on our list, we obey the law of diminishing marginal returns and split for new territory.

Next stop is Wachusett Mountain, where our ascent is rewarded with not only a good number of (checks!) but amazing numbers of Ovenbirds (teacher-Teacher-TEACHER!), Scarlet Tanagers, and Black-and-White (te-tsee te-Tsee-Te-TSEE) and Black-throated Green Warblers vocally squabbling over territory. The (non-check!) bonus is the sighting of a few remaining snow patches. Really good ‘gets’ here are the Yellow-bellied Sapsucker and Winter Wren. The last of the Dark-eyed Juncos has favored us with a delayed trip north just so we could be the team who gets to count him. Nice.

It’s on to the Quabbin Reservoir: a totally new venue for me out in Hampshire County. The reservoir was formed by a dam built in the Depression years from 1930-1939. The public works project flooded a number of communities to make way for 420 billion gallons of water and a new 181 miles of shoreline. It’s a big hit with the birds, that’s for sure. We revisit a number of previous species – in broad daylight this time; and notch a good number of new ticks on our checklist.” 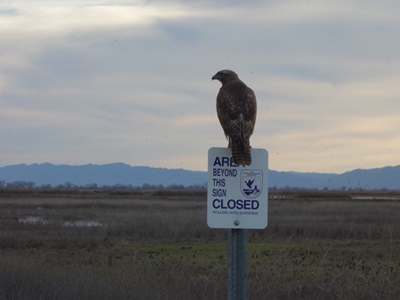 Join the Bird Conservation team as either a Booster or an Official Birder!