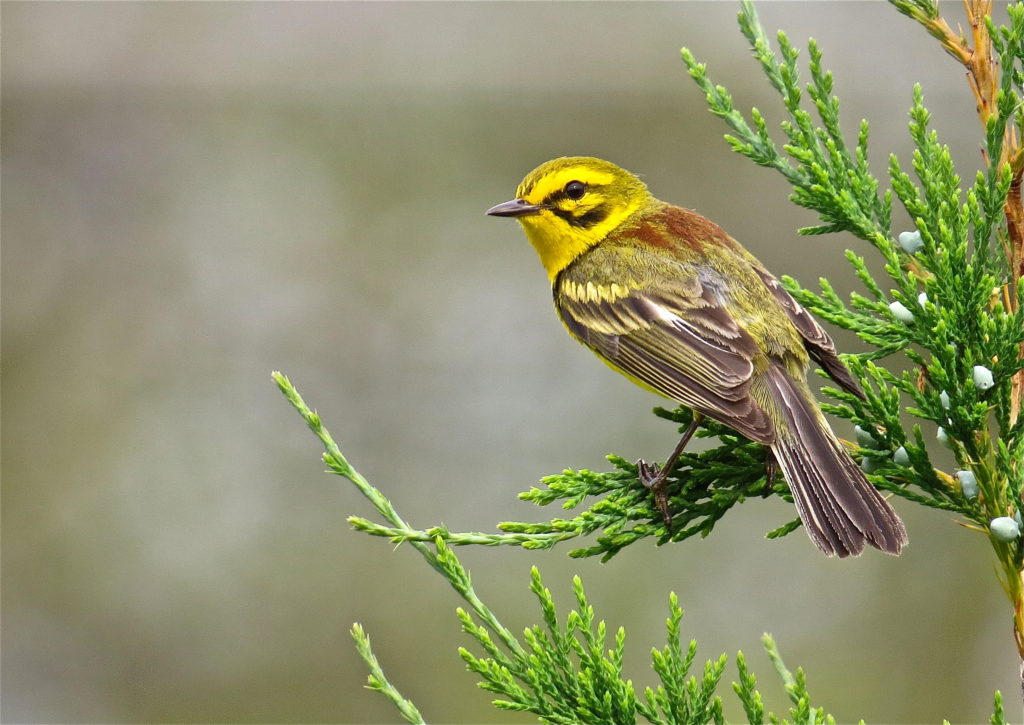 “The handsome little Prairie Warbler is remarkable only for its song. Dr. Elliott Coues likens this to the ‘plaint of a mouse with a toothache,’ because of its thin wiry quality.”—Edward Howe Forbush, 1929

Natives of more western states than Massachusetts might scoff at the scrubby clearings that we Easterners call “prairies,” but such areas provide perfect habitat for the Prairie Warbler. This species abhors forests, and breeds in shrubby clearings and only the most open woodlands. Both human-caused and natural disturbances have created plenty of Prairie Warbler breeding habitat in the Commonwealth over the past several centuries. However, as forests reassert themselves, Prairie Warblers stand to lose habitat as a result of this natural succession.

Though Forbush complimented the Prairie Warbler only on its song, our own Wayne Petersen, Director of Important Bird Areas, favors this “spectacled” warbler for both its song and its looks.

In addition, Wayne believes that the Prairie Warbler is a good “signature” bird for Massachusetts because we have some outstanding habitat for it on Cape Cod, in southeastern Massachusetts, and along many powerlines throughout the state.

The Prairie Warbler is what we refer to as a “whispering bird”, because it’s breeding footprint in Massachusetts (according to our Breeding Bird Atlas 2) is stable or increasing, but the Breeding Bird Survey is showing significant declines for the species in the state.

Male Prairie Warblers sing two different—though similar-sounding—songs during the breeding season. He sings one song, the faster of the two, to serenade his mate in courtship and strengthen their pair bond. The other, he sings to declare to other rivaling males that his territory is claimed.

Categories: Birds and Birding
Tags: birders meeting, birds, did you know, warbler of the week
previous post Check out the updated Bobolink Project website!
next post Who Was Edward Howe Forbush?