Last week, we posted an article on predicting bird movements with radar.  Here’s what we went over:

—How birds show up on Doppler radar as solid, expanding circles of radar interference around radar stations, and why this happens

This week, winds over Massachusetts are shifting. Steady southwest winds may bring a major influx of migrants as early as Tuesday night. So, here’s the rest of what you’ll need to know about watching birds on Doppler radar!

A Need For (Wind) Speed

it’s possible to see airborne objects’ speed relative to the ground using Doppler radar. Birds fly at about 10-15 knots, and know where they want to go. So, they’ll either be moving 10-15 knots faster than the wind if they’re flying in the same direction as the wind, or they’ll be moving in a different direction entirely. Other airborne objects, like insects or dust particles, will always move with the wind.

Here’s how to see the velocity for radar-detected objects online: 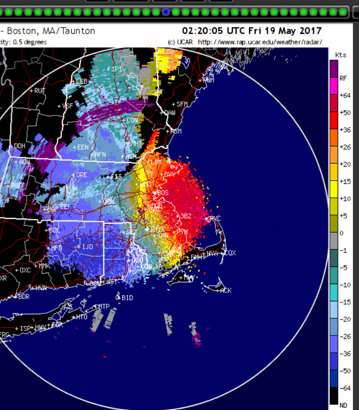 Image modified from the National Center for Atmospheric Research

The wind was about 20kts (knots) from the southwest when this image was taken.  Since this radar signal shows objects moving NE around 35kts, it’s clear they aren’t just drifting with the wind.  These are bona fide birds!

To check wind speed and direction in your area (to compare to clusters of airborne objects on radar maps), try using Wind Map. Just click to zoom, and hover your cursor over Massachusetts to see the wind speed.

Where Will Airborne Migrants Land?

Velocity data can also tell us where birds are going to end up.  Birds usually migrate for between 5-7.5 hours a night, so multiplying their airspeed by around 6 gives us a very rough approximation of how far they’ll travel in one night. On most nights, this works out to be around 150-200 miles. This means that you can often get a general sense of how good the birding will be in Eastern MA based on early-evening images from Southern CT and New York.

For example, when there’s a big early-evening movement of birds over OKX (the radar station for Southern Connecticut and Long Island) and the radar velocity data show birds moving to the east or northeast, chances are that birding will be good in Eastern MA the following morning. If migrants are moving steadily due north, however, that can be a good sign to head further inland the next day.  Of course, it’s always best to check early-morning radar images as well—on some nights with north winds, migrants will pour in from the Atlantic Ocean right before dawn, making for great coastal birding.

In our next post, we’ll discuss radar images from the night before the best day of spring migration in 2017. It should serve as a case study in how watching the weather and radar can lead to encounters with incredible concentrations of migratory songbirds. Stay tuned!