Every year, at about this time, dedicated hawk watchers and serious raptor aficionados begin paying particular attention to radar images and weather prognostications on the evening news. Indeed, some devotees even regularly take their vacation in the middle of September. So what’s so special about mid-September? To those in the know with an interest in hawk migration, mid-September is THE time to intercept the peak southward departure of the Broad-winged Hawk (Buteo platypterus). 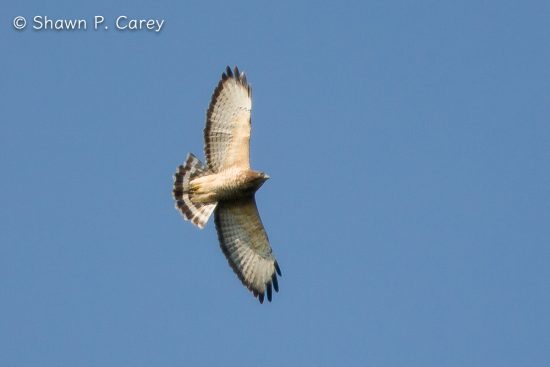 Adult Broad-winged Hawks are 15 inches-long with a 24 inch wing-spread, a black tail crossed midway with a single wide, white band, a brown back, and rusty-brown underparts.  In flight they are compact, with broad wings that are pale underneath and traced with a thin black border around the edges (as shown in the above photo). Ranging throughout most of the eastern United States and southern Canada west to Alberta, Broad-wings spend much of their summer hunting amphibians, snakes, small mammals, and birds to feed their young.  However in mid-September it is the spectacular autumn migration of this species that annually captivates and mesmerizes hawk watchers, and often even the general public as well.

Unlike other raptors (or most other species of birds for that matter) few have such a telescoped seasonal departure as the Broad-winged Hawk. With seemingly mathematical precision, much of the North American breeding population typically initiates its southward migration sometime between September12–20.  Depending upon weather conditions, in some years this time window becomes even more compressed, occasionally with many thousands of individuals passing favored observation sites literally within a few hours. Here in Massachusetts, Wachusett Mountain in Princeton, Mt. Watatic in Ashburnham, and Mt. Tom in Holyoke are among the better places to witness this phenomenon.

In mid-September Broad-wings across much of their breeding range wait strategically for the passage of cold fronts accompanied by falling temperatures and light winds from the north side of the compass to begin their migration.  Under such conditions the hawks almost simultaneously begin lifting up from the summer woodlands where they nested to search for rising warm air masses called thermals that will help eventually transport them to South America for the winter.

Using such thermals to carry them skyward many thousands of feet, eventually the Broad-wings break out of the thermals and travel to another thermal, often several miles away, by means of long, high-speed power glides that cause them to gradually lose altitude at the same time.  Once they reach another thermal, they then ride the new “escalator” skyward. Because hundreds of Broad-wings are using this same strategy, on a good day for migration, a large thermal often contains many hundreds of tightly soaring individuals all rising upwards at the same time.  In hawk parlance such an aggregation is called a “kettle” (shown below). 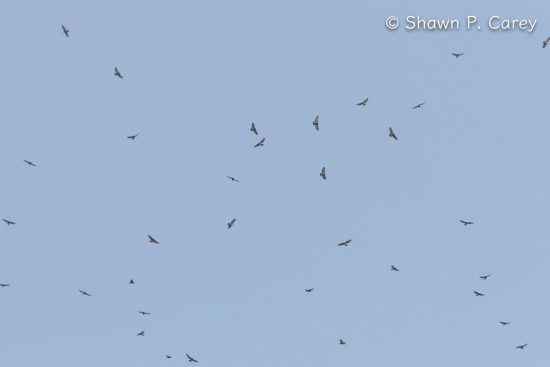 On days favorable for migration, many thousands of Broad-winged Hawks make their way southward at the same time using this combination of riding warm air thermals upward for lift, and then power gliding to another thermal so they can regularly cover hundreds of miles a day under ideal conditions. The migration tends to follow the southwesterly leading line created by the Appalachian Mountains. Between the thermal-and-glide strategy, and wind lift created along Appalachian ridgetops, the hawks gradually make their way to the Gulf Coast, where they gradually “turn the corner” in southern Texas to avoid crossing the Gulf of Mexico, and then make their way into Mexico and south through Central America, and finally into northern South American where most will spend the winter.

Not surprisingly there are variations in this strategy along the way, including several world-famous hawk-watching bottlenecks where, with several other species, they pass through Mexico, Costa Rica, and Panama.  While this is by no means the full story, it is the essence of how each year this magnificent raptor accomplishes one of the most amazing autumn migrations in the western hemisphere.