As the Bobolinks begin to arrive in New England fields, we are busily finalizing contracts with farmers participating in The Bobolink Project. Thanks to the generosity of Bobolink Project supporters, we raised enough money to protect over 500 acres of farmland in New England this summer! This money will allow farmers to adjust their haying schedule for the benefit of grassland nesting birds. 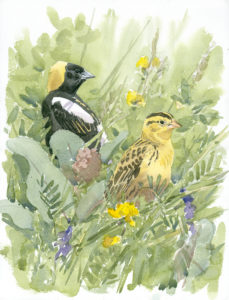 Bobolink Pair at Drumlin Farm, watercolor by Barry Van Dusen, artist in residence for the Museum of American Bird Art at Mass Audubon, 2015-2017.

This year the project was so appealing to local farmers that we had more acres offered by interested farmers than we could afford to protect. Sixteen farms are expected to be enrolled in the project this year, located in Vermont, Massachusetts and New York State.

This is the first year The Bobolink Project has been collaboratively coordinated by Mass Audubon Bird Conservation staff with Audubon Vermont and Audubon Connecticut. Read more about the Project’s history and recent administrative transition here.

Last year it is estimated that over 500 baby Bobolinks fledged from 500 acres of protected farm land enrolled in the project. Protected fields were also home to other species of declining grassland birds including Eastern Meadowlarks, Savannah Sparrows and Northern Harriers.

We look forward to welcoming grassland birds to fields enrolled in the program this summer and sharing our results with you. Keep up to date with The Bobolink Project by signing up to the mail-list or follow us on facebook.

It is not too late to help declining grassland bird species, if you donate now your money will go towards helping farmers and grassland birds in the summer of 2017.

The Bobolink Project In the News

The project received some great press in the lead up to the breeding season, airing on Vermont’s  WCAX’s “Across the Fence“. Articles also appeared in Vermont’s Rutland Herald and Times Argus and a recent WCAX story featured one of our landowners from 2015! Check out the video.

The Project was publicized at the Connecticut Ornithological Association’s Annual Meeting in Middletown CT, and the Mass Audubon Birders Meeting in Boston MA, and also featured on an episode of Ray Brown’s Talkin’ Birds radio show. 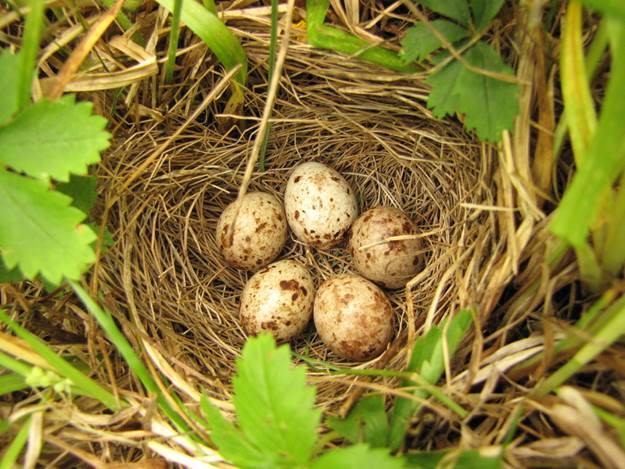 2 thoughts on “Success for The Bobolink Project”