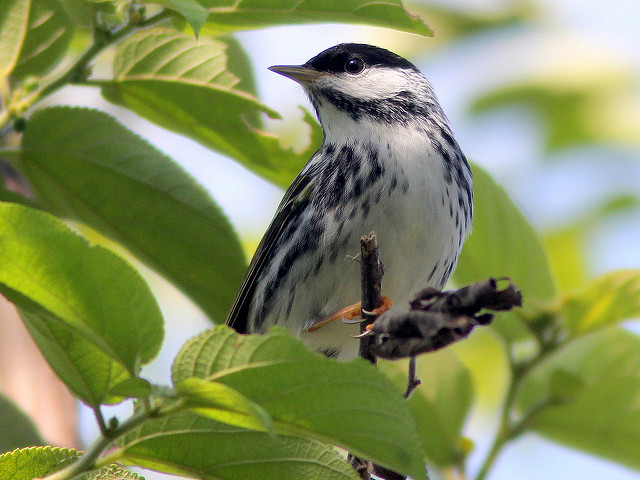 “Its activity is pleasing, but its notes have no title to be called a song. They are shrill, and resemble the noise made by striking two small pebbles together, more than any other sound that I know.” – John James Audubon, Birds of America

The Blackpoll Warbler is a very common migrant in Massachusetts, and it is often located by its high-frequency song as it passes through the state. The sound is so high that many birders claim that being unable to hear the Blackpoll Warbler’s song is one of the first signs of hearing loss. From June through August, however, there are precious few places in the Commonwealth where even observers with the keenest hearing can hope to hear a Blackpoll Warbler sing. Given that we are on the extreme southern edge of this species’ breeding range, it is not surprising that breeding pairs of this subalpine specialist are few and far between in the Bay State. Mount Greylock is most likely place to see a breeding Blackpoll Warbler in Massachusetts.

During migration the Blackpoll Warbler—weighing in at just 12 grams (lighter than a soda can)—flies for three straight days over the Atlantic Ocean before stopping in Colombia or Venezuela. In addition, Blackpoll Warblers that breed on the northwest coast of the U.S. first fly across the continent to join up with their eastern counterparts before flying south. This is one of the most impressive migrations of any animal.