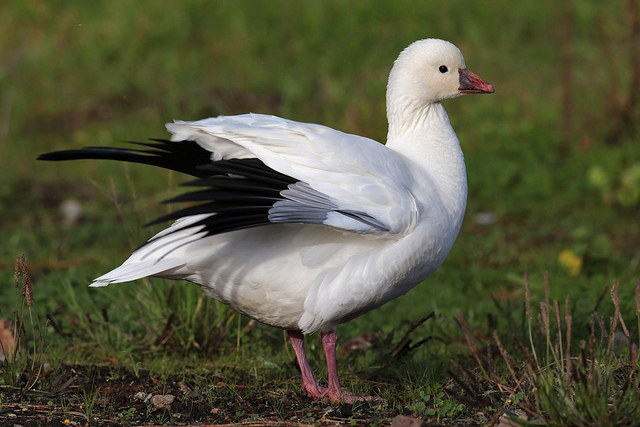 The last issue of The Warbler provided a brief history of the venerable Christmas Bird Count (CBC) – a scheme established in 1900 to monitor winter bird populations during a three-week period around Christmas.  This issue offers a few Massachusetts highlights from the 2016-2017 CBC season.  In checklist order, waterfowl made a big splash this winter with rarities such as Pink-footed Goose, Greater White-fronted Goose, Ross’s Goose, and Cackling Goose variously honking things up on several counts, along with some mega-numbers like 17,629 Black Scoters on the Truro CBC, 33,054 Long-tailed Ducks at Nantucket, and a state-wide total of 2,231 Hooded Mergansers.  Several “chickens” continued a downward trend with only 13 Northern Bobwhites tallied on one count, and a state-wide total of 12 Ruffed Grouse on only 6 CBCs.  Compare these figures with the state total of 2,273 Wild Turkeys!

Vultures continued maintained a northward shift in winter numbers (possibly a climate change signal) with a total of 19 Black Vultures noted on just two counts, and 133 Turkey Vultures on 8 CBCs.  A rare-in-winter Osprey appeared in Truro, and state-wide, 219 Cooper’s Hawks maintained their seasonal dominance over the 138 recorded Sharp-shinned Hawks.  In the unobtrusive category, a Yellow Rail recorded at Nantucket was most unusual, and a total of 255 Lesser Black-backed Gulls on that same island speaks to how rapidly this Old World species is moving into North America.

A heavy fall flight of Northern Saw-whet Owls was no doubt responsible for tallies of 45 Saw-whets on the Concord CBC and 30 in Truro.  Two White-winged Doves in Boston’s Victory Gardens and a hardy Rufous Hummingbird on the Buzzards Bay CBC were unique this CBC season. Falcons reflected varying success, with the beleaguered American Kestrel state total of only 13 individuals continuing a disappointing downward trend, while cumulative totals of 37 Merlins and 34 Peregrine Falcons can only be described as optimistic.

Several bona fide rarities included an Ash-throated Flycatcher on the Mid-Cape Cod CBC, a Sedge Wren at Buzzards Bay, and a Townsend’s Solitaire at Cape Ann.  And for any readers who think that American Robins are only harbingers of spring, consider a total of 35,125 robins on the Mid-Cape CBC and the state-wide total of 53,300!

Late lingering can only explain the occurrence of an Ovenbird, a Northern Waterthrush, and a Black-throated Green Warbler at three different localities.

While this summary speaks only to some of the highlights gleaned from this season’s CBC, full details and more information will soon be available at the CBC website.