The Drumlin Bee School recently completed its ongoing five week series program and graduated 38 students as new beekeepers. The Drumlin Farm beekeeping series programs teach students everything they need to know about starting and maintaining bee hives at home. Mel Gadd, recently awarded Massachusetts’ Beekeeper Association’s 2017 Beekeeper of the Year, has been leading Drumlin Farm Students and teaching them this rewarding hobby for many years. 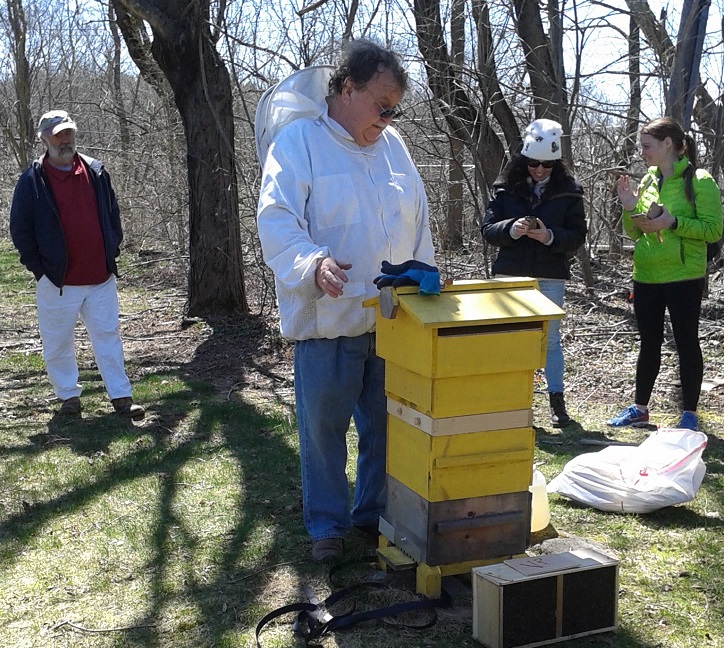 The students recently visited some of the hives on the Mass Audubon Headquarters site and practiced installing new bees into two of the hives. Having a healthy population of bees is important for a healthy habitat as they provide many ecological services, most notably in the pollination of flowers and plants. Drumlin Farm, as well as the Mass Audubon Headquarters site across the street, hosts many hives in our fields and forest edges to encourage bee populations and teach program participants about these fascinating insects and their care. 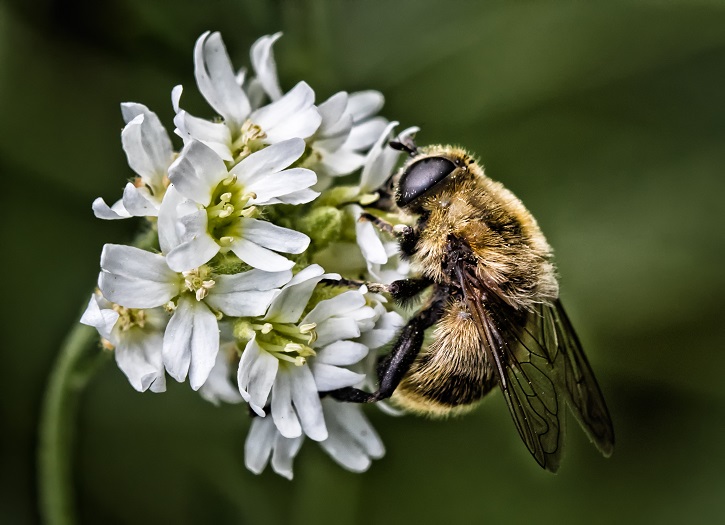 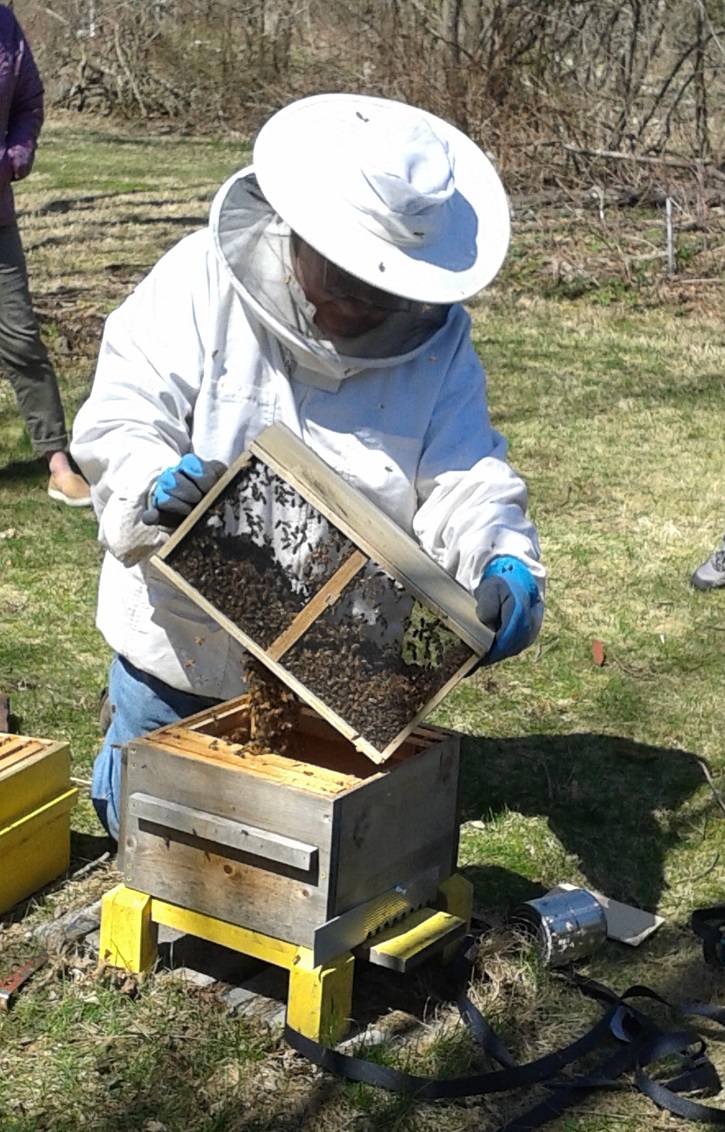 Suited up, Mel fills the hives with new bees. 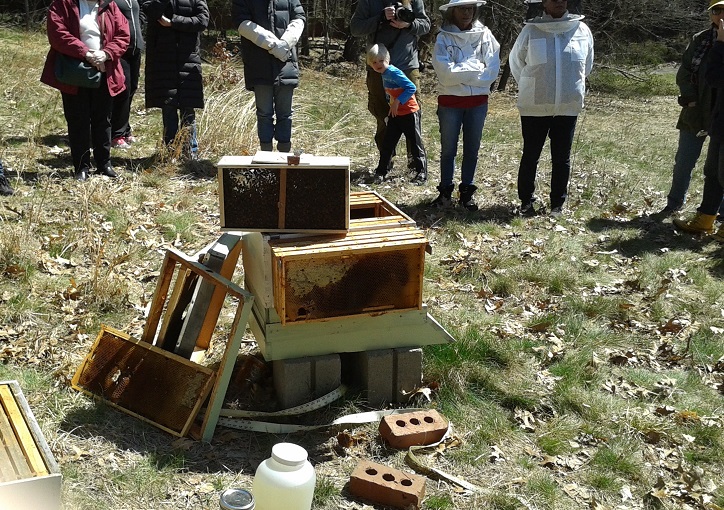 There are many layers and parts within the artificial hives.

Beekeeping for Beginners graduates have the opportunity to advance their skills even further with Intermediate Beekeeping classes but there are many ways visitors can connect with these busy insects and the honey they provide. Children will love our Queen Bee, Honey Bunny, and Apple Honey Harvest programs, as well as the opportunity to focus on the Power of Pollen at Mini Camp. Adults can also have a merry time learning the ancient methods used in making mead, an ancient wine made from honey!

Knock on wood, but we think it’s safe to say no more nor-easters for this season. Celebrate the warmer weather with some good ole fashion time outdoors. April at Drumlin Farm is filled with excited newborns to visit, special events, engaging programs, and more. 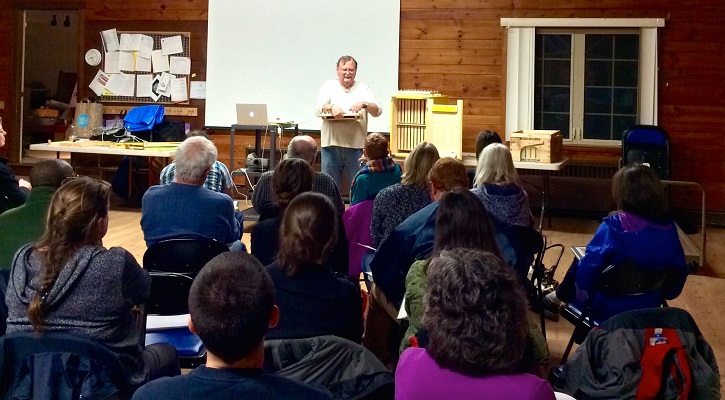 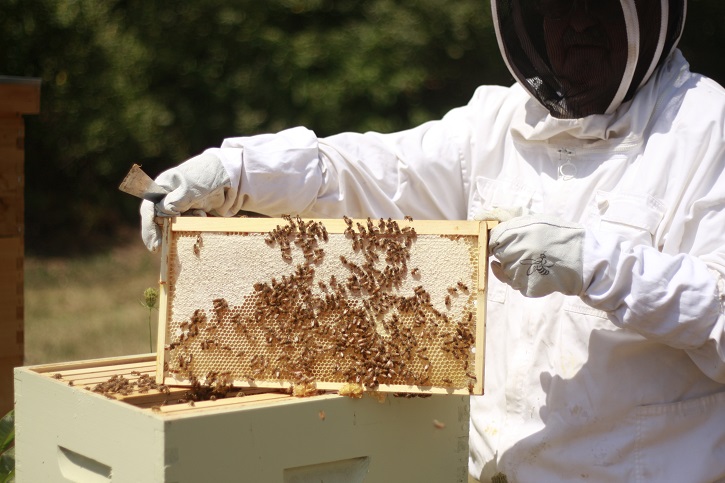 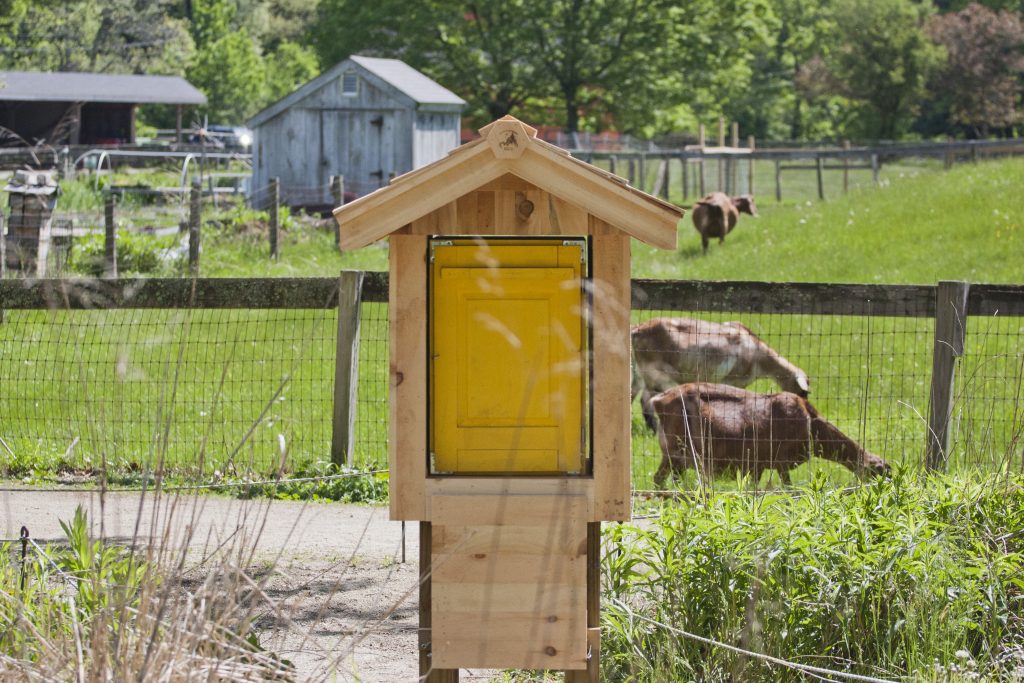 Last year, we had 10 hives at 208 South Great Road: Eight on the Drumlin Farm side of the road, and two on the Mass Audubon Headquarters side.

Since last summer, we’ve lost five hives. Considering last year’s drought and the subsequent lack of blossoming plants by the end of the summer, our losses were less than the average in the New England region.

This season we have increased the total number of hives to 14. There are now 10 hives at Drumlin Farm and four at Mass Audubon Headquarters. 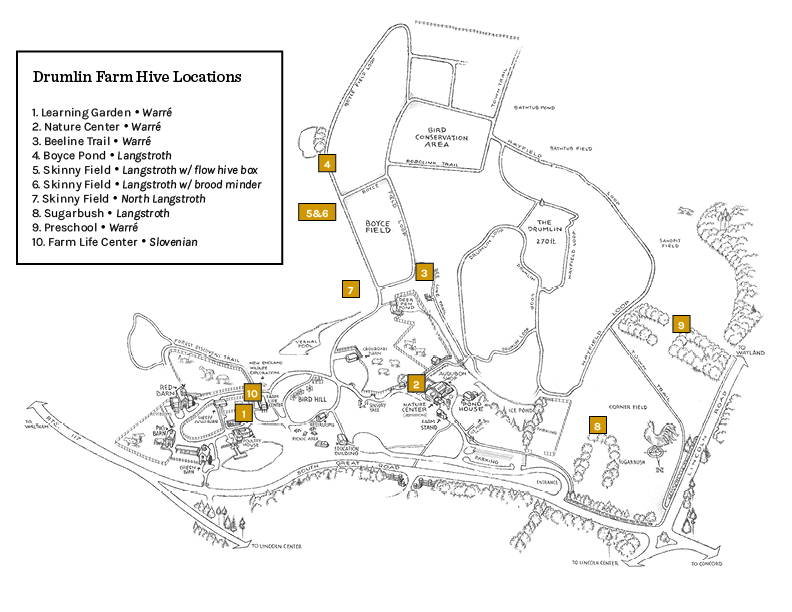 1. Learning Garden Hive (Warré): This hive is slowly building up its numbers. The bees have been active on the few warm days that we have had.

2. Nature Center (Warré): In early May, we installed a new package of bees in this hive and the numbers have been increasing steadily. The queen is doing her job. As with the other hives, the bees have been very active on warm days. Once the clover in the sheep pasture blooms, we hope this hive will take off as it did two years ago with the heavy load of pollen and nectar from the clover.

3. Beeline Trail (Warré): Both of these hives were lost last fall and the hives were removed. The Warré hive is back although it has been moved slightly to take into account groundwater issues. Bees were installed in early May and the hive appears to be doing well.

4. Boyce Pond Hive (Langstroth): We thought this hive was lost over the winter, but upon closer inspection it appears to have survived. We recently cleared some of the brush and growth around the hive to make it more visible and give the bees better access.

5 & 6. Skinny Field Hives (Langstroth)*: Both of these hives are doing very well—full of bees with good levels of honey stores.

7. Skinny Field Hive (Langstroth): The Langstroth hive that had been at the Beeline Trail was moved here, and bees were added in May. The hive is doing well and already required a second brood box as it has been expanding steadily despite the cool weather.

8. Sugarbush Field Hive (Langstroth): This is not a strong hive at this point. Hopefully, as the weather warms the hive will improve. If it does not, we may be able to add bees from some of the stronger hives. The other option could be to add a swarm, if available, to build up the number of bees quickly.

9. Drumlin Community Preschool Hive (Warré): This hive has been running for five years and is doing extremely well. The hive will need an additional box soon to forestall crowding, which leads to swarming. Since it’s a Warré hive with windows, the preschool children are able to look inside and see what’s happening.

10. Farm Life Center Hive (Slovenian): This Slovenian hive, installed in a traditional kiosk structure, is the newest addition to our hive collection. Bees were recently installed, and once they have been established we will teach staff about the hive. The bees are behind interior screening so visitors can be shown the operation of the hive.

We look forward to a good beekeeping year this season. Long-term weather projections for the summer indicate more precipitation and fewer high temperature days (above 90°F) then we had last summer. Hopefully, this will insure a sufficient amount of pollen and nectar sources for the bees as well as a better season for the output at the farm. We plan to start documenting the impact of the beehives on the output and success of the farm crops this coming year.

If you have questions about any information in this update, or anything bee related, feel free to contact Mel.

One of these hives has an experimental Flow Hive box on it. The flow hive box system, developed in Australia, allows for capturing honey directly from the box without having to open and disrupt the hive. I did not attempt to capture honey from the flow hive box last season, as the box was added late in the season and drought limited the availability of nectar. The flow hive box has a window that allows you to see the plastic flow hive frames and sometimes the bees.

The other hive has an electronic monitoring device, Brood Minder, which will record hourly temperature and humidity levels within the hive. The information can be directly uploaded and used to assess hive maintenance and also is transmitted to a national database tracking the health of bee hives across the country.