Looking at rainfall totals across the state from Sunday night’s storm, Lincoln was the winner with just over two inches! Not realizing just how much rain we got, we went out to the fields Monday morning hoping to transplant the second succession of tomatoes. However, we found standing water in the middle of some fields which made it too boggy to drive on with the tractor and transplanter. We satisfied ourselves pre-harvesting peas for Tuesday’s restaurant orders and catching up on some weeding. The Farm Ecologist camp group  joined us in pulling weeds from around the new strawberry plants, which they had fun with.

Before that heavy rain, generally dry and warm conditions had favored the strawberry crop. Now we will see a decline in quantities of berries, but this week will be the peak of pea season. We are now harvesting sugar snap, shelling and snow peas, so keep an eye out for them at the stand and in your CSA share. This past Wednesday was the first distribution of the summer CSA, but it’s not too late to join! If you’re interested in registering for the CSA after it’s began, you can email our CSA Coordinator Veronica Gassert at [email protected] for a pro-rated share, the summer CSA includes bountiful pickups every week until September 5.

For the first time at Drumlin Farm, half-shares are available on a weekly basis as well, so if the fear of receiving too much food has prevented you from joining in the past, we have a great solution just for you. Carrots, beets, basil, peas, chard, garlic scapes, and spinach are some of the crops we plan to harvest for this week’s share. Scapes—the flower stalks of garlic—are, to this farmer’s mind, the greatest allium on earth. They are mild in flavor compared to garlic cloves, and have the consistency of firm pasta when cooked. If you cut it the right length, you have forest green penne. Delicious! 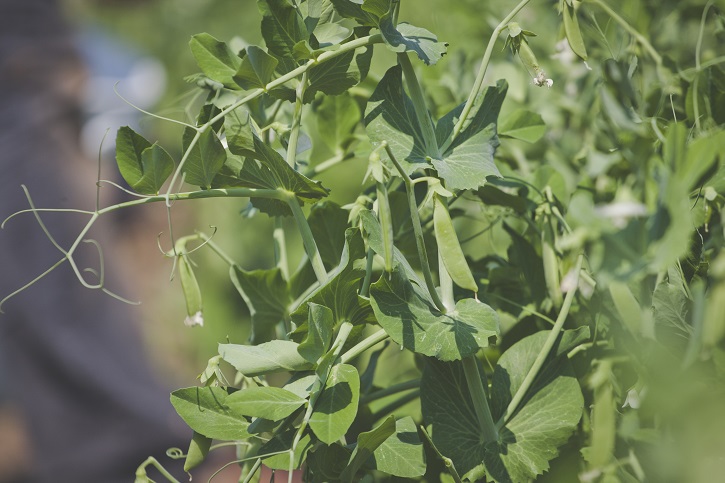 Last week, we placed straw mulch around the first succession of tomatoes. The straw suppresses weeds, insulates the soil from drying out, and prevents mud from splashing up onto the plants during heavy rain which helps reduce instances of disease. When we plow the straw into the field in the fall, it adds organic matter to the soil—the key to holding water. Over the past two days, Sarah, Veronica and Andrew ran the first line of twine along the rows. In about four weeks, we’ll have placed another four lines of twine and reached the top of the stakes. Hopefully we’ll begin harvesting lots of tomatoes around that time.

This past Thursday, we got help weeding onions and planting leeks from Athena Capital volunteers and from a surprise group of volunteers from the media company Nielsen—the more the merrier for those two labor-intensive jobs! On Tuesday, biostatisticians from Waltham’s LLX Solutions helped us plant the third and final round of sweet corn. Thanks, all, for pitching in and supporting the farm’s work.