The short answer: they don’t.

Seabirds drink ocean water, and excrete the excess salt that would otherwise leave them dehydrated. Specialized glands, located above the beak and just under the eyes, filter salt ions from seabirds’ bloodstream. The glands also draw out just enough water to dissolve salt into a highly concentrated saline solution, which runs out through the bird’s nostrils.

If you’ve ever seen a gull standing on dry land, with fluid dripping down the tip of its beak… that’s because it’s expelling salt!

These glands can atrophy and stop working if not regularly used. Seabirds at zoos and wildlife rehabilitation clinics actually need to be kept in saltwater—if their glands stop pumping, the birds can experience salt poisoning when re-exposed to ocean water. 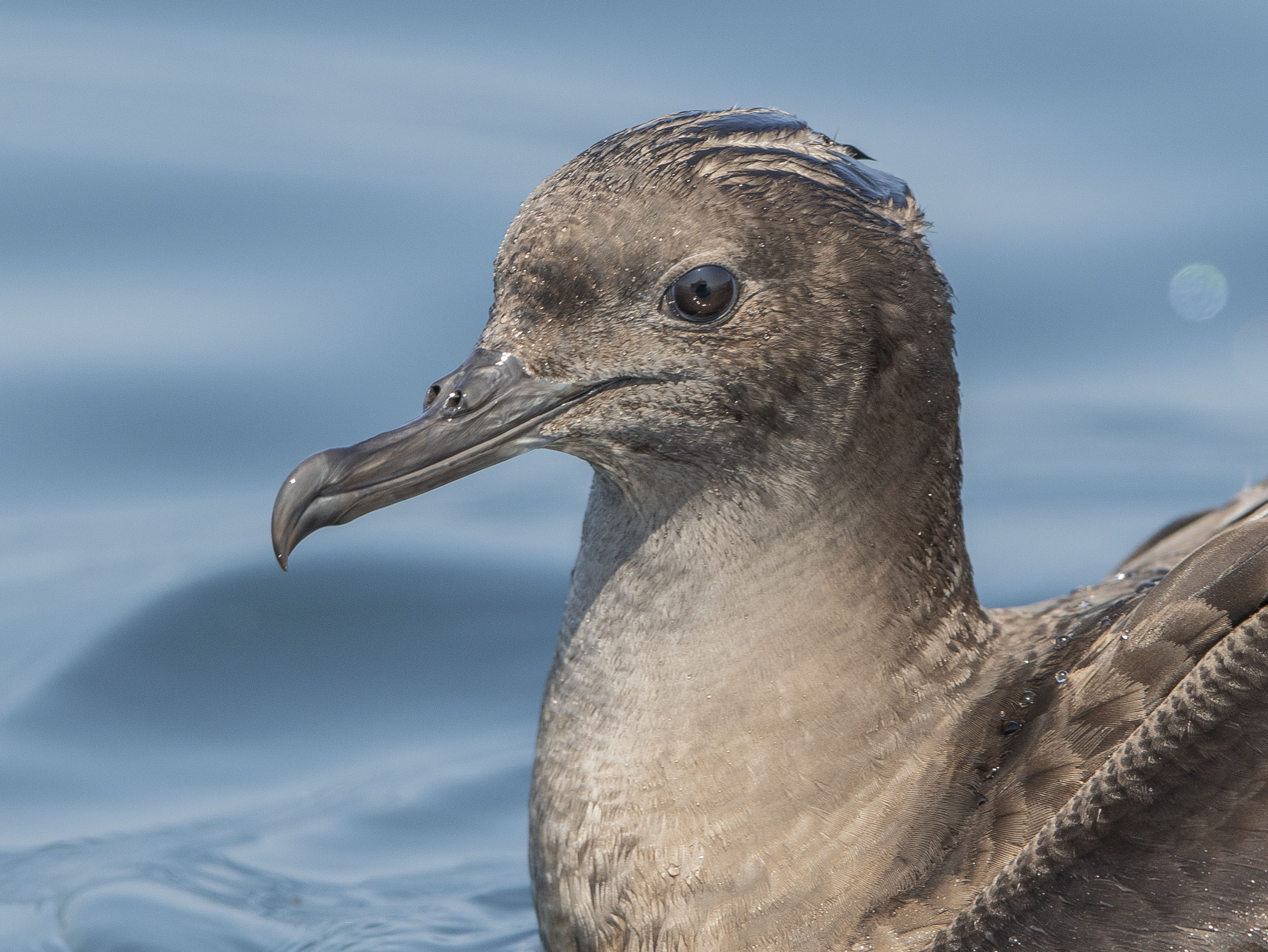 Birds in the family Procellariformes (which includes albatrosses, shearwaters, petrels and storm-petrels) excrete salt through one or two tubes that sit atop their beaks, giving the group the informal name of “tubenoses”. A common misconception among birders is that this tube is an organ used uniquely for excreting salt.

In fact, it’s not clear that these birds process salt any more efficiently than any other seabirds, like pelicans or marine ducks. Tubenoses’ beak structure might help them keep saline excretions from blowing into their eyes in high oceanic winds, but that’s probably not its primary function.

Recent evidence suggests that these tubes help channel airborne scents, contributing to tubenoses’ ability to sniff out plankton blooms on the open ocean. There’s also evidence that the nasal tubes of albatrosses contain pressure-sensing nerves, helping these birds find and navigate the rising air currents they use to stay aloft.

Seabirds’ exquisitely fine-tuned sense of smell serves them poorly in oceans plagued by plastic pollution. It turns out that plastic, especially when covered in marine algae, smells just like the zooplankton seabirds love to eat.

While some seabirds that frequent Massachusetts waters are doing well (like Wilson’s Storm-Petrels and Cory’s Shearwaters) others are in serious trouble. And unlike some declining groups, pelagic birds’ absence flies largely under the radar of most land-bound naturalists. Among myriad dangers, entanglement in fishing gear, climate volatility, and invasive species drive seabird declines.

Help fight these threats by purchasing American-caught seafood—fishery regulations here favor seabirds more than in much of the world— and by reducing plastic waste.

It was gray and overcast, the sea was churning, and the wind was fresh from the Southeast – perfect conditions for watching a parade in early November….and watch we did!  Our viewing location was North Beach on Cape Cod’s back side, all the way from East Orleans to Chatham.

“Marching” in this winged parade were over 40,000 sea ducks and seabirds, all headed southward in a more or less continuous passage emanating from destinations as far away as Alaska, western Canada, James Bay, Labrador, the Gulf of Saint Lawrence, and Newfoundland.  This timeless event was part of the annual migration of vast numbers of waterbirds, all originating in nesting grounds far to the north, and all bound for winter destinations well to the south.

The departure of waterbirds escaping the rigors of sub-arctic and boreal winter is part of a great migratory cycle that has evolved through the millennia into one of the most magnificent autumn spectacles to be witnessed on the Atlantic Coast of North America.  When migration conditions are ideal, the number of birds involved may exceed extravagant! 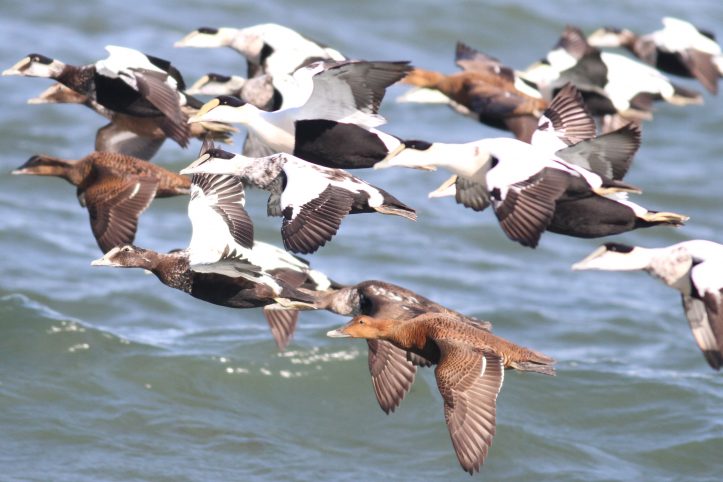 And so it was on November 5, 2017.  Between 8:30 a.m. and 3:30 p.m. my companion and I tallied approximately 12,000 Common Eiders, 18,000 Black Scoters, 5000 Great Shearwaters, 3000 Northern Gannets, 100 Razorbills, 400 Black-legged Kittiwakes, and 550 Bonaparte’s Gulls.  When combined with lesser numbers of numerous other species recorded that day, we estimated we had seen over 44,000 waterbirds in approximately seven hours of more or less continuous watching!

The dynamics and precise timing of such movements varies from species to species, but the net effect is unequivocal—the birds moving under such conditions are singular in their purpose, and all are taking advantage of weather frontal conditions and wind directions in ways that will maximize their migratory efficiency.

All this motion, and all headed in the same direction, even though few were bound for the same precise destinations. 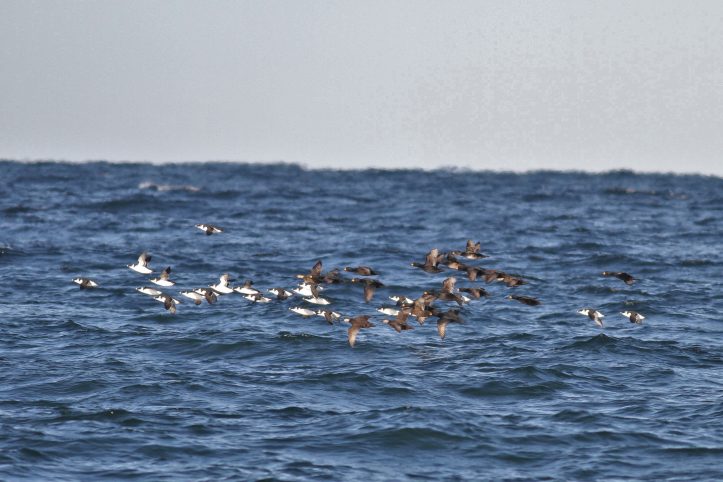 Where are they headed?

Many of the Black Scoters and Common Eiders are likely headed for the shallow shoals off Monomoy or Nantucket where great submarine beds of blue mussels will sustain them through the winter. Other scoters however might not stop until reaching New Jersey or shoal waters off the Mid-Atlantic Coast for the winter.

The Northern Gannets will likely precipitate out along the continental shelf all the way from Cape Cod to the Gulf of Mexico. 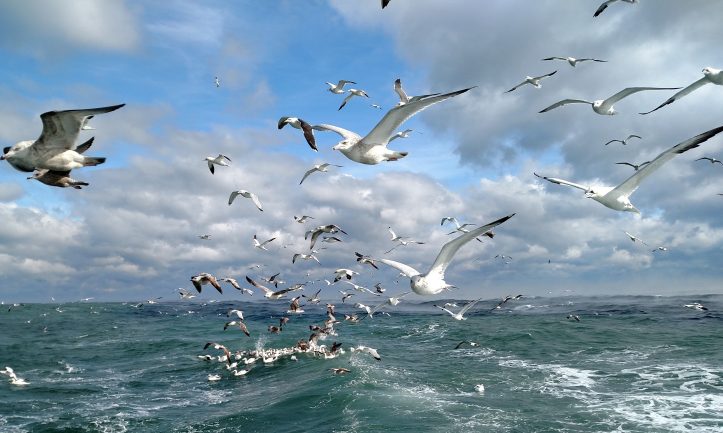 Most of the Bonaparte’s Gulls will no doubt spend the winter from North Carolina’s outer banks to Florida and the shores of the Gulf of Mexico.

The Great Shearwaters, however, will not stop until they arrive at their austral summer destination on the Patagonian shelf off Argentina, or the remote archipelago of Tristan de Cunha.

So many birds and so little time to accomplish these epic migrations!  However, for land-bound observers privileged to live in a region where these avian parades are seasonally visible from shore, these great waterbird movements represent one of the most dramatic natural parades to seasonally be observed in Massachusetts.

So the next day a brisk east wind is blowing on the heels of a cold front, grab a pair of binoculars and head for the nearest coastal headland!  You won’t be disappointed.