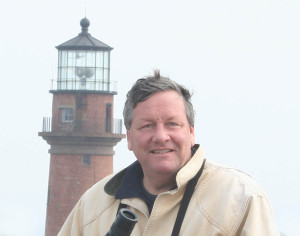 Vern Laux,1955-2016. Thanks to Lanny McDowell for providing this photo.

Both the world and the birding community lost a superstar to cancer with the passing of Vern Laux on Nantucket last month. Vern Laux was at once a newspaper columnist, a radio personality, an author, an educator, a tour leader, a master birder, a champion of birding and bird conservation, and a larger than life personality. Like a little boy in a giant’s body, through the years Vern’s infectious enthusiasm for people, birds, and birding never ceased to afford him a devoted following.

From his youthful days running birding trips on the outer beaches of Cape Cod for Wellfleet Bay Wildlife Sanctuary and driving zodiacs for cruise ships in Antarctica, to routinely making stunning birding discoveries like finding the first North American record of Red-footed Falcon on Martha’s Vineyard in 2004, and more recently establishing and organizing the Nantucket Birding Festival for the Linda Loring Nature Foundation, Vern always had an enthusiastic following and was usually at the head of the line.

Always outgoing, willing, and uniquely able to share his vast knowledge of birds with any and all who were interested (and even some that may not have been!), Vern was a virtual Pied Piper, and more than once overheard comments included remarks like, “See that big guy over there with the red knit cap on. He is both a hoot and a truly amazing birder!”, or “Vern must be bionic! How did he ever spot that bird?” To see Vern Laux at his best was to stand atop the Aquinnah cliffs on Martha’s Vineyard at first light and watch and listen as he reeled off the names of tiny migrant birds in flight by both sight and sound at seemingly any distance, or to listen as he described with Howard Cosell- like precision and humor the pursuit of a tiny warbler by a streaking Merlin. Vern could hear, see, and describe to others things that seemingly no one else around him could – he was truly a master of his craft.

Thanks in no small part to an outstanding junior high school science teacher that he encountered while growing up in Wellesley, he was early on captivated by birds – an interest he maintained with a passion for the rest of his life. To all (and there are many) who came in contact with him, or were touched by his zest for life, he will forever go down as “one of the great ones,” and he will surely be missed by all who were fortunate to know him.

5 thoughts on “A Tribute To Vern Laux”