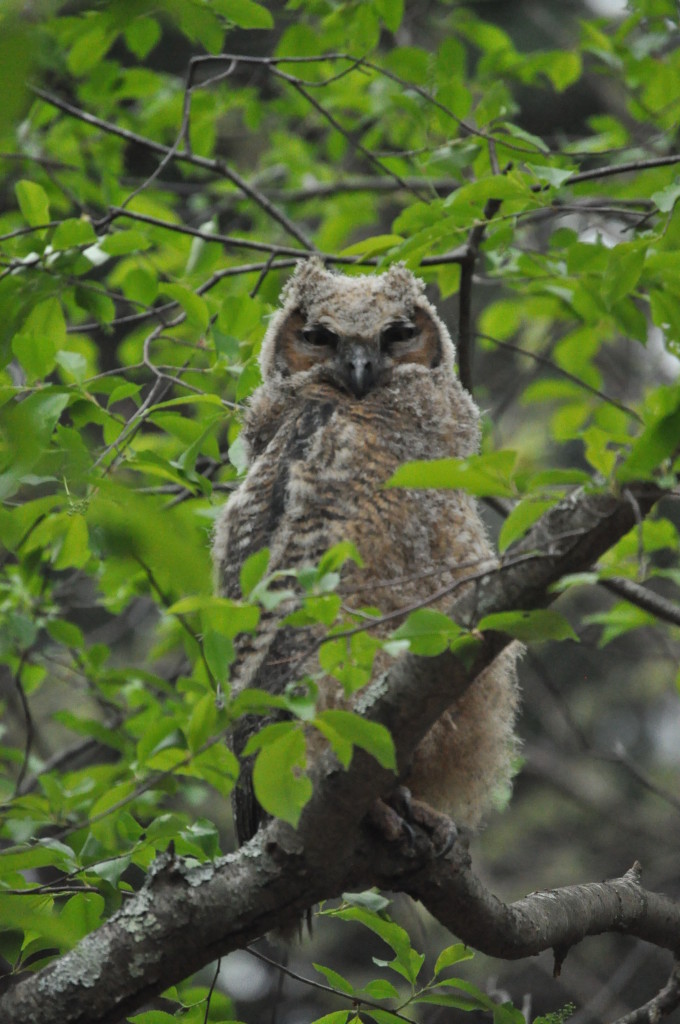 A great horned owl (GHO) fledgling was spotted at the top of the drumlin early this morning!

GHOs are one of the most common species of owl in North America. Usually found in woodlands, swamps, orchards, and pastures, they have also been known to nest in deserts, wooded parks, suburban areas, and cities. Out of all North American raptors, GHOs have the most diverse diet, eating everything from tiny rodents to other raptors. They also eat fish, ducks, skunks, geese, crows, hawks, ravens, reptiles, insects, porcupines, gophers, house cats, and other owls.

GHOs have several traits that make them such incredible hunters. Firstly, their talons are so strong that they require a force of 28 pounds to open when clenched. This allows them to break the spine of their victim. They also an abundance of soft feathers that keep them warm in harsh weather and also muffle the sound of their flight, allowing them to better surprise their prey. Other advantages include excellent vision, due to their large eyes, and superb hearing, due to facial disc feathers that send sound to their ears.

As seen in the photo, GHO fledglings are covered in down, and have the same large, yellow eyes that adults have. As this fledgling matures, it will grow ear tufts, and will continue to become heavily barred on its belly and patterned on its back. Although the tone varies, mature adults are usually a gray-brown color with reddish brown faces.

According to the most recent Mass Audubon State of the Birds report, great horned owl populations are likely to increase in the near future, so keep your eyes an ears open for these birds in your own neighborhoods!