A Season With The Terns

I first visited Great Gull Island as a volunteer in 1980. I was an undergraduate at Southern Connecticut State College, and had friends who worked on the island. I went out for a weekend, and like many others, I never really left. Sure, I’ve gone off and worked in Georgia, on the Farallones, in Cape May, and for Mass Audubon, but there is something about this place that never leaves you.

This year, the project celebrates its 50th year of full-season tern research. I wanted to go back and indulge in a full summer once again. I arrived on April 22 for an 8-week stint, which meant that for the first time, I saw the birds arrive fresh from their wintering grounds in South America. On a cold and grey April 29 morning, burrowed deep into my winter-weight sleeping bag I heard one tern, then a second calling. I raced outdoors, camera in hand, and got a video of them drifting through the clouds, calling as they came home. 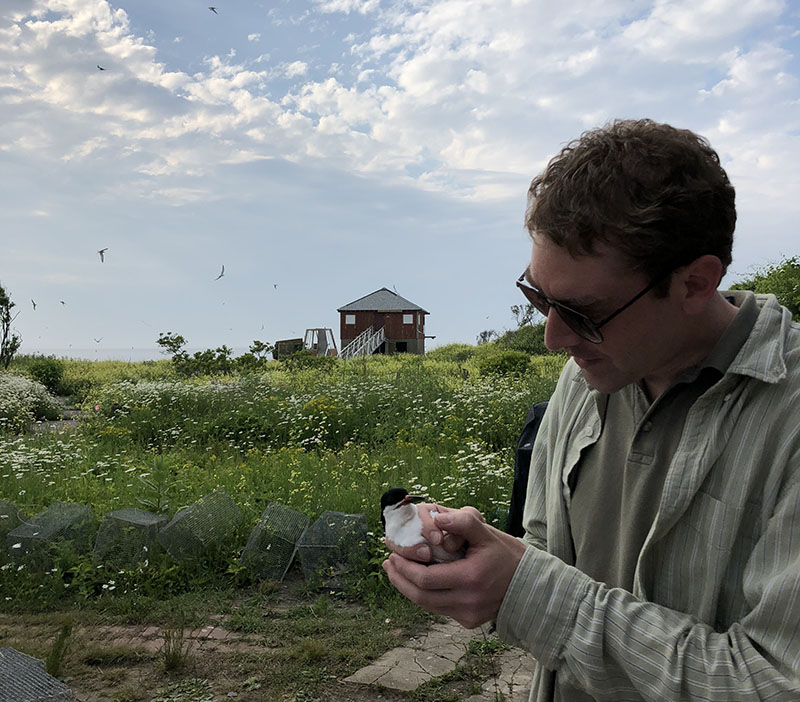 A tern and a bander on Great Gull Island. Photo by Joan Walsh.

A quick check of eBird records showed very few had been reported south of us before they came home. Had they flown over water most of the way? Was the last place they saw South America? Did they fly directly to their island? The details of the transit were important to my science brain, but the shimmering white birds falling from the grey sky, calling for their 20,000 neighbors, was one of the most powerful natural moments I have ever witnessed.

They come back slowly – just a few at first, coming in in the morning, the numbers, and noise, building each day. At first they fly in tight flocks, looking more like a group of migrating Red Knots than terns. They leave at midday to go forage, then return at night and through the early morning. Then, one day you realize they aren’t leaving, and some are even courting, then more, then more.

Their tentative residence is no longer. They are home, and they are fierce.

Great Gull Island seems unremarkable at first: 19 acres of sand and rock, formed as so much of our coastline was by the terminal moraine of retreating glaciers 10,000 years ago. The island is tiny— about half a mile long and a quarter mile wide.

The island sits in some of the roughest waters in Long Island Sound, between Plum Island and Fisher’s Island, NY. Each outgoing tide drains Long Island Sound of 2-3 feet of water, and about half of that water comes past Great Gull. A typical tide rushes by at 5 knots; a strong tide moves even faster. The sea is often heaped into 4 foot standing whitecaps, giving the water to the east of Great Gull the title of The Race, and to the west, Plum Gut.

The currents are so strong that sandlance and small herring can’t swim well against them, making them easy prey for lurking striped bass and bluefish. The currents also put baitfish at risk from aerial predators, which is one reason Great Gull Island hosts up 30,000+ Common and Roseate Terns during the summer breeding season.

In profile, the island shows a tall “hill” to the east, a flat meadow in the center flanked by another hill, and a long meadow towards the west. Much of the island is lined with huge granite boulders, similar to those used in jetties along the rest of the coast. In the summer the Island sprouts 20 or more small white-topped towers used as blinds for watching nesting birds. This, coupled with severe signs warning “DO NOT LAND” give it an otherworldly appearance – a mysterious place clinging to the bedrock as tide rush by, and thousands of birds swirl and scream overhead.

The two “hills” seen in profile are anything but. They are the remains of a US Army coastal defense project. Great Gull was re-christened Fort Michie when the Army ejected the resident tern colony and began construction of a fort in 1896, which they occupied through World War 2. At one point hundreds of men lived on the island in a self-contained small town, complete with electricity, running water, and a hospital. The remains of the coastal defenses are still in evidence everywhere. Most notable are those cement “hills,” honeycombed with tunnels where armaments were stored.

These tunnels, and 6 gun emplacements, are still standing around the island. And the biggest of them all is the massive gun emplacement that held a 16 inch gun – it actually took a shell that was 16 inches in diameter. Three brick officer’s quarters also remain, and two concrete watch towers are still standing. The rest of the fort was reclaimed by the weather or demolished by 1960.

The Return of Nature

After World War 2, the Army sold the island to the American Museum of Natural History for $1, and for the most part little was done on the island for about 10 years.

In the early 1960s, the island was visited by a group of ornithologists from the American Museum of Natural History. One woman, Helen Hays, saw the island’s potential as a research site, grabbed ahold of her work, and 58 years later is still directing the research on Great Gull Island (GGI). A handful of Common and Roseate Terns had begun to colonize the retired US Army fort, and the visitors, being curious scientists, hatched a plan to return Fort Michie to its former natural glory (and name).

At GGI, Helen Hays has managed thousands of volunteers to amass one of the longest runs of known-lineage data in the world. It is not hard to trap a bird, read the band, and follow that bird’s lineage back to 1980. This is done by daily nest searches, aided now by GPS locations for all nests. A subset of the adult birds are trapped and banded, and as many Common Tern chicks are banded as possible. Roseate Terns, as federally endangered species, have stricter rules for handling. All nests are marked, but a very limited number of adults and chicks are handled.

Despite the presence of the researchers the colony has flourished. Hundreds of papers have come from the work, and each year more questions are brought to the forefront. Helen has encouraged work by independent researchers, and has mentored thousands of ecologists, despite managing one of the most complex research stations on the eastern seaboard.

Four years ago I began a series of simple observations on Common Tern. We had done them in the past, but what would a repeat show? I select a set of nests, and for two hour intervals record the time of each fish delivery to the young. I identify the fish, and estimate the size. Each year I choose between 10 and 30 nests to watch. Preliminary work with the data showed really impressive changes in the feeding rates for the nestlings. For two years we recorded fairly similar feeding rates – each nest received about 1.1 per hour. But in 2018 that rate tripled to 3.3 fish per hour per nest. These data support the anecdotal observations we had on GGI this year – there were a lot of fish!

Data like these are important for understanding the variability in chick survival, and can act as a surrogate for understanding changes in fish populations. Coupled with the long-term research on annual productivity and survival rates on the island, this helps us to flesh out what is happening in Long Island Sound from year to year, and as the waters warm due to climate change. 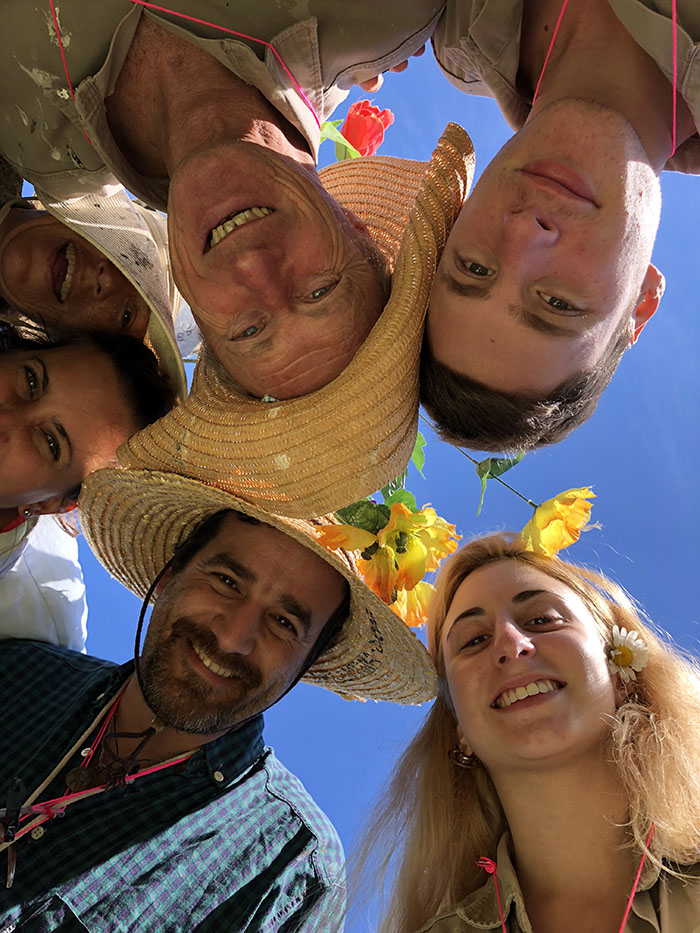 A team of researchers from Argentina that visits Great Gull every Summer. Photo by Joan Walsh.