Audio playbacks (playing pre-recorded bird song) have been increasingly used as a means of re-establishing many species on former breeding sites or at sites that can be easily protected from various threats. In general, the songs or calls from individuals of the same species can indicate good habitat and encourage other individuals to settle and breed there too. This conservation tool has now been used successfully to attract over 20 songbird species throughout North America including Black-capped Vireos, Baird’s Sparrow, Least Flycatchers and Henslow’s Sparrows. 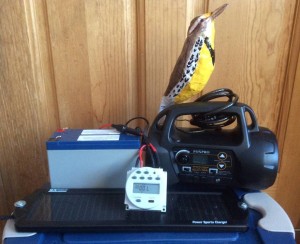 This summer, we will assess whether this conservation tool can be used to attract Eastern Meadowlarks, which have suffered one of the sharpest declines of any grassland bird species in Massachusetts. We are busy creating automatic, solar-powered playback and decoy systems that will be deployed soon. This experiment will be conducted on two of our Sanctuaries where Eastern Meadowlarks have historically nested: Daniel Webster Wildlife Sanctuary in Marshfield and Allens Pond Wildlife Sanctuary in Dartmouth.

Keep and eye on this blog for progress updates. We are very excited to share our results with you and to see meadowlarks and other grassland birds thrive on our sanctuaries!