The colorful bursts of flowers and the familiar smell of thawing soils that we all associate with spring is always accompanied by the wonderful sound of bird song.  There is nothing quite like waking early enough to experience the dawn chorus, where male birds, representing a slew of different species, are persistently singing to secure a breeding territory and attract a mate for the season. 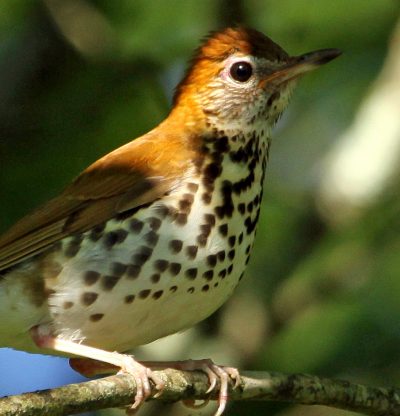 The beauty and complexity of these songs is attributable to a unique organ that most birds possess, called a syrinx.  Located where the trachea – commonly known as the windpipe – splits into the bronchial tubes before entering the lungs, the syrinx has two symmetric halves, each capable of producing sound independently.  This enables songsters to make seamless changes in pitch, articulate a complex burst of short notes, and even sing two tones at once.

Some of our most impressive singers are the thrushes.  This family (Turdidae) includes species such as the American Robin and Eastern Bluebird, but perhaps the most impressive singers are those which inhabit deep forests.  Some of these songs, such as the Wood Thrush’s and Veery’s, are featured on the following website, where you to listen at regular speed as well as slowed down:

When you slow the songs down you can really hear the intricacies.  Put some headphones on to really have a close listen, and maybe you will have a fuller appreciation the next time you hear a bird singing.