For several weeks the sandy beaches at Race Point and Herring Cove Beach in Provincetown have witnessed a spectacular and practically unique confluence of seabirds and fish.  The players in the P-town saga have been Atlantic menhaden (Brevoortia tyrannus) and Great Shearwaters (Ardenna gravis).

Great Shearwaters are Ring-billed Gull-sized seabirds that maintain their breeding terminus at Tristan de Cunha, a remote archipelago located deep in the southern hemisphere approximately halfway between the tip of southern South America and Cape Horn in South Africa.  Annually most of the world’s population of Great Shearwaters migrates north across the equator to spend the austral winter in the northwest Atlantic Ocean. By late summer most of the adult population has begun the long return journey back to Tristan du Cunha to nest, but the non-breeding sub-adult population regularly remains in North Atlantic waters until late fall.  While in the northern hemisphere Great Shearwaters typically remain on remote fishing banks far off the New England and Atlantic Canadian coasts where they forage on baitfish such as sand lance, capelin, sea herring, or squid and fish bycatch obtained by tracking commercial fishing vessels. 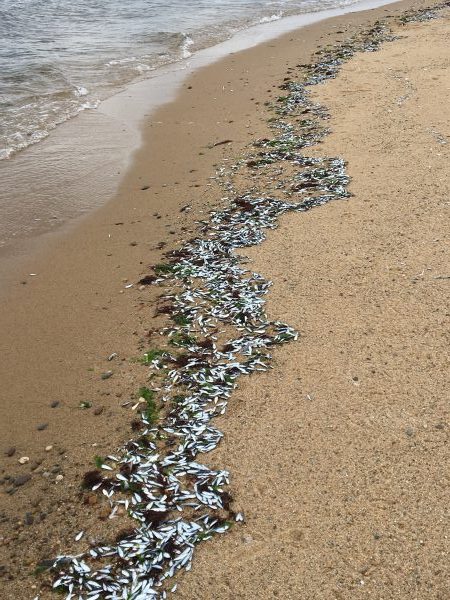 Each high tide left behind a swath of dead menhaden.

Menhaden are a super-abundant forage fish often characterized as one of the most commercially important fishes occurring along the Atlantic coast of the United States, particularly from Massachusetts to the Carolinas (Bigelow and Schroeder’s Fishes of the Gulf of Maine, Collette & Klein-MacPhee, eds., Smithsonian Press, 2002).  Due to their super abundance, immature Menhaden typically less than 2” in length are important fodder for a variety larger predatory fish, marine mammals, and seabirds.  For reasons not always clear, the literature suggests that they are periodically subject to mass late summer stranding and mortality events. These mortality events most often occur in shoal water habitats such as the heads of tidal creeks or small coves like the Herring Cove area in P-town where they may suffer from oxygen depletion or are driven ashore by predators (op.cit.).

Regardless of the explanation, a massive menhaden mortality event took place during the last couple weeks of August and early September.  Most notable however was the fact that unprecedented numbers (i.e., many thousands!) of Great Shearwaters appeared inshore to feast on the abundant fish.  For many days in a row, on each falling tide the voracious shearwaters literally swarmed in the surf picking off the tiny fish like popcorn. For a normally completely pelagic species that spends most of its life out of sight of land, this behavior was most unusual and provided birdwatchers, fisherman, and beach-goers a rare opportunity to observe these interesting seabirds at literally pointblank range!

Check out this video to see what this phenomenon looked like. 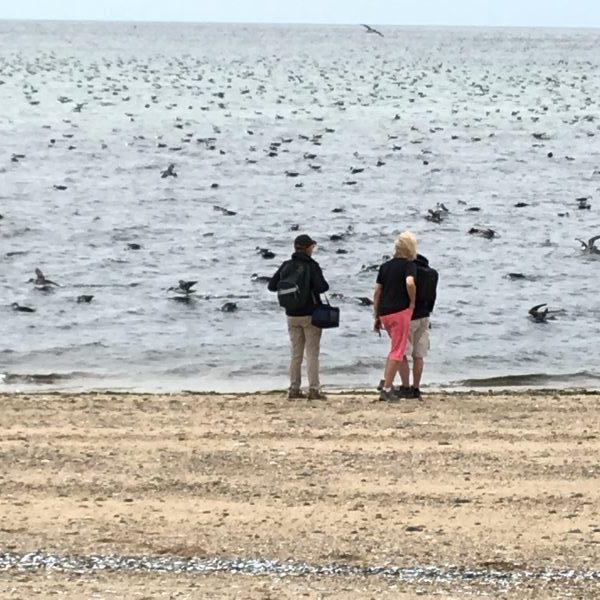