Have you ever noticed that the progression of fall foliage follows a natural schedule? Certain plants become colorful early in the season, and others take their time. Here’s a quick viewer’s guide to autumn color changes. 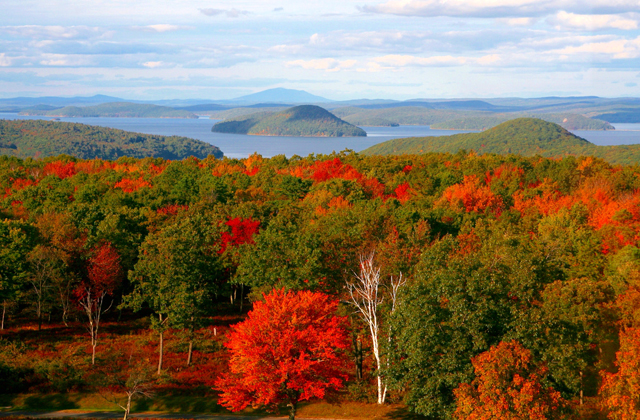 Early foliage changes can happen as early as mid-to-late September. The red maple is one of the first trees to become vibrant, especially if it’s stressed by illness or harsh conditions. Some commercially available red maple cultivars turn red especially early—look for bursts of crimson in urban spaces such as parking lots.

The white ash is also quick to show its purple color. Down on the forest floor or twining up tree trunks, Virginia creeper often becomes vibrantly red while its surroundings are still green. Poison ivy also quickly picks up rainbow of colors.

Oaks and aspens tend to change a little later in the season (mid-to-late October). The American larch, which you may see in boggy areas, also takes its time to turn bright yellow. Later, it’ll drop all of its needles; it’s the only conifer in our region to do so.

Once most of the leaves have fallen and the woods look more open, you’ll spot radiant hickories, their brilliant yellow-gold foliage practically glowing in the woods. The American beech also turns gold later. Rather than falling, many beech leaves dry up and cling to the branches all winter, and you’ll hear them rustling in the wind.

But Everything Depends on the Weather

The timing of leaf color change depends on several factors, including the health of a plant and its growing location. One of the most important variables of all is the weather. Low temperatures, rain, wind, and snow can cause leaves to drop quickly before they have a chance to reach their full color.

When conditions are right, though, there’s nothing like watching the progression of fall foliage in New England forests. See for yourself and join one of our fall foliage programs.

6 thoughts on “The Timing of Fall Foliage”