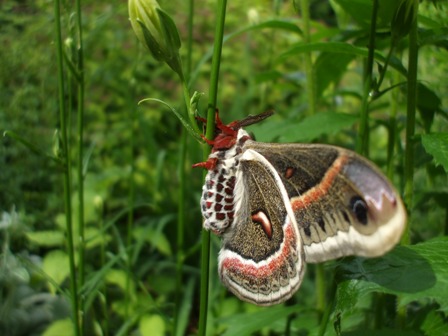 If you’re under the impression that moths are dull creatures who eat holes in sweaters, you haven’t encountered a giant silk moth. Luna moths, Promethea moths, Polyphemous moths, and Cecropia moths are all native silk moths of the subfamily Saturniinae.

These amazingly large, stunningly beautiful moths are found throughout Massachusetts, but we rarely see them. Flying mostly at night and spending much of their lives as caterpillars and cocoons, these moths fly under the radar. Observing one in action is always a WOW experience.

Life Cycle of The Cecropia Moth

In late May and early June, adult Cecropia moths (pictured above) emerge from their cocoons. With a wingspan of 5 to 6 inches, the Cecropia moth is the largest moth in North America. Adults are born without mouth parts, do not feed, and have one job: to mate and reproduce. Males have large feathery antenna, which can pick up the scent of a female from a mile away.

After mating, females lay more than a hundred eggs, usually in small rows on the underside of leaves. Around 10 to 14 days later, tiny black caterpillars emerge. The caterpillars are eating machines and feed on the leaves of many common trees including cherry (a favorite), sassafras, lilac, ash, apple, poplar, and willow.

The caterpillars go through 5 instars (i.e., skin sheddings), and grow very large. By the 5th instar they’re often at least 4 inches long and thicker than an adult thumb. They are also remarkable looking, with a frosted green coloring and red, blue, and yellow knobs extending from their bodies. Children often remark that it looks like ladybugs are riding on the caterpillar’s heads! 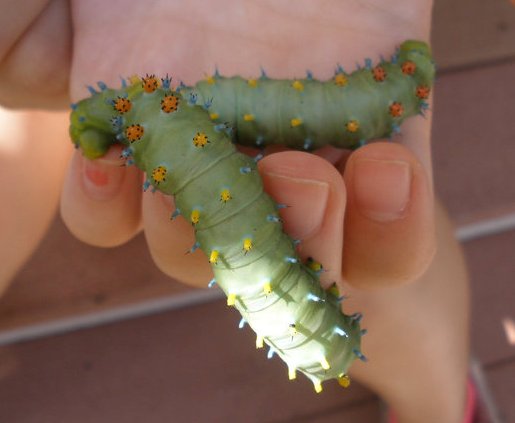 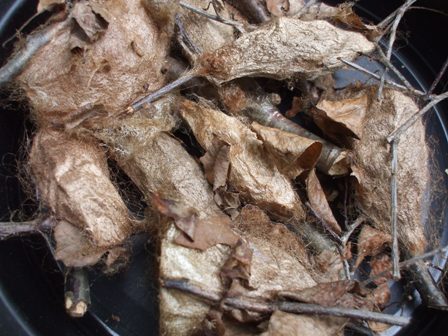 Sadly, Cecropia moth numbers appear to be in decline due to habitat loss, pesticide use, and parasitism by a tachinid fly introduced to control the Gypsy Moth. (See Boettner et al, 2000). Maintaining a pesticide-free yard full of native plants and natural spaces is one way to help these amazing creatures. Some people go a step further and raise silk moths to increase their numbers, a labor-intensive and rewarding experience.

Join a mothing or insect program at a Mass Audubon wildlife sanctuary near you.

18 thoughts on “The Secret Life of a Giant Silk Moth”