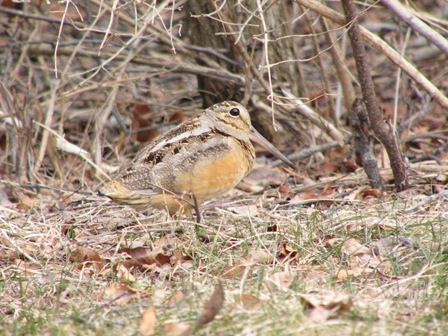 It’s an annual rite of passage. As the snow melts away and the first traces of greenery return to the woods of New England, our breeding birds begin the courtship process. And no bird is more of an exhibitionist then the American woodcock.

Early March, these elusive birds gather at the forest’s edge to perform their famous “sky-dance.”

It goes something like this: First, male woodcocks utter a distinctive one-note peent call with a buzzy, nasal quality. They then flutter high into the air and circle repeatedly, allowing the rushing air to rise in a winnowing whistle as it passes over their wings. To finish off, they acrobatically descend back to the very same spot they took off from and repeat the process in the hopes of attracting a female.

Also known as Timberdoodles (timber, for their woodland habitat, doodle because they look somewhat silly), these plump, mottled forest birds might resemble grouse or quail at first glance. However, it’s their long bills that betray their true genetic identity as members of the sandpiper family, Scolopacidae. These exceptional bills allow woodcocks to probe through soft mud in search of worms and other invertebrates to eat.

It’s often difficult to spot woodcocks outside of their courtship display. Their plumage allows them to be very well camouflaged when hiding in the leaf litter, where they build their nests and incubate their eggs.

The American woodcock can be found throughout Massachusetts, from the Berkshires to Nantucket. Yet, according the State of the Birds report, there may be trouble ahead for this beloved bird as more old field habitats they depend for their singing grounds are disappearing.

Seeing Them in Action

The courtship flights of the American woodcock are impressive, and, fortunately, easy to observe. Just as the biting cold of winter begins to abate in late February and early March, the first woodcocks return to the Commonwealth.

Although woodcocks nest in forested areas, they prefer to perform their courtship displays in more open habitat. For this reason, old pastures and the margins of wooded wetlands are some of the best places to look for singing woodcocks. Courtship activity is most intense around sunset, so plan your woodcock excursions to arrive at the singing grounds before twilight.

Need a little guidance? Join an upcoming woodcock program. And check out this great Living on Earth segment, where a Mass Audubon naturalist brings the mating ritual to the airwaves.

4 thoughts on “The Dance of the Woodcock”