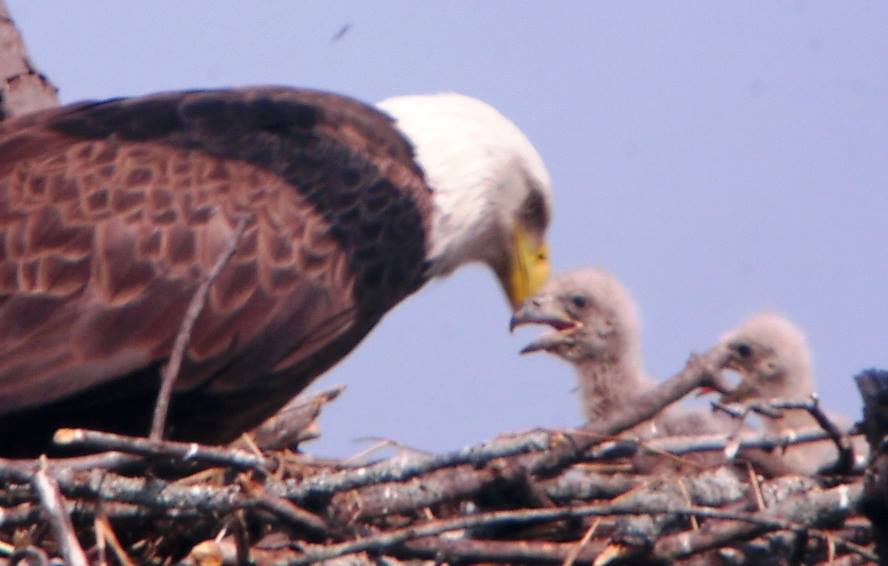 For the first time that we can recall, a pair of bald eagles has successfully bred at a Mass Audubon wildlife sanctuary (Arcadia in Easthampton and Northampton).

This is no small feat and needless to say, we were all very excited. But to really appreciate what a marvel this is, you need to look at the rise and fall and rise again of the bald eagle.

A Look Back
Revered by Native Americans and considered a symbol of strength, courage, and freedom to the European settlers, the bald eagle became a powerful icon of the United States. Yet in the 1950s and 1960s something alarming happened. The bald eagle population suffered dramatic declines, which were linked to the introduction of the pesticide DDT.

Once DDT was banned in the 70s, the bald eagle population began to slowly come back. Here in Massachusetts, though, a breeding bald eagle was a rare occurrence. Prior to 1989, the last presumed nesting of this species was at the beginning of the century.

In 1982, however, the Massachusetts Division of Fisheries and Wildlife teamed with Mass Audubon to launch a project to restore the bald eagle as a breeding bird in the Commonwealth. In 1989, two pairs of eagles successfully reared young at Quabbin.

In the years that followed, the number of nesting eagles has increased and spread across the state. In 2010, 17 bald eagle nests in Massachusetts produced a total of 28 chicks who survived the nestling stage and fledged.

The Present
In 2012, a pair of bald eagles built a nest and produced two eggs at Arcadia Wildlife Sanctuary. Sadly one egg never hatched and the other nestling didn’t survive. This year, though, we had a much happier ending. Two eaglets successfully hatched, were reared, and most recently fledged the nest.

Keeping a close eye: Mary Shanley-Koeber, sanctuary director at Arcadia. Mary, who has been with Mass Audubon for 30 years (26 years as sanctuary director), is retiring this fall and she couldn’t have asked for a better send off.

View a photo slideshow of this year’s eagles and share your eagle sightings and experiences in the comments!

8 thoughts on “Return of the Eagles”