When it snows, something magical happens: you can peek into the lives of many secretive creatures by examining the tracks they leave behind. Tracking is about more than just following an animal’s trail. It’s about discovering the natural world around you while sharpening your powers of observation.

Like any skill, tracking takes practice. Here are a few basic things to keep in mind:

Now that you know the basics, let’s identify some common tracks you may find: 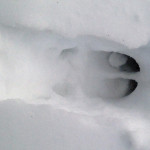 These hoofed creatures leave pointed prints with a split down the middle. Deer also have two toes higher on the leg called dewclaws that sometimes appear in the print (see them to the left of the photo). The two largest pointy hooves point in the direction of travel; this deer was headed to the right. 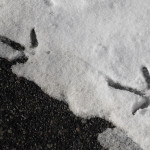 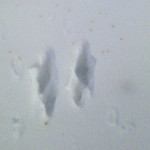 Here’s a case where the pattern of the prints is more useful than any individual print. When a squirrel hops, it puts down its smaller front paws side by side first (the shorter dashes) then puts down its larger hind paws directly in front (the longer dashes). 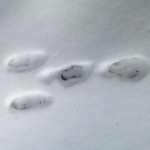 Rabbit tracks look a bit like squirrel tracks, but the two smaller front feet are placed one in front of the other, rather than side by side. This animal was traveling from right to left.

This post just scratches the surface of animal track identification. It’s a complicated art and science; experts can uncover amazingly detailed stories from clues like stray hairs and places where tracks from two species meet. Find out more by attending one of our tracking programs.

Also, browse a selection of guides for all ages and skill levels at the Audubon Shop in Lincoln, including Big Tracks, Little Tracks: Following Animal Prints for 3-6 year olds, the Science on a Tracking Expedition kit, which is packed with games and activities, and the North Woods Animal Tracks Guide, a weatherproof set of ID cards on a keychain.

What natural secrets have you uncovered through tracks?

4 thoughts on “Get Started with Wildlife Tracking”