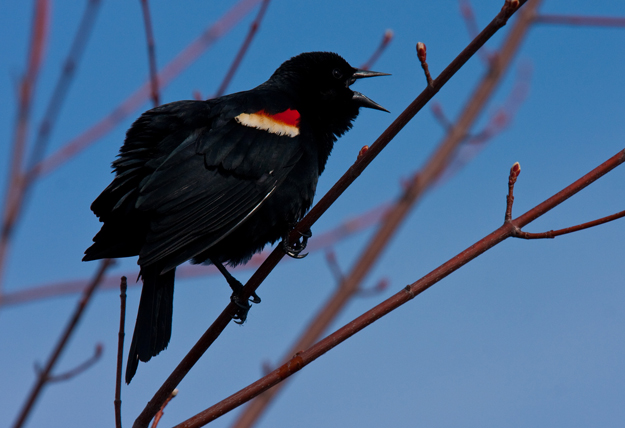 Birds make a wide variety of vocalizations—from the harsh caw of a crow to the shrill screech of a hunting hawk to the ethereal fluting of a thrush. The wide array of sounds that birds make defies easy categorization, but for simplicity many birders and bird guides will refer to bird “songs” and bird “calls.”

What’s the difference, and which birds use what sounds? Matt Kamm, of Mass Audubon’s Bird Conservation team and co-author of the Breeding Bird Atlas 2, explains.

A song is a noise that a bird makes with a specific function, almost always one related to mating. Birds may sing to attract mates, ward off rivals from their territory, or bond with their mates and young. Songs tend to have a definite structure and rhythm, and are often repeated over and over again, sometimes with variations but usually on a single theme.

Birds that sing are usually those that breed in areas where visibility is low—dense forest or jungle, tangled shrubland, or open meadows where the grass grows tall. Sounds makes for a much more reliable signal than visual cues in these environments.

Birds that breed in open high-visibility situations, such as lakes, beaches, and rocky islands, have little use for song. This is why you will seldom hear of a heron, a duck, or a cormorant’s “song.” On the other hand, many sounds that might not sound musical to us are technically songs by this definition—the deep, resonant who cooks for you? hooting of the Barred Owl is one example.

A call, on the other hand, is much more flexible in terms of its usage. Many bird “calls” are short notes or phrases that birds use to convey everyday concepts. For example, a robin’s tut, tut means “danger is near,” and a Canada goose’s honk while migrating means “follow me!”

Many mother birds will use short chips or chirps to keep tabs on their young while foraging together, keeping up a constant chorus of “where are you?” and “here I am” so that families don’t get separated in the dense forest or scrubland.

Some birds have calls that not only warn others of danger, but have different alarm calls for different predators. The very flexible chick-a-dee-dee call given by black-capped chickadees can be used to communicate danger, and some research suggests that the number of dee notes increases in proportion to the danger of the perceived threat.

Many birds have both a song and several calls, and some birds sing multiple songs. Most birds sing primarily during breeding, but some (such as cardinals and house finches) are singing even now, and many birds will sing during spring migration.

Try listening to the birds outside to see if you can distinguish which is which. And tell us what you are hearing in the comments!